Czech Nymphing, How to Get Started

One highly effective nymph fishing technique was, until recently, little used outside Europe. But not any more. This technique has become known as Czech (or European) nymphing.

Using this technique has placed Czech and Polish anglers right up amongst the top performers in World fly-fishing Championships, and in recent World Championships on the winners podium.

So, what is the basis of its success?

First, the angler fishes very close to lies (where trout lie in a river or stream, not the lies told by anglers who cannot find trout lies, and therefore cannot catch them) and fish, with probably only about 5 or 6 metres of line and leader out of the tip. (In fact most using this technique do not use a fly-line.) The leader will be loaded with two or three nymphs, heavily weighted, and this means heavy. 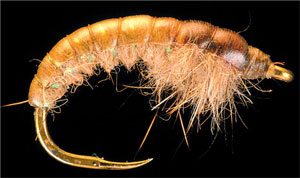 The heaviest fly is generally in the middle of the team of flies. The flies are vividly coloured, wild in fact, plenty of orange and pink. This does not mean that imitative flies are not used, they are, but mixing it up can produce enhanced results.

The size of the flies were pretty large, overall, and do not seem to put the fish off. Because no weight other than the flies are used, the flies must be heavy to get the flies down to the bottom where the fish are typically eating nymphs. The larger flies tend to add more weight.

Despite the extra weight, flies are tied slim to ensure they sink fast.

Leaders are typically one length of line; not tapered. Fluorocarbon line is generally employed, again, because it tends to sink faster. The leader is generally around 3 metres, or the length of the typical rod. This leader needs to be strong enough to account for the fact that a fish is hooked and played very close to the angler.

The flies are positioned 20 inches apart, with the heaviest fly typically in the middle position. The flies are tied on using droppers off the leader. This is usually accomplished by joining two sections of leader with a double surgeon’s or blood knot and leaving a tag hanging off. The most exact fly imitation is usually on the point (bottom) of the team of two or three.

The cast is nothing more than a lob of the weighted flies upstream. Don't try 'flicking' a short cast, your ears will not be happy. I find the best method of 'casting' is (if right-handed) to face downstream, let the line drift down below you, and with the line tight and the rod-tip right at water level, do a 'back-cast', that turns into a forward cast as you swing your body to face upstream.

Three things to watch out for using this 'cast':

Once the flies are lobbed out upstream follow the flies with the rod tip. At the end of the drift allow the flies to lift up to the surface. The angler can actually lead the team of flies through likely looking holding water.

Use an indicator if you must, but it must be small. More often a 2'piece of bright coloured line is tied in to act as an indicator. But, typically, this technique allows the angler to actually feel the take. This is what makes it so effective and why the Czechs are seemingly such great nymph fishermen. An angler also spends more time actually fishing, since his flies stay in the water longer. This for me is a key factor - the longer a fly is in likely water the greater your chances of hooking fish.

There is a downside to fishing this technique.

As for flies, there are a couple
of things to consider.

Generally flies used are slim in profile, have no hackles and no legs. Because you are fishing so close and on such a short line the flies must sink like a rock. The middle fly as mentioned is usually the most heavily weighted, and often the most 'colourful', and may act as an attractant. A gold bead anything could be used on the point fly or a small Glo-Bug, very small. Glo-Bugs - roe imitations) that are too big take far too long to sink. The fly at the top, again, could be a gold bead anything. Another tack is to use bead flies above and below the heavy fly. Bead flies sink fast.

This technique is best used in faster, more turbulent water, or in water where your presence can be hidden behind some rocks, etc. As will be realised this method requires that you are close to the fish and you need the roily water to help disguise your presence.

I can think of innumerable stretches of water I used to walk past to get to the 'good' pools, especially on the Rivers of the central North Island, NZ, and the rivers of the West Coast (South Island, NZ).

The technique can be invaluable if you want to avoid crowds.

There you wade happily pulling in fish while 'experts' wander past making snide remarks to each other about the 'duffer' who can't cast, fishing in the wrong area - experts? Yeah Right!

This technique is not particularly new, it has been used in Poland and Czechoslovakia for many years with references going back to the 1940's. In the US the Charles Brooks book 'Nymph Fishing for Larger Trout' describes a very similar method, and his book was written in 1976. The US "High-Sticking" technique is not a million miles away either.

Whatever you call it, in the right water it really does work. But right there is a sometime downside:

This fishing technique was originally developed to fish smaller mountain rivers and streams for smaller trout. Small fish in tumbling water must grab what food they can, and as such are suckers for a well-presented fly.

In the competitive fly-fishing scene, where fish numbers caught are the deciding factor, Czech nymphing was an instant success. Word spread fast outside the competition world.

In my experience, and as a wide generalisation, Czech nymphing is most successful where fish sizes are generally less than a pound and often much less. If you are fishing waters where catching fish over 3 or more pound is a realistic aim and opportunity, Czech nymphing tends to be much less effective.

For further information see the links below, and a Google search for "Czech nymphing" will reveal many more sites.

There is a link to a website Czech Nymph which sells Czech nymphing products - but before you give it a miss, it does have some good information and clear photos of flies, special hooks, etc.

Legality: You need to carefully check the regulations in the area you are going to fish - i.e. in NZ the number of flies you may fish on the leader varies, even within some license areas. 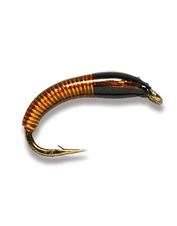 I wrote an article under the above name, to cover how getting a fly down the bottom of a river or stream was a key factor in catching more fish.

To quote from that article: "I soon learnt that if the fly was spending the right amount of time near the bottom, I should expect to lose at least 8 or more flies in a day - but be rewarded for this loss with the capture of more fish. As soon as I learnt how to lose more flies I began to catch fish".

Getting flies down to the bottom is a key to Czech or European nymphing.

"Is that your first trout?"
"Yes it is," I replied, flushed with success.
"Well, it is the most expensive fish you will ever catch."
My excitement at catching the fish disappeared at once.

What had I done wrong?