How to Find Trout After a Flood or Run-off

Waters receding after a flood, run-off or high water offer good fishing opportunities if you know where to look.

It is one of fly-fishing's less than memorable experiences. You travel to the river, arrive at your accommodation, and try to sleep with your head full of the fish you are going to catch tomorrow...

Well you would catch them tomorrow if the river was not recovering from a flood, very high water or run-off. In the morning you are greeted with brown water swirling down the main channel, and spilling out over the banks.

Time to pack up and go home? Well you might, but you could be missing out on some great fishing. It is all a matter of how you look at things.

But before going any further I must issue a warning - a warning you ignore at your very real peril:

Look for trout in all the unusual places

In a flood the prime need for a trout is shelter from the strong currents and flows. At the peak of a flood many trout will die or be badly injured when caught in the main flows and dashed against rocks, sunken timber, etc.  Much of the time shelter will be found out of the main river, in the water spilt over the river banks.

But lies in this overflow water are not always obvious, because they do not necessarily equate to normal lies when the river is at normal levels. 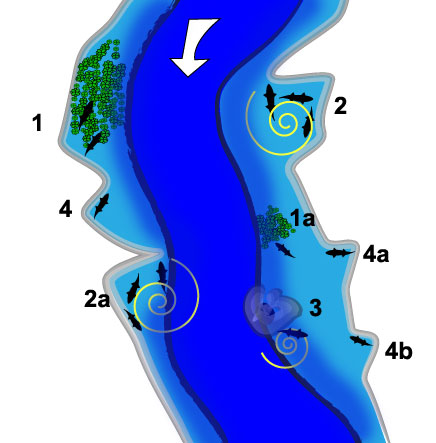 I have attempted to show in the illustration above some of the possible lies where fish may be holding after the flood but still in high water spilling over the usual banks. The dark blue colour is the main river, the usual river bed.

The lighter blue colour represents the water spilt over the usual banks. The spirals represent the current direction behind obstructions.

Nothing is drawn to scale. The over-spilled water may be a few meters wide, or tens of meters.

The green represents, well, greenery. It could be bushes partially or completely under water. It may be a tree, it's lower trunk under water. Maybe it is a clump of weed or long grass. All these will provide shelter from the main flow.

Greenery provides a number of advantages to a trout. The leaves or grass can help to filter out sediment, sand and grit which irritate gills. The greenery will also help to slow currents and provide good shelter.

The greenery also has another advantage - it will filter out nymphs that have been washed away in the flood, and deliver them to the waiting, and by now, hungry fish.

Trout may hold behind the greenery, or right in amongst it, depending on the density of the foliage.

Any obstruction that juts out into the current from dry lad can provide shelter from the flow. The obstruction could be a large rock, a natural ground formation, or a big log, etc.

The thing to note here is that behind any obstruction of this type there will be a 'back eddy'. The current curls around the end of the obstruction and forms a eddy.

In these eddies trout are likely to be facing apparently downstream - but they are in fact facing into the current formed by the eddy.

Food being carried by the flood will begin to sink in eddies as the water slows.

This formation could be a large rock, a tree, a large log, etc. that is surrounded by water. This formation will also form an eddy behind it in the strong flows of a flood.

While it would appear to be a good lie - it is usually no good at all.

Being in the main, or close to the main current, the water will be dirty and full of sediment, sand and grit etc. All pretty much bad news for trout.

This lie is probably only filled by trout escaping from the main flow, and resting till they can move away from the main current and to the other lies shown.

These lies are usually only small and carry only a few fish, more often only one.

Now by small, I mean a mere scoop out of the ground around it, and often overhung by grass or bushes. In these 'scoops' a fish can hold in virtually no current, and because there is no current the water is clear of sediment.

It is in these lies that I usually hook most fish.

When fishing to flood fish it is well to remember that the dirty water can be to your advantage - you may not be able to see the fish, but you can be pretty certain they cannot see you. It is not unusual to get within a rod length of a fish and still not be spotted.

In my experience trout seem to hold higher in the water when it is dirty, than is usual when water is clearer.

I guess that this is because in flood lies we are looking at water that is flowing slower than the main currents and therefore sediment and such falls to bottom more swiftly.

So always fish the top third of the depth first.

In many cases how you cast and where you cast is dictated by the position of the fish. For example if the fish are holding in amongst sunken shrubbery you have limited options.

But a little thinking outside the square may open up some options.

If a fish is holding deep down in shrubbery, grass or weeds, or holding close behind, drifting a big foam fly over them may bring a rise. These fish have been in a flood and have had little opportunity to feed - they will be hungry.

A big bug drifting overhead may bring spectacular results. Water overflowing banks pick up all sorts of terrestrial insects and mice, and carries them along.

A mouse fly can produce explosive hits in dirty water. Don't worry about a 'drag-free' drift, giving  the mouse some movement seems to produce increased bites.

Try and cast as shown. Get in the outer edge of the eddy and allow the fly to be pulled around by the current.

Now it goes against usual wisdom, but do not strip in line as the fly is pulled round towards you. allow the line to swing round in the current and then pull away as it moves away from you.

If you are nymph fishing use an indicator, or a big dry fly as an indicator. In this type of fishing you have little or no idea where you nymph is, as, what is happening at the surface often bears no relationship to what is happening below. An indicator at least gives you a rough idea what is going on below.

Lies 4 - Dapping and other monstrosities

Fishing to lies like numbers 4 is my favourite (well almost - see later) way of fishing dirty water. You can usually get so close to fish you could touch them with a rod tip.

I use two main methods to reach to these fish:

Trying to use a nymph in this situation is often problematical. It is, well in a word - stupid, to try and wade out to a position where you cast up and across to the fish.

Besides the fish are usually holding right up against the edge of the flood bank. You need to be an exceptionally accurate caster to get your flies close enough to the bank.

But you can try a bastard version of dapping - standing just a little short of  a rod length from the lie, flick the nymph on a short leader (3') above the lie and follow it down with the rod tip. You need a well weighted nymph, it must sink quickly. Actually you can use dapping with a dry fly too. 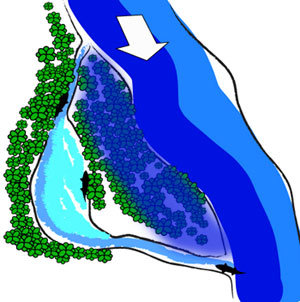 One of the opportunities that sometimes pops up in floods or high water is a side channel filling up and providing shelter for trout.

Sometimes this side water can be an old channel that is cut off from the main river at normal levels.

You can use any of the methods described above to cast to fish or likely lies.

In my experience fishing these side channels is made for terrestrials and mouse imitations.

Often these channels are draining the low lying ground around them and carrying these creatures to the fish holding there. If you don't want to go to fly fishing heaven a worm imitation can be lethal.

Playing a fish in high water

Playing a fish in flood or high water conditions is not a lot different than playing a fish in normal water, but for one major issue. If the fish makes it into the main current you can most often kiss that fish goodbye.

Get used to spending a lot of playing time putting side-strain on the fish - that is holding the rod parallel to the surface to try and keep the fish heading toward the shore not out toward the main current.

On this note,  you will find that you can go up in leader breaking strain several notches above that which you might normally fish. The key here is to get the fish in as fast as possible for release.

What got me started on dirty water fishing?

Be careful out there!

Fishing dirty water after a flood or high water can be very rewarding and it is safe if you are careful and follow the basic rules I outlined at the beginning of this article. Please follow them to the letter. 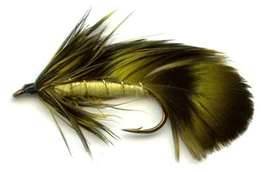 Read more about trout dying for a good photo here.