Find And Spot Trout So You Can Cast To Them

There is probably nothing more exciting in trout fishing than searching for, then finding a trout to tempt with your fly. But spotting trout can be harder than it seems.

I can still remember very clearly the first time I saw a trout when fishing.

I was fishing the Avon River in the heart of Christchurch (South Island, NZ) and I was about nine or ten at the time. As usual I had caught nothing, and was getting pretty close to packing-in this whole trout fishing business.

This day however, a man walking along the bank stopped and during a chat asked me if I could see the trout out towards the middle of the river. I could not, so he offered to help me.

Slowly and carefully he guided my sight to bottom features leading me step by step towards the fish. Still I could not see it – I was beginning to doubt there was actually a fish there.

"Stop looking for the fish", my new-found mentor advised, "look, can you see that dark smudge just to the left of the ribbon of weed".

I looked and I could, and then I noticed that the smudge moved briefly upstream a few centimetres.

Then something truly magical happened, the smudge materialised into a trout.

There is no other explanation – first there was only a dark smudge, and then like a butterfly opening its wings, there was the trout.

"There’s another trout about three yards ahead of that trout," my mentor advised, and now that I knew what to look for I soon found it.

I also found, the trick to spotting fish in water where they might or should be, is not to look for fish.

Fish have spent millennia organising their outward appearance to make it hard for predators to see them. They have become very good at it – so trying to spot a fish is difficult.

It is much easier to look for signs of fish such as a movement, a shadow moving on the bottom, or the white flash of a mouth as a fish feeds.

Concentrate your search on the area where a trout should or could be, and once the bottom and its features reveal themselves, look for something that changes or moves against the background of the bottom features.

Once the position of a fish has been ‘fixed’ by picking up a movement or such, it is often amazing how ‘easy’ it becomes to spot the fish again and again, even after looking away or moving away.

In pools or lakes many fish will cruise or patrol a regular pattern in their search for food. If you spot a fish on the move, stay still and concentrate on the area where you first saw the fish. Very often the trout will move back through this same area.

If you look for fish throughout the total area of water around you, 90% of the time you are wasting your time. Fact is 90% of the water trout live in does not hold fish - fish are usually found in only 10% of all that water.

If you have done your homework, and you have become proficient at identifying lies (the places where trout hold most often), the task of spotting fish becomes much easier, because you have narrowed down the places to look. Looking in the 10% of the water that is likely to hold fish is much more productive.

Another key to spotting fish is to gain height.

The steeper the angle of view, the less you have to compete with the reflected glare off the water. Often it is more efficient to try and spot fish from a vantage point well above the water, and then using marker points, move into position to fish for the fish you have found.

But this is a two-edged sword.

The lower you are to the water’s surface, the harder it is for a fish to spot you, the higher you are above the water, the easier it is for you to be spotted.

When moving into position to spot a fish from height you must move slowly and carefully, using as much cover as possible. and try to avoid being silhouetted against the sky.

If you are trying to spot trout you simply must invest in a pair of Polaroid glasses or Polaroid clip-on's for your prescription glasses. Trying to see into water without Polaroid’s is difficult to impossible.

Lens colour does make a difference when trying to spot fish. For best all round performance amber or yellow lenses cover most situations, and most people.

But the key to lens colour selection is to recognise two factors:

If possible I try to bludge, beg, or borrow glasses of different coloured lenses, to try on the water, before I buy.

I usually carry two pairs of glasses, an amber and a yellow pair. I have other colours that I take out depending on the conditions, or if I know the water is stained by tannin.

These days, special Polaroid glasses with side-light masks cost very little. In fact fish-spotting performance wise I have found very little difference between a NZ$350.00 pair I got as a gift and the NZ$29.95 pairs I often wear.

But I also have to say that at the end of a long day on the water, especially in bright conditions, my eyes are much more tired and sore with cheap glasses than when I have been wearing my more expensive pair.

Here is another trick.

I was guiding an American client who was a very accomplished angler. We had a successful morning spotting and then fishing to spotted fish.

Over the morning I noticed that every time we took a break for one reason or another, he would face away from the direction of the sun and remove his sunglasses for several minutes.

In fact I also began to notice that often when we approached a possible lie he would take off his glasses for a few moments and put them back on as we began to search for a fish.

I questioned him about this and he theorised that over time our eyes adjust to take account of the different light characteristics reaching them, because of the sunglasses. He believed that by removing sunglasses regularly, the heightened ability to detect contrast when you first put on Polaroid’s was re-stimulated.

So I tried it, and it worked, and still works for me.

Yet another little trick for a clearer view

Despite wearing Polaroid glasses, sometimes it can still be tricky seeing through the water, or getting enough contrast to differentiate fish from the bottom. Try tilting your head to one side or the other; this alters the angle of view and can make a marked difference to what you can see.

Polaroid’s do make spotting fish much easier than trying it without them. But fish can be spotted without them – especially if you know exactly where to look.

Some guides’ knowledge of their area is such that they know each lie down to a few centimetres.

They can look in these lies and see if anything is moving or lying there. A few use this knowledge to play mind games with their clients. They do not use Polaroid’s, but still regularly see fish before their clients.

I was once fishing with a guide in the Nelson area, and all morning he, without Polaroid’s, spotted fish before me. As we walked along the bank he would regularly stop and point out a fish – following his directions I would in turn pick up a fish.

But on a couple of occasions I simply could not see a fish where he indicated. He would gaze intently for a moment or two, then say that he was mistaken.

My bovine excreta antenna began to twirl. A couple of minutes after the latest of these episodes, he pointed out yet another fish, which I soon picked up. But then I pointed out "a much bigger fish two metres in front of it, and a metre towards us".

He looked in that direction. "Got it", he said, "very good fish". A very good fish indeed, in fact it could have been the biggest fish I, or indeed he, had ever seen, because it was imaginary. Just my little mind-game.

An Excerpt from Tony's Book, 'Fishing Smarter for Trout'. Which you can now read for free! 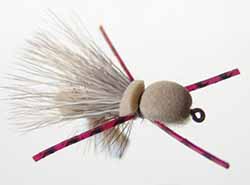 Logs & Hogs in the Fog

"It doesn't look much. Just an itty-biddy stream trickling out onto the beach, but you should see the fish that hang off the little lip of sand, not a rod length from the beach. I saw one there that I thought was a log in the water, till it moved. Biggest fish I have ever seen, an absolute hog of a fish.

I hooked it once but it took off like a high speed torpedo and broke me off. Could not believe a fish that big would be in such shallow water."

I saw far too many illustrations of the truth of this rule in my decade in my tackle store to argue against it.