Do 10 Foot Light-Line Fly-rods Make You a Better Angler?

Are all new rods, merely small advances on a rod building theme?

As an ex-tackle-store owner I guess I got to handle and trial way more fly-fishing rods than most. That included all that was touted to be the latest and greatest.

Fact was that handling so many rods lead to the perhaps jaded view that all new rods were merely slight advances on a rod building theme, and big advances only existing in the persuasive power of the rod-makers advertising and marketing people.

I do know this, the majority of my customers who bought the latest rods, purchased them in the hope they would improve their casting, and therefore catch more fish.

Course this never worked. Investing some time in casting practice, and learning some river craft, with their current rod would have served them better.

But then my cash register needed constant feeding, so I rarely passed on that advice.

Maybe this jaded outlook was the reason for the fact that the rod I used most was a 8'6" Sage RPL+ 6 weight that I bought around 25 years ago. But maybe not.

That old rod just felt right in my hand and over the years new rods that were lighter, with faster actions, yada-yada, just never got a look in. I stress that I did try new rods off and on, even bought a few, but they soon drifted into the back of my fishing gear cupboard, or into the hands of one of my sons.

My 25 year old rod  could pretty much do all I needed or wanted to do when fishing. Mostly.

Then, my interest whetted by a slew of articles in UK fly-fishing magazines on the advantages of 10' rods for lighter weight rods, I took the opportunity to test a Sage Z-Axis 10' 6-weight.

Compared to the RPL+ this new rod was light-speed fast. With the RPL+ I could go into the back-cast, light a smoke and inhale its evil brew into what is left of my lungs, then come into a forward cast.

The extra length took some getting used to.

This new rod, loaded in a split-second and straightened faster.

I was nearly going to consign 10' lightish weight rods to the 'next-big-thing that isn't' barrel, but a chance riverside meeting with a mate who had been using a 10 footer for a couple of years, and a bit of demonstration and coaching, followed by some practice sessions over the next week or two converted me to the long side.

Since then my 8'6' foot RPL+ has been left all sad and neglected in the bowels of my fishing gear cupboard.

Yes, I do occasionally feel remorse about the way I treated it, a sudden divorce after such a long and mostly happy relationship, but sometimes you just have to move on.

Ten foot long, and longer, fly-rods are nothing new.

They have been around for decades in the Spey casting field but mostly as heavy line-weight rods designed to be used two-handed.

One-handed light line-weight rods in 10 foot plus lengths have also been around for some decades in the UK and Europe - fishing from boats in the loch-style still-water scene.

But for stream and river fishing? Not so much.

So what are the advantages of a 10' rod?

I guess the number 1 reason is greater ability to control line on the water.

Longer casts are easier to make with a longer rod, but there are one or two 'buts' in this subject, (covered later).

OK, so back to longer casts with a 10'foot rod. 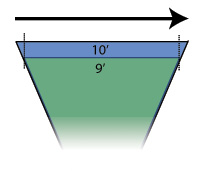 The casting gurus will tell us that the longer the arc the rod tip moves through, the longer the cast. So a 10' rod has the potential to cast further than a 9' rod.

In the diagram here-about, you can see that if you stop a 10' rod at the same place as a 9' foot rod the 10' rod tip will move further.

But using that logic why don't we have 20' rods so we can all cast into the middle distance?

Well there are really long fly-rods used in the UK and Europe, up to 17' - but they are all two handed rods, used for salmon fishing. Longer two handed rods are used in the US steelhead fishery too. But these rods are simply too big, heavy and cumbersome to be cast one handed.

So this brings us to the reason 10' rods are becoming popular now - graphite and its derivatives are leading to lighter and lighter rods. My old rpl+ rod is nearly 2 ounces heavier than my 10' rod. But it is not all about the lighter weight of the rod.

The extra length has a disadvantage.

Because the rod tip and the weight of the line is further away from the fulcrum (hand and wrist) there is more force exerted against the hand and wrist during the casting stroke - and if your cast is not made with good form you will really notice it.

If you cast with a lot of wrist movement, and you really should not, you will be forced off the water with pain.

The other disadvantage is that if you drop the rod tip during the forward or back cast the line will head downwards faster than when using a 9' rod. Not good.

In general, a longer rod will magnify any casting issues you have.

However, if your casting stroke is good, start slow, finish fast, stop dead, using a relaxed style, the line will simply fly from the rod tip.

If you buy a 10' rod in the hope of longer casts, and believe this will somehow deliver more fish - save your money.

Instead, spend time getting your casting technique up to speed on your current rod, because a 10' rod will only magnify your casting faults. Then when your casting is up to speed, get a 10' rod and concentrate on cast accuracy and line positioning on the water. Then you can start catching more fish.