Float Fishing In A Sea Of Anticipation

I must have been about eight at the time, but even from more than a sixty year distance, the tension is still palpable.

My concentration was implacably fixed on the round plastic float.

For maybe five minutes I watched; a long time, for an eight year old, even in those pre-TV 30 second attention-span days.

The subtle movement, maybe a millimetre or two, sent ripples radiating away from the float. Then nothing.

Maybe 30 seconds later the float bobbed again, deeper this time. Then a short time later, the float slipped under the water, and veered off to the left. I lifted the rod, and immediately it bent to the weight of a fish.

Now, I cannot even remember what the fish was, how big, or more likely how small, or even if I landed it.

But that thrill, the bobbing of a plastic bubble, has stayed with me for over sixty years.

Floats can come in a wide range of sizes.

I still have a clear recollection of the first time I saw a balloon float bobbing over a live kahawai bait.

Suddenly the balloon began to duck and dive in short sharp movements across the surface. Finally the balloon disappeared completely under the water, only to bob up a few seconds later.

Except that the balloon was now free to be driven away by the wind. The thin line attaching it to the swivel, as designed, had broken.

The kahawai, until immediately recently, under the balloon, was not so lucky.

It was now firmly attached to a yellowtail kingfish, which in turn was connected to my line.

That kingi was the first to dust me off, but certainly not the last, when ballooning off the rocks, but put a live bait out under a balloon today, and it will still have my undivided attention.

Later, much later, but when Eddie the lad was still at an age when parental suggestions were not only listened to, but occasionally acted upon, I introduced him to float fishing off the rocks. (It was not entirely altruistic, he became my predominant source of live baits.)

I learned something very early in the piece about fishing with kids.

The first thing learnt is no adult fishes with kids. Kids fish, and adults help. The next thing I learnt is young kids have a fishing attention time-span roughly equivalent to the time between average heart beats.

Fishing, to kids, does not mean the whole experience. This excuse for coming home with no fish, but well satisfied, only comes with age, maturity, and a fishing book and magazine fed imagination, with a large heap of self-persuasion and epic levels of delusion.

Throw a handful full of minced bread into some likely water, tie on a shortened bait-fly rig to a float, and it is possible to get some fishing time for yourself.

Floats and sprats or piper (garfish), are an engrossing mix, for small boys.

There is by the way nothing sexist meant by this. From years of observation, I have only very rarely witnessed the same enthrall amongst small girls.

I was not introduced to nymph fishing for trout, until my early twenties. Part of this because nymphing in New Zealand was very much in its infancy, and stained with the general put down of being some new-fangled American invention. The other part was that my fly-fishing mentor, had a terminal purist affliction.

He could only be reluctantly persuaded to wet-fly fish, when dry-fly-fishing was not an option.

'Float fishing' was his nymph put down, 'no real fisherman would ever resort to such barbaric tactics'.

Despite my mentors advice that I would never go to heaven fishing with a weighted nymph and a float, I took it up.

(As an aside, it is now amazing to me how much of the advice from my elders in those days has not come true. I have not gone blind or deaf, despite some early teen advice to the contrary.

The only time I was ever involved in a car accident which led to hospital, no one seemed to take the slightest bit of notice as to whether I had on clean underwear or not.

I have, as yet, been unable to test the nymph and heaven advice, although I have come too close on too many occasions.)

Nymph fishing is float fishing on the move. Concentration must be riveted on the indicator. If it moves, strike, is the word. It is full on fishing, full on concentration. I believe that nymph fishing's popularity has more than a little to do with the added excitement of watching an indicator, ('float' if you must).

Coarse fishing is a form of fishing yet to drag me into its folds.

As a kid I fished for perch in the South Island (NZ) way back when, but in those days it was just fishing. We fished with a ground-bait of bread and chicken-feed pellets.

We used spinning rods, to a float and trace lighted weighted with spilt shot to make the float as neutrally buoyant as possible. Corks were our main source of floats. For very subtle float work, we discovered that waxed drinking straws, pinched and glued at each end, made a workable float. 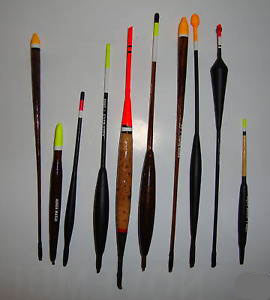 We used fresh bread rolled onto the hook, or kernels of corn, and sometimes pieces of worm. Coarse fishing still awaited importation from the UK.

In Coarse fishing, floats can assume huge importance. It is not uncommon to see a coarse-fisher's tackle box containing up to a hundred floats. (A small sample of floats is alongside). Setting the floats, to meet the demands of a particular situation, is the subject of many videos, books and magazine articles, in England.

More and more of the quieter fresh waters of this country are being rippled by the delicate bobbing of floats.

Float fishing, in its many forms is just plain exciting.

Float fascination may have something to do with the float adding another tangible link between the angler and his prey, adding to the prospect of the feel of a bite through the rod and line.

Maybe it has more to with the fact that often a float tends to move before a bite is felt. There is a visible signal that something is happening deep out of our sight and before we feel the bite. It builds excitement, maintaining and feeding anticipation.

If an angler's attention drifts, there is nothing like the short sharp bobble of a float to spring flagging attention back to rigid concentration, even if the movement is only caught out of the corner of an eye.

That may be the final and most telling clue to the fascination of a float.

Most predators pick up the presence of, and select, individual prey by detecting the unusual. Something, perhaps only marginally different from the background of the usual.

This allows the predator to home in on prey that is easier to catch. Despite years of so called civilization, man remains only a couple of short steps from his predator ancestors.

If you want visible proof of this watch a float fisherman. The float may just sit there, unmoving in oily-calm water. The fisherman may be lolling about apparently inattentive and disinterested.

But if the float moves, even a millimetre, the fisherman turns into the hunter, all attention riveted on the float, and the potential prey below it.