Sometimes the best fishing advice arrives when you least expect it

Most times I fished on those rocks, he sat just back from the water watching the water and anglers, puffing on his pipe. The old man looked to be in his seventies. He usually said very little, but time and many meetings finally dragged out gruff greetings.

This day just he and me occupied the rock ledge. He watched as yet again I fired out the lure and yet again without interruption retrieved it.

Finally he could hold his tongue no longer. "Cast along the edges of the rocks, along the white water," he advised.

"But all the grown-ups cast straight out," I, then a boy, replied.

"That's why you, and they, don't catch any fish! The fish you seek use the white water to disguise themselves from their prey," he advised.

What I was doing was not working, so I tried it, and two or five casts later a kahawai hit the lure. I landed that and several others over the course of the next hour or so.

Then the lure was followed by a dark green torpedo. The rocks beat the kingi in the race for the lure, and it turned away, unwilling to cross that finishing line. I fired out another cast and this time a kingi, maybe the same one, maybe not, jumped on.

My light tackle, and light novice skills were not up to this challenge. Just before my line was stripped from the spool, the line parted leaving me with too little line, and that pretty much was that.

"Bad luck," said the old man, " but at least you learned something today. Find the edges -  find the fish."

Now out of line, I packed up my gear for the walk back to my bike. The old man accompanied me as we walked off the rocks, and along the beach.

On the way he quietly explained to me about fishing the edges. He told me that most of the sea was a desert, as barren and devoid of life as any dry sand desert. Life could only exist where food was concentrated.

A few months later, this time on a river.

My fly-fishing skills were still embryonic at best, but I was flailing away with dogged endeavour. In terms of covering all the nearby water with my lures I figured I deserved a fish, but the fish strongly disagreed. They remained very tight lipped about the whole business.

During a break to munch some sandwiches another wise old head who watched my flailings and failings, offered some advice.

He pointed out areas where currents joined. The scum line, once explained, showed clearly the edges of the currents.

"Fish along the edges of those current lines," he advised. "Fish will hold there, letting the currents concentrate the food in one place."

I tried his advice, and it worked. As my casting skills and line control improved my ability to drift a fly along the edge of currents improved, and so did the number of fish I hooked.

Lake fishing was next in line for a mentor.

Fishing clear water in some of the lakes near Christchurch, South Island, New Zealand, in summer can be a frustrating exercise. The weed banks along the edges were thick and lush. Hooking up on weed was a constant annoyance. So I figured that casting straight out into the lake over and away from the weed would solve that problem, and of course it did. I collected very little weed, and no fish.

Another mentor appeared. This time younger, probably in his late twenties.

A guide, and with one eye on his American clients, he took pity on this youngster, and explained about fishing along the edges of the weed banks.

He told me how trout cruise along the edges of the weed bank picking off nymphs and small bait fish. Casting straight out into the lake meant that my lure was only in the area where fish were for a very short period of time. Casting along and as parallel as possible to the edge of the weed placed my lure in fish holding water for the maximum time.

This new piece of information was put into practice, and yielded a good fish. A good enough fish, for the guide's clients to enquire good naturedly whether I might want to share in the cost of the guide.

A decade on and I learned who pays the Piper

A decade and a bit later, and forty years ago I endured several trips out from the Bay of Islands, towing dead skip baits' (Whole bait-fish rigged to 'skip' and splash along the surface), in the vain hope of a marlin.

The only thing I learnt on these trips was how susceptible I was to sea sickness, and how a young twenty-year-old can let macho pride and a big dose of stupidity override the more sensible option of taking a dose of sea sickness tablets.

Then I was invited out with a very strong minded, and as it transpired, well practised American. His strong will and obvious knowledge finally conquered the charter skipper's  dockside firm-resolve to fish with skip baits, and lures were rigged to the rods.

If the skipper's resolve to use skip baits was strong, his opposition to the fishing methods proposed by the American was stronger.

Not for the American the usual practice of the day of motoring straight out from Cape Brett to the 200 metre depth line and starting fishing. No, he wanted a different tack, and only after much heated discussion about who was paying the piper, he quite rightly, got his way.

We motored about until we found where both a marked colour change and weed line provided clear evidence of a distinct current edge. We then put out the lures and commenced a zigzag trolling pattern, crossing in and out of the warm water into the cold.

Six strikes, and three fish landed, on a day when no other boat caught anything gave our skipper some boasting material in the bar, and a new found enthusiasm for fishing the edges using lures.

Mind you there was some non-believers in the crowd, after all the American insisted on releasing all the fish, very much non-standard practice back then. Marlin on the gantry was the norm, and generally accepted as the only proof positive of success.

In open water - lake, river, or ocean - feed is simply too widespread to be viable as food source to predators by just swimming around willy-nilly.

Anything in the sea, lake or river that concentrates feed in to a confined area, either by geography, i.e. reefs, weed beds, foul ground, headlands, etc. will concentrate the fish that feed on the feed so to speak. So will currents, especially the points where currents meet or merge, or are turned by obstacles.

In the game fishing scene this concept of fishing the edges has taken a new twist. With the aid of sea temperature charts, sometimes faxed to the boat, skippers are able to locate 'warm water eddies'. These eddies are patches of warm water that spin off from the main current and provide a prime source of food for predators. Relatively small in size, and constrained by the cold water that surrounds the eddy, baitfish are trapped in a smorgasbord that provides prime pickings.

Some studies suggest that warm water eddies hold the maximum number of game fish. Find these eddies that spin off the huge ocean currents and you should find fish.

This 'eddy theory' may go a long way to explaining why marlin are often found in patches, patches that move in a sometimes not too obvious relationship to the main current. This can be because the eddy actually spins out and away, in counter rotation to the main current direction

Eddies that spin off main currents and concentrate feed can be found in rivers and lakes. Brown trout, big brown trout particularly, are well known to take over deep eddy pools, where they can feed on the food that is spun off into their territory from the main current. They use their size and strength to bully smaller fish out of these prime feeding lies, (lies as where the fish lie.)

On lakes strong winds blowing around headlands can produce wind eddies on the lee side of the headland where concentrations of wind blown insects cover the water. Trout feed greedily in these eddies.

Most of the ocean, sea and river, is empty of predators. The reason is simple - there is no good reason for them to be there because there is little or no prey. Find the edges where feed and the bait-fish that feed on the food are, and you will find predators. Fishing on the edge is productive fishing. 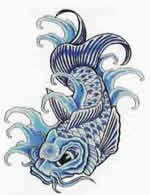