They'd 'had words'. Their faces and body language told the story, even to a casual observer.

Milly's face puckered into that 'I was weaned on a gherkin' look, that some women practise to perfection. 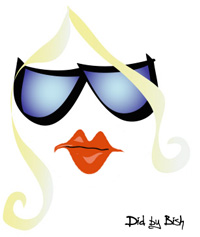 She stared out to sea, her mind a seething riot, as it reviewed events leading to this situation.

At the top of the boat ramp, Ted stomped about the boat, preparing for the trip; his jaw clamped, his nostrils flared.

Ted, realising that full-blown hostilities could erupt at any moment, raised the truce flag, "Don't be silly Milly, you know I love fishing, and it should be a good day tomorrow. That's why I'm excited."

The truce held for 3 or 4 minutes, so Ted was beginning to think the truce might hold, when Milly fired another shot. "You used to take me fishing, but you never do now."

Ted thought, "That was 20 years ago, before we had kids, and she said she didn't really like fishing, and she made me put on bait and take fish off hooks, and, and...'

Ted thought that, but instead said, "Would you like to come fishing the weekend after next?" It just popped out, and there was no way of taking it back.

Milly pounced, "Oh, really? I'd love to."
There it was, set in concrete.

Two weeks passed peacefully, until the Saturday evening before the scene that lifted the curtain on this drama.

The night before the fishing trip, Ted was preparing the boat and fishing tackle.

Milly asked, "Why do you have so many rods? I used a hand line and always caught as many fish as you."

Ted, mind more on a task at hand than Millie's question, without thinking replied "That's because I spent all my fishing time baiting your hooks and removing your fish."

"Ah ah! So you really don't want to take me. I knew it!" she retorted.

Ted recovered the situation somehow, and they sailed through the evening. Ted even endured a two-hour concert of the 'Three Tenors' on TV. Milly beamed.

Next morning, Ted was up first, made lunch and a thermos of tea, and then cooked breakfast. Over toast, Milly innocently enquired, "Would you have time to do a quick cut over the lawns before we go?"

For the whole hour on the way to the boat ramp, they had a wide-ranging, frank, and meaningful exchange of views. Topics as diverse as, in-laws, who spent what, who did what with whom, who ruined the kids, what was said to whom, were all covered, with no resolution on any of these matters.

So, at the boat ramp the atmosphere was a tad tense.

Ted, now finished preparing the boat for the water, brusquely told Milly to take hold of the bow rope and walk down the ramp, as he backed the car down. He would brake suddenly at the end of the ramp and the boat would slide off the trailer into the water. He would drive off and park the car and trailer.

It seemed simple enough, but Milly said, "Ted, shouldn't you..."

Ted cut her dead. "Look I have bloody had enough, just shut up and hold the rope and do what I told you!"

Milly, pursing her lips, cocking her head slightly to one side, and rolling her eyes skyward, sighed a resigned "Okay".

Ted, backed down the ramp, braked hard, and as planned and the boat slid off the trailer into the water. He drove off to the trailer park area some distance away.

When Ted returned, Milly was still dutifully holding the bow rope. Ted took off his shoes, jumped into the boat, landing with a splash. The dropping of his head, and droop of his shoulders, revealed what his feet were telling him - he was standing in water. Looking to the stern, he saw water streaming in through open bung-holes.

"I tried to...," said Milly quietly, caught halfway between gloat and sympathy.

"Don't say another bloody word," hissed Ted, as he strode up the ramp to get his boat trailer.

That was pretty much that. Milly took up golf to fill the hours while Ted went fishing. Things remained friendly between them for years.

That was until Milly, in genuine search of enlightenment, asked Ted, one evening when he was rigging up a new rod and reel for fishing, "Really! Just why do you need all those rods?"

"Probably for the same reason you need nine different clubs to hit the same bloody golf ball, or thirty pair of shoes for one pair of feet" snarled Ted.

That was, as they say, that.

Footnote: The boat-ramp event happened as described, the events before and after were based, let's say, on never letting the facts get in the way of a good story.