Muddy Waters - Of Mud, Mothers, Eels and the Boy

New theories are beginning to emerge about the origin of man. There is, some say, evidence that we first sprung from a different path. A watery path.

According to some boffins, our ancestors crawled from the muddy soup at the edge of land, in prehistoric times. Seals, dolphins and other sea mammals, may be our distant cousins.

So mud and man may be inextricably linked, but the desire to return to the mud burns brightest in the hearts of small boys.

Most small boys have their first contacts with mud, at the bottom of puddles, on the way to and from school. From these first contacts, progression into true mud, the sticky, evil smelling brew that covers football fields and football players, is usually rapid.

But for a select few the muddy path is different. I was chosen.

I spent my pre-teen years in a small coastal settlement, north of Christchurch, NZ, out from Kaiapoi, called Pines Beach. At the bottom of our property ran a creek.

'Creek' is a kind word for this waterway. About 10 meters wide, most of its width was choked with bulrushes. At the deepest point, the creek was about half a meter deep, measured from the surface of the water to the top of the mud, which was up to a meter deep.

The creek was blind. Two kilometres from our house, a culvert held back the water. Filled by a series of drains cutting across the shallow, low lying, former swamp, the creek drained what was now marginal, very wet, farmland.

The mud in this creek was definitive in it's foulness.

It was that oily, steel-blue mud that insinuated itself between the stems of the bulrushes. Disturbing the mud emitted a sulphurous and methane based stench. At irregular intervals, large bubbles of methane erupted from beneath the surface.

If the mud contacted skin or clothes it dried to a steely-gray poultice of cement-like hardness. The mud may have dried, but the reeking stink still pervaded the local area. Clothes fouled by the mud could not be washed with other garments, the pong pervaded everything.

If I ever went near that creek again, I was going to be thrashed within an inch of my life, according to my mother. Mothers and mud have never been a comfortable mix.

But of course I found the creek utterly fascinating. Wandering along its edges, I would watch for the sudden swirling-upwelling of mud caused by eels that slithered through the fetid depths. 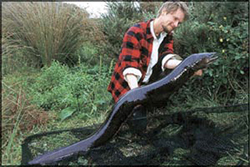 Eels do grow to prodigious size in New Zealand

What eels they were.

Capable of pulling under, not only the ducklings that abounded in Spring, but the duck as well. This I had on the very best authority of our neighbour, the Carpenter.

He said he had heard that someone, he could not remember who, but that someone was very reliable, had seen an eel grab a sheep having a drink, by the ear, and drag it into, and under, the mud. The sheep was never seen again.

I believed our neighbour. Anybody who could get away with saying, "I'm so bloody hungry, my gut feels like my friggin throats been cut," in front of my mother, and not get a belt round the ear, deserved the respect of a small boy.

I resolved to catch one of these eels.

Darkness started to invade. I tied the line to the base of an overhanging willow tree, and headed home for dinner.

Next morning I rushed down to inspect the line. It still hung in the water. I pulled it up, and nothing, nothing at all. No bait, no hook, no sinker.

I returned home with the line. Dad could not believe it. While he was no Arnold Swarchzenagger, he was strong, but he could not break the line.

On the way home from school that afternoon I invested in a new packet of hooks and some sinkers. That night, the line re-baited, Dad, myself and the torch, settled in to wait.

An hour later saw Dad head for home, muttering something about wet grass and piles. I did not have a clue what he was on about. What did wet grass have to do with the things supporting a bridge?

An hour or so later, it may have been sooner, I headed home for bed. My departure had something to do with the sounds of night, and strange muffled splashes amongst the bulrushes.

The thing that sealed my departure however was the 'baaaa' of a sheep. It seemed to come from within the bulrushes.

The line inspection next morning, revealed the same result as the previous morning. The Carpenter, who had joined the hunt, declared that there was "not going to be anymore ponse-ass friggin around with this (don't you use that word in front of the boy, said Dad) eel."

That night a length of quarter inch cord, tied to a small shark hook, and baited, was tied to the same willow tree. A rainy night tested our resolve, and won. The morning line inspection revealed no line. None at all. The 15cm thick branch the line had been attached to had been snapped off.

"Holy (I thought we couldn't use that word in front of the boy, said the Carpenter) Hell', said my Father.

"Bloody hell," said the carpenter, "this thing could pull the mortgage off my house. But we'll fix the bastard. I'll bring home some really strong cord."

Trouble was my close companion at school that day.

The anticipation of the eel hunt to come, pushed school work, and the teacher, well into the background. After school, I raced home, and spent two very long hours waiting for Dad and the Carpenter.

That evening a length of three quarter inch rope, a one meter length of 200kg nylon to the hook, a large piece of lamb, fired out into the water.

We sat down to wait.

An hour or so after dark the line twitched, and twitched again. Suddenly, the line pulled sharply. I grabbed the line, Dad and the Carpenter were diverted by a deep discussion about Saturday's big Rugby game, and pulled. I gained about 2 meters. The line shot back into the water much faster that it had come out. I hung on, and on, right into the water and mud.

The merits of the opposing forward packs, and the fortifying libations that seemed to always accompany such discussions, became a secondary issue.

The Carpenter bolted down to the creek edge, failed to apply sufficient brakes, and slid into the mud.

I still had hold of the line, midway between fish and the knot at the tree. Suddenly, the fish took a right hand turn. I was pulled down under the mud. I let go.

Then I felt something between my legs. I thought it was the carpenters leg, but on reaching the surface, the light from the torch held by Dad revealed the Carpenter some yards down the creek.

I screamed. Dad yelled. The carpenter said that word he was not allowed to say in front of the boy, several times. The line broke with a rifle-shot like crack.

All that noise was quiet in comparison to the noise Mum made when I was deposited outside the back door. It was nearly as much noise as the Carpenter's wife was making next door. It was the first time I had ever heard a woman use that word that adults were not allowed to use in front of the boy.

First I was hosed down, clothes and all. My clothes were removed, and I was hosed down again. Then it was under the shower, twice, then into a bath thick with disinfectant.

Despite all of this my bed sheets held the odour of mud for months afterward. Dad, the Carpenter and I made clandestine plans to get that (don't use that word in front of the boy) eel, once and for all.

All the planning was for nought.

Two days after my dunking, the drag liner moved in for the bi-annual clean-out of the creek. It scooped out the mud, the bulrushes, and hundreds of eels from the creek. They could be seen falling from the bucket of the drag liner.

By the willow tree, I found a sheepskin, the skull still attached, minus one ear. It is probably coincidence, but I never fished for eels in the creek again. My relationship with my mother took a distinct turn for the better, and a new legend was born.