Boom rigs are ideal for drift fishing in shallow right through to deep water.

It was up in NZ's Bay of Islands one November. I was fishing on 'Striker' with Bruce Smith at the helm. In the late afternoon we were chasing a feed of snapper in 10 metres of water over a weed-covered, fairly flat bottom - and "chasing" is the key word.

We had rigged up with a ball sinker running down to swivel, then two or so metres of trace to the baited hook. Bruce drove the boat around the area and when he spotted a school of fish on the sounder, he manoeuvred upwind, we dropped our rigs to the bottom, and drifted through the school.

Usually one or two of the four of us who were fishing would hook up in the school. Trouble was, the wind was quite strong, and our drift was pretty quick.

We tried going up to bigger weights but this did not cure the problem. If the weight was too heavy our gear snagged on the bottom. Plus the heavy weight made bite detection difficult.

It was then that I remembered some English boom rigs that were hidden away in the bowels of my tackle box. These boom rigs (drawing hereabouts) were designed in England for this style of fishing. 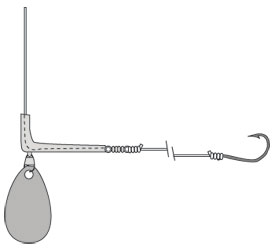 As soon as I felt the sinker hit the bottom I reeled in a couple of turns. Very shortly afterwards I felt the first bite, which turned into a hook-up.

The consistency of my hooking-up on each drift soon had the other fishermen doubting that it was my superior ability to catch fish that was doing the trick, and despite the flak I had copped when I first pulled out the boom rig, they dived into my tackle box.

Once they had rigged up with the boom, their suspicions about my ability proved correct, and it was now a regular occurrence for us all to be hooked up on each drift.

Despite the fact that we moved up to heavier sinkers, bite detection was not much of a problem. The weight is hung off the boom and not the line. The line runs through the boom and touches on the bait are easily felt.

Once the fish is hooked, the main line pulls down out of the slot that runs along the bottom of the 'L' that forms the boom. This means the line is straight to the hook, not at an angle, while fighting the fish.

The sinker can be rigged on a length of line to control how far above the bottom bait will drift. If the sinker is attached with line of less breaking strain to the main line, the sinker will bust off if snagged, before the main line breaks.

Why didn't you jig, some of you may well ask? Well this was one of those occasions when there was little current and a strongish wind - rotten jigging weather. Keeping jigs near vertical was impossible.

The success of this drift fishing method sparked my interest and I started using it on subsequent fishing trips. Besides, there are times when my terminal laziness kicks in and jigging seems like too much hard work.

Drifting over foul ground pushed by the current produced fish. Drifting along drop-offs and reef edges when wind or current direction were kind also produced fish. With careful control of line, hence depth, reefs could be drifted up, over and down, to great effect.

Drifting above schools over a clear sandy bottom I found that having the sinker running along the bottom seemed to increase hook-up rates. Whether that was because the bait needed to be near the bottom, or as some writers suggest, the sand kicked up by sinker is an attractant, I am not sure. But what is sure - bites did increase if the sinker hit the bottom.

Using a boom rig for deep water fishing for hapuku, or any deep-water fish, is ideal.

The weight can be slung a few metres below the boom on lighter line than the main line. If the sinker hooks up on the bottom it is easier to free. Some booms come with a longer tube section that helps stop the hook and trace from tangling around the main line as the bait descends.

When using a boom it seems that whole baits work best. Whole pilchards, yellowtail, piper (garfish) and the like, all work well. Now don't ask for a scientific explanation because I do not have one, but towing baits backward seems to work best.

Rig the whole fish bait by placing the hook deep through the body just in behind the head with the hook point pointing toward the tail. Take a couple of turns around the body with the trace, and then a half hitch around the tail.

(Actually, as a brief detour, I have noticed when using whole fish bait like a piper as a popper when chasing kingfish, that rigging a whole fish bait backwards gets more hits. It may have something to do with the fact that is difficult to rig whole fish baits to swim forwards without the bait spinning.)

If cut baits are the option, try cutting the bait into strips rather than cubes. Long thin strip baits hooked up at one end give the bait a chance to wriggle about as it moves through the water. Movement does seem to trigger more bites.

Boom rigs can also be used as a form of downrigger. Rigging a lure such as a Rapala on a boom rig catches fish, including snapper.

But I have found most success using soft plastic baits off a boom rig.

Drift fishing does not necessarily mean using a boom rig. There are a number of drift sinkers now available. These are variations on a theme of a long tube with a weight at one end and a clip or loop at the other. This is designed to have the heavy end of the tube near or on the bottom, and the tube keeping the baited line off the bottom.

I have used these with some success but find them most useful over a relatively clean bottom of sand or mud. They are ideal for estuary fishing, or drifting along clean channels.

Drift bait fishing is a highly effective way to catch fish in all depths of water. It can be used over schools in water less than 10 metres deep. In water over 20 metres deep it can be more effective than anchored fishing because of the problem of accurately placing a boat in current and/or wind.

Besides, on a nice calm day, what could be a better way to recharge the batteries, than drifting along with bait bouncing near the bottom, occasionally being grabbed by a fish. Boom times.