How To Fish with Metal Jigs To Increase Your Catch Rates

When I opened Just Fishin' over 30 years ago the jigging boom was about to happen here in New Zealand.

The guys that were first into it were reporting phenomenal catches of a wide range of fish.

But amongst non-jiggers, skepticism reigned supreme. How could a metal imitation of a fish, bouncing up and down near the bottom, catch fish? Soon the evidence became too clear to ignore, and the jigging market exploded.

Now, here I will make a guess that is not entirely without the evidence of long observation; 50% or more of the people who bought jigs tried them once or twice, and never used them again.

The reason for the high level of lapsed users is simple - they never caught any fish by jigging. When I have questioned these people, one thing has become very clear, they tended to be the same people who do not catch many fish in any case.

These people bought jigs and jigging rods in the hope that this new gear, this new technology would somehow catch them more, or some, fish. Faint hope!

I contend that where you fish is the most important factor in successfully catching fish.

If a fisherman cannot identify where fish are likely to be holding, it is most likely that this fisherman will catch no fish. This remains true no matter what type of fishing tackle, or bait, they use.

One thing about jig fishing that is certainly true; using jigs where fish are not is a complete waste of time.

At least when bait fishing, there is a chance that fish may be attracted to where you are fishing by the smell of your bait or berley.

Jigging can be a very effective method of catching fish, but like all forms of fishing, using hit and miss methods will give you hit and miss results. In many ways successful jig fishing requires more work in identifying where fish are likely to be, than any other form of fishing. This is why many fishers are unsuccessful at catching fish using jigs.

Identifying likely fish-holding territory in the general area you have chosen to fish, is even more critical when jig fishing than in any other form of fishing. Doing the homework prior to fishing is even more essential.

Once you have identified fish holding territory or seen a school of fish on the sounder, motor up current, to drift back over the fish. Jigging very rarely works from an anchored Boat!

Drop your jig and allow to free-spool to the bottom. Then raise the rod tip to lift the jig about, and lower the rod-tip to allow the jig to free-fall back to the bottom. Be ready to react to a 'hit'. Fish will hit the jig on the drop or lift.

Once you have landed a fish, or drifted over and away from the fish. Motor back up current, and start gain. This basic technique works for most bottom to mid-water feeders

Kingfish require a different technique and speed is all. Drop the jig to the bottom, then wind it up pretty much as fast as you can.

Jig size selection is aided by using a sounder. As a rough general guide select a lure using the following formula. Take your breaking strain of the line you are using in kilos, add a naught, and this is the lure weight in grams. 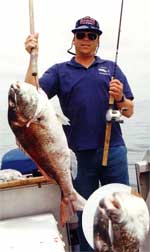 The most important factor in jig weight selection is to use the lightest jig possible to reach the bottom with the line nearly vertical, while the jig retains a 'fluttering' motion as it sinks. The whole idea of a jig is a lure that looks like a crippled or hurt bait fish.

In the chart below I have set out a chart for basic bottom bouncing for snapper and other inshore species. Different weights are used when high speed jigging for kingfish, or deep jigging for hapuku, these will be covered in the chapters devoted to fishing for these species.


It should be noted that lure shape can make a difference. For instance if you are in deep water or in a fast current, instead of tying on a heavier lure, try using a narrower profile jig. These narrower jigs will sink faster, without adding bottom-plummeting weight. In shallower water a wider profile lure, with a more pronounced flutter may do the trick.

Some jigs are made of softer metals that can be bent. Sometimes adding a small bend to the lure will produce just the right flutter to turn on the fish.

It is important to think of jigs as hard bait.

Just as you will change flesh bait to try and tempt fish, changing jig shape, jig weight, and the action you impart to the jig will sometimes make a difference.

One question that often pops up when jigging is discussed is whether to use treble or single hooks.

Here are some pros and cons.

Treble hooks do hook-up more often. They also hook-up on the bottom more too! (As if I cared when I owned the shop, it depended which side of the counter you were on). But many fish are lightly hooked on trebles, and the foul-hooked(when a fish is hooked anywhere on it's body, but outside the mouth), rate is higher.

It can be very difficult to release undersized fish with a good chance of survival that are treble-hooked without terminally damaging the fish. This to me is the biggest persuasion factor against trebles.

Single-hooked jigs tend to have a reduced hook-up rate, but hook set is often more secure. But the single biggest advantage of single hooks is they are much easier to remove when releasing fish.

The final added bonus of using single hooks is that it is much easier to add 'movement' and 'action' enhancers to the jig. Many jig fishers add coloured plastic tubing to the hook to add extra life to the jig. Adding soft plastic lures to a single hook really increases hook-ups, sometimes spectacularly.

(My feelings on multiple hooks, doubles and trebles, is that they should be banned - they are bad news for fish if you have to release them, and they foul-hook too many fish. They are dangerous to anglers too - the first time you get a couple of barbs from a treble hook buried in a part of your person, will convince you to use single hooks only.)


Jigging Is For Fishermen Who Catch Fish

When jigging first exploded onto the New Zealand fishing scene the hype and overblown promise far exceeded the reality for most fishers. Jigging by its very nature is, to use a corporate buzz-word, pro-active fishing.

For the bean counters among you, the returns from jig fishing are directly proportional to the time and effort you put in.

It is a three part activity:

The 80:20 rule is more true in jigging than most other sections of the sport of fishing. It is no accident that the most successful jig fishermen I know were successful bait fishermen before taking up jigging.

Leave The Bait At Home

There is a sure-fire way to improve your jigging knowledge and technique, and that way is to leave your bait at home. Having no alternative is a great way to reduce the learning curve.

From "Fishing Even Smarter"

Most times I guard my spot 'Xs' with more diligence than most, but I am less concerned about revealing the location of some spots than some others. The reason is very simple, most fishermen will not spend the time and trouble anchoring in just the right spot.

Anchoring in this context is a two part activity. Anchoring the boat is the first and critical part, and "anchoring" the bait is the second, and just as critical part. But the second part is entirely dependent on the first.