How To Tie A Booby Fly - And Variants

When tying a Booby fly it is important to look at the fly in profile to judge its appearance. It is equally important to think about what it looks like when wet, (the bottom fly in the photo).

The proportions of the flies in the photo are about right. Maximizing the “wriggle” of the tail is important. They can be tied on a range of hook sizes from around 12 up to 6 or 8.

The key thing to remember is the fly's proportions when wet.

Always tie the eyes on first.
This has two advantages. It allows you to judge the body length and width much more easily, but more importantly it allows the eyes to sit down and around the hook shaft. This gives the lure a much more natural profile.

The usual method is to use polystyrene balls. These can be obtained from plastic suppliers as bean-bag fillers. Take a piece of panty-hose (preferably empty) or clear, pliable and thin plastic about 10 cm square (bank coin bags are good) - not Glad-Wrap or similar as it stretches too much. Place the two balls in the centre and pull the ends in to tightly enclose the balls.

Tie down the collected ends of the plastic or panty hose to the shaft and trim, then bind down the balls by winding in a figure eight pattern between the balls, trim the excess panty hose and then take the thread to the rear of the hook shaft. [For detailed foam ball tying instructions]

There is a better method of forming the eyes.

There are a number of problems associated with using styrene balls.
Firstly they are not durable; one fish and the balls can often be crushed and torn.
Secondly, I have yet to find a head cement or glue that does not dissolve the balls.
Thirdly, panty hose and plastic tear easily and the balls pop out when casting.

If you can obtain some Ethafoam or Plastazote, (same product, different brand names,) grab it. You can also use Jandles (or thongs or flip-flops, depending on where you live). I found some sheets about one inch thick in yellow, white and black. A plug cutter made out of sharpened sections of an old car aerial forms one inch long cylinders of various diameters.

Push a piece of the foam under water and squeeze it, and while still holding it underwater let the foam expand again.
Lift the foam out of the water, and squeeze it again. If water comes out of it, it is not closed cell foam, but open cell foam just like a sponge used in the kitchen or bathroom.

It is very important that the foam used is ‘closed-cell foam’.

That is foam where the ‘bubbles’ in the foam are not connected. If you use open-cell foam (like a sponge) the eyes will soon become waterlogged and sink.

Lay the cylinder of foam across the hook shaft and tie down by figure eight binding. I usually leave it at that but some go the drama of trimming around the ends of the cylinders to form a more rounded shape. I have found no difference in fish catching ability. [For detailed foam plug tying instructions]

Dipping a round bodied toothpick, trimmed to the desired thickness, in black head cement and gently dropping a blob onto the ends of the cylinders forms eyes . If you want to be really clever, dab on wider blob of yellow paint, then dab on the black in the middle.

Or, and better than paint eyes, get some small dolls eyes and glue them on to the ends of the Ethafoam - these hollow eyes also provide extra buoyancy.

See the photo below.

Tie in tail and body (in that order)

A good tip when handling marabou tufts is to wet the thumb and forefinger and roll the end of the marabou between them. This makes it much easier to tie in.

Take a good clump of marabou, and this is one case in fly tying, where more is better than less, and tie onto the shaft. The marabou should be at least a hook length and a half off the bend of the hook.

Tying in the excess marabou along the shaft of the hook will allow you to build an evenly thick body.

Tie in a bit of tail flash. A piece or two of pearlescent flashabou tied on top of the tail adds some extra attraction.

The body is formed with chenille using two methods.

When using standard chenille first tie in tinsel, then chenille. Wind on the chenille to form a body and tie off, and then wind on the tinsel to form the rib. Tie off.

Otherwise use a sparkle chenille and do not tie in a rib.

In both cases it is better that the body is smaller than the diameter of the Booby eyes.

Method one: Tie as above using black or dark olive marabou. Use aurora luminescent skirt, or any material that lights-up under light from a torch, as the body.

Method two: Tie a Booby using black or dark olive marabou as a tail, black, red or olive chenille as a body. Then using luminescent paint dab eyes on the boobies. 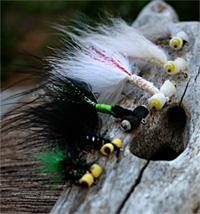 Top is a Rabbit Booby.
Next a Mink Booby.
The third from the top is a Sparkle Booby, good daytime fly and on moonlit nights.
The Viva Variant Booby is good at night and during the day - yes I know the ‘rule’, dark flies for dark and bright flies for light - ‘rules are for the obedience of fools, merely guides for the wise’.
The Little Black Number is good at night and in the day - read the rule above.
The bottom fly, a Blob Booby works well at night and daytime too.

The list of variant ties for boobies could fill quite a few articles.
The more common are as follows.

Viva Booby: Tie a Booby using black marabou tail. Then tie in and wind on two turns of chartreuse (fluorescent green) chenille, completing the body with a dubbing made of black marabou. Use a tuft of black marabou tied in behind the boobies to form a wing. Try this fly in bright sunlight. Yes, I know about dark fly theories, but this pattern works very well during the day.

Cat's Whisker Booby: Use a white marabou tail, lime green chenille, or chartreuse sparkle chenille body, and a tuft of white marabou tied in behind the head as a wing.

Booby Bugger: Tie a Booby as usual to the tail. But before starting tying in the body tie in a barred hackle by the tip at the tail. Form the body of chenille then wind the hackle forward to the head and tie off, in Woolly Bugger fashion.

Rabbit or Mink Booby: Tie a Booby head as usual, then wrap the hook down to the tail with silver or gold tinsel. Tie in a rabbit or mink strip at the tail leaving at least a hook and a half of the strip as a tail, and enough to cover the hook shaft. Wet the fur above the shaft of the hook, then tie down the strip with about 4 or 5 turns of the thread. (Wetting the fur makes it easier to pull the fur apart to tie down through the fur to the skin.) Tie the fur down behind or in front of the Booby eyes according to your preference.

The list of colours available to the Booby tier is just about as wide as all the colours in the spectrum.

Probably the most popular and successful colour combination is a white tail, chartreuse chenille or sparkle chenille body. Darker colours using olive tails work well in coloured water or dusk and dark. But do not get hung up on the dark fly for the dark story, a Viva Booby works much better during the day than at night - maybe trout have not heard the dark fly rule?

All-white Boobies work well too, especially at night if there is a moon lurking around.

OK, time to get something out of the way about fly colours for day and night -
Rule 1: Bish is always right.
Rule 2: If Bish is wrong refer to Rule 1.

Recently I have been using a peach tail and body to great effect. A yellow tail, yellow body and olive wing has caught plenty of fish. But as the photo shows the colour range is endless.

Use a long shank down eye, or straight eye hook. The most common size is probably a size 6 hook but I regularly use size eight and ten hooks. Smaller hooks seem to perform better at night.

One of the first things you notice when using Booby flies is how often fish are very deeply hooked (back of mouth and throat) . If you release fish, it is a wise move to de-barb the hooks. Another tactic to avoid deep hooking is to tie the boobies on the underside of the hook, which makes the hook swim barb up - this seems to result in more lip and upper-mouth hook-ups.