How To Fish For Trout In Riffles - Part 1

The most challenging form of trout fishing?

Fishing riffle water is probably the most challenging form of trout fishing. For a start everything happens in quick time. You make a cast and as soon as the line hits the water, the currents start to move the line, pulling the fly or lure away from where you want it to go.

Secondly, you not only have to control what happens to the line between the rod tip and the fly or lure, but you have to ensure that the fly or lure is going to pass very near the fish or its probable lie in a natural or lifelike manner. Somehow in this moving water you need to control the depth of the fly or lure.

As if this is not enough of a challenge, there is keeping the line from snagging under rocks and boulders to keep your mind and agility alive. 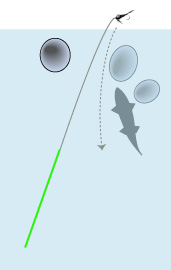 Fishing riffle water most often dictates using an upstream method. That is standing below the fish or its lie, casting across and up ahead of the fish, and allowing a nymph to sink and drift as naturally as possible down to the fish. Same for a dry fly, cast above the fish and drift it down as close as possible to the fish. It is usually best to be to the side to avoid spooking the fish with the splashdown of the thick fly-line.

The key to fishing this way is to eliminate, as much as possible, any drag on the nymphs caused by currents pulling on the line between the rod and the nymph. If the line forms a downstream ‘belly’ below the nymph it begins to pull the end of the line, and your nymph, across the stream or river. This pull lifts the nymphs away from the bottom and speeds up its movement. Nymphs swim or float to the surface, but the current always pushes the nymph downstream. Any sideways movement is unnatural and you are unlikely to get a hit. (More later in this section.)

Use a floating line and as much leader as required to ensure the nymph will reach the required depth. This may be longer than you think, but a rod-length leader covers most options. Even in shallow water the current is a major issue and lengthening the leader may aid getting the nymph to the right depth. There is a trade-off though. Riffles by definition have boulders and rocks: a leader that is too long can wrap around under rocks and boulders, leading to the line snagging.

Casting heavy nymphs, especially Tongariro-heavy nymphs, is definitely hard-hat territory. It is not called ‘chuck and duck’ for nothing.
The major problem casting heavy nymphs is to get line speed up, and then maintain that line speed.
Despite what casting purists say, let the nymph hit the water on the forward false-cast. The water ‘grabs’ the fly and helps to load up the rod more deeply, and this will help to get the line up to speed more quickly and more safely.
It isn't pretty – but it works.

Using weighted nymphs will almost certainly be required, although this is not the only answer. Where legal, lead can be added to the leader to help pull the fly down. Or tie on a weighted nymph and then an unweighted nymph off the bend of the weighted nymph. But, I find that using lead on the leader, or two nymphs, increases the number of times the line snags around boulders. This because more of the leader is running parallel to the bottom, and therefore more prone to drifting under rocks and boulders.

I now almost always use one heavy nymph fished using the ‘High Sticking’ method, [covered in part 2 of this section.]

Get rid of your belly

Of equal importance to using a correctly weighted nymph or nymphs, is line control. That is, controlling the fly-line on the water. The most important thing is to eliminate any ‘belly’ in the line between the rod and the nymph.

‘Belly’ is formed by two factors: 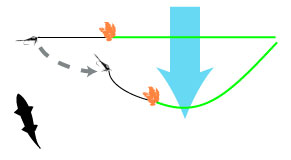 To reduce belly it is usually imperative that the line is ‘mended’ as soon as it hits the water.

Mending line is the term used to describe moving the line into a position that produces the best drift of the fly, and eliminating belly. Many anglers wait too long to mend the line, and leave trying to do so until it is too late.

It is better to mend too early than it is to try and do it too late. 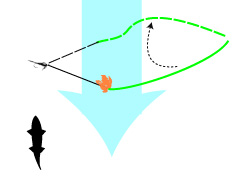 To mend a line; when the line has hit the water, release some slack from the line hand, as you lift the rod tip to around 11 o'clock, where 12 o'clock is straight up, and then holding the line in the line hand, flick the belly of the line upstream. This needs some practice if it is to be achieved without moving the end of the line, and the nymph.

As the line drifts down toward the angler the slack line needs to be pulled in with the line hand, so that another belly does not form. To do this place the line over your index finger of the hand holding the rod. Then use the other hand to retrieve line, as you pause between each pull of the line, hold the line against the rod handle with your index finger.

On longer drifts you may need to mend the line again, and sometimes again and again.

One way of reducing the need to do big mends or multiples of them is to be as close to directly behind the fish as is practicable. Ideal casting positions are at 4 to 5 o'clock, or 7 to 8 o'clock, where directly upstream of the fish is 12 o'clock, depending on what side of the fish you are standing.

More on Mending - this article is the best I have read on line control on the water.

Spin-fishers can use nymphs too. Use a clear, water-filled, plastic bubble-float. This should provide not only an indicator, but also enough weight to achieve the cast. These floats have two lugs with holes on them for tying in the float. The intention is to tie the main line to one lug, and the leader to the other. It is better not to use these. Instead thread the main line through one of the lugs and then tie a stopper-knot on the main line side of the lug and a swivel on the other to tie on the leader. Or, shove a toothpick into the hole with the line to jam the line in place.

The amount of water in the bubble-float should be tested before you cast. You need the float to be just buoyant and no more. This is so the fish will feel little or no resistance when it picks up the nymph. It will also mean that the bubble will duck under the water easily and quickly when the nymph is touched.

Most often when upstream fishing with spinning gear it is best to be just to one side of the fish or its probable lie. If 12 o'clock is directly upstream of the fish the ideal casting position is at 4 or 8 o'clock depending on what side of the fish you are standing. Problems of scaring the fish by dropping a line near it are minimal when using thin mono.

It is virtually impossible to ‘mend’ mono line, so casting from a position too close to opposite to the fish will introduce insurmountable line control problems. Cast well above the fish to allow the nymph time to sink, and to avoid spooking the fish on the float’s splashdown.

Again, because it is virtually impossible to ‘mend’ mono line, control must be achieved by winding in the slack line as the bubble-float drifts toward the angler. This needs careful attention. Line must be retrieved at a rate that does not allow a belly to form anywhere in the line on the water, but not so fast as to pull on the float.

Because the angler is more directly behind the fish there is likely to be little slack in the system, and evidence of a take can be more immediate. By winding in rapidly as the rod tip is lifted a good hook-set can be gained.

Because of all the issues outline above, spin fishing riffles is best done with a long rod - at the very least 2m (6' 6"ft), preferably more. Anything shorter will amplify the problems of line control.

I believe any spinning rod should be at least 8 foot long and 9 feet is not too long. The longer rod gives you much more control over your cast, direction, and distance, so accuracy is very improved. The longer rod will also give you greater control of the line in or on the water.