Fishing Riffles In Rivers Or Streams For Trout - Part 2 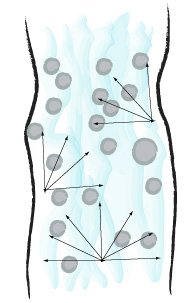 Sometimes it is hard, bordering on impossible, to spot fish in the hurly-burly of riffle water. This is especially true in water less than say, thigh-deep, with many boulders and rocks. This forces the angler to fish ‘blind’. Fishing blind is fishing to as many possible or probable lies as possible, while covering as much water as possible, without actually being sure there is a fish in any one of those potential lies.

Fact is that in many riffles fish may be found in front or behind every boulder and rock - so fishing the clock is the most viable option.

The technique is simply to ‘fish the clock’. If 12 o'clock is directly upstream, and the angler can walk up the middle of the river, cast to the hours of 10, 11, and so on through to 3 o'clock. Take a few paces forward and repeat.

If you are forced to wade up one side of the river or the other, short cast to 12 o'clock then 1, 2 and 3, then back to 12 o’clock and repeat, but this time lengthening the cast. Move a few steps forward and repeat.

Always start casting from the most downstream point first.

Fishing this way covers the water in an efficient way – a method that can place a nymph in front of the biggest numbers of fish.

High-sticking is a very effective technique when fishing riffles. It can be used to fish to visible fish, probable lies or fishing blind. It can be used when fly or spin-fishing.

The basic technique is very simple. Cast a pair or three weighted nymphs, far enough away from the rod tip that when you lift the rod tip to nearly vertical, most of the main-line (if spinning) or fly-line is off the water.

As soon as the line has hit the water after the cast is made, immediately begin to lift the rod tip up in the air and follow the line with the rod tip keeping the line moving at the same rate as the water. The rod can be lifted to full arm’s length if required. As the nymph passes the angler, and moves downstream, start to lower the rod so that line falls onto the water at a rate that still allows the nymph to drift freely.

You can dispense with an indicator using this technique - you should be close enough to a fish that any hit is immediately signaled up the line.

Striking the fish when High-Stick nymphing can be problematic. If the fish hits while you have the rod tip high, it is not possible to strike the fish with the rod. So when fishing with this method, you should fish with your line hand as close to the ‘stripper’ guide, (settle down Bruce! - its the guide nearest the handle), as possible. Then when the fish strikes, you can pull down and back on the line. You can pull back well over a metre of line using this method. Just remember if the weight comes on, or the rod tip gets a decent bend in it, stop pulling, you may break the leader otherwise.

Quick Tip – Dead in the Water

I saw an American use this trick when high-sticking and subsequently I have used it successfully.
If there is a boulder in the water with just a few inches showing above the flow, drop the fly-line so the leader drapes over the boulder leaving about a metre or so of the leader and nymph or dry fly to swing into the pocket behind the boulder – and leave it there. Drives trout nuts.

Cover the water by fishing the clock, then move up the riffle a few paces, leaving the line trailing in the water. Once in position, just throw in a cast, using the pull of the water as a ‘back’ cast and you are back in business. High-sticking is a very effective way of covering a large amount of water very thoroughly. This is high energy-expending fishing.

But be careful. I was fishing a riffle in the Karangahake Gorge between Paeroa and Waihi. I let the line drift out behind me as I took a step or two upstream, and when I was in position I ripped in to a full-blooded cast. Would have been a good cast too I think – if a rock had not reached out and grabbed the nymph as it drifted below me. The rod broke with a perfect imitation of a pistol shot.

[Czech nymphing] is a similar technique for covering riffle water, but the rod tip is held low throughout the drift of the nymph(s). A much shorter length of fly-line out from the rod-tip is used, only a meter or sometimes none of the fly-line. Have look at the link above for a much more detailed explanation.

I Can't See You

One of the reasons for using a High-Sticking or Czech nymphing technique is that it is very difficult to spot fish in this type of water, so you need to cover the water. Well there is a yin for this yang - a trout has a problem seeing you too. You will be amazed at how close you can get to fish in riffles. I have regularly had fish hit less than two metres away. This why Czech Nymphing and Hi-Sticking are so effective - you can place your fly right where it needs to go, under maximum control.

On days when there are plenty of insects on the water, try fishing a big bug-type dry fly – a Madam X, big Elk Hair Caddis, Green or Brown Beetle, or my current passion, foam flies. Cast short as above and allow the fly to drift right through. Don’t worry if the dry fly ‘drowns’ – fish it right on through. Trout will often take drowned dry flies in riffles, because waves and currents pull under many natural bugs. (This one of the big advantages of foam flies, 'drowning' them does not reduce it's ability to float, unlike fur and feather flies. So you do not reduce fishing time by having to add floatant to drowned fur and feather flies.)

Another trick is to use a larger dry fly as above, but run a lightly weighted nymph off the bend of the dry fly hook, just about 10cm (1') below the dry fly.

Trying to fish riffles with a sinking line, or swinging sunken flies and lures downstream and then across and mostly under boulders, rocks and snags is an exercise in total frustration. It can be done, but then so can running through thorn bushes buck-naked. There is just not a great deal of point to it unless pain is your close and intimate friend. Unless you are seriously into losing flies, lures, leaders, and your temper, fish upstream in riffles. But...

Since writing this book I have learned there is a way to fish riffles downstream using a fast sinking leader and weighted flies. Trick is to keep the line length relatively short - 20 to 30 feet, but have 5 or 6 feet of line off the reel. Cast no more than to 2 o'clock if directly down stream is 12 o'clock. Cast shorter than the line length to give the fly time to sink before it reachs the probable lie.

Let the fly swing into the lie, using your rod to help guide it. Swing it out with the rod and let it drift back again. If no action swing the fly back to 2 o'clock and let of 2 or 3 feet of the line you have in your hand and swing the fly back to the lie. I have had a good deal of success with this technique.