Progress was measured in short slow steps along the sand, body and arm movements kept to an absolute minimum. Our Polaroid-screened eyes scanned an arc from the edge of the sand out to 90° across the water.

Then we froze as a shadow moved across the sand and blossomed into a trout. The trout was moving parallel to the shore not two metres from the water's edge. Standing stock-still we watched as the trout darted forward and the surface boiled as it snatched its prey not six metres away from us, along the beach.

The trout turned and meandered away along the beach, back in the direction from where she came. Quickly we moved up to the point where we had seen her turn, and my client cast out the fly and let it sink. We waited, unmoving.

Then we saw the trout on its return journey. My client twitched the fly, and again, and yet again. Still the trout advanced toward us. Now the fly was only four metres from the beach, and the fish swam under the line. The fly was twitched again, and in the literal blink of an eye, the trout turned, raced back to the fly and in a swirling boil took the hook.

The six-weight fly rod - for the sixth time this bright early-December summer morning - bent to its work as the fish bolted for deeper water and cover. The fight was a protracted affair but eventually a 2.5kg (6lb) fish was gently lifted from the water, quickly photographed and sent back on her way. For the sixth time that morning my client shook his head in disbelief.

That morning in early Summer, the first week of December, we were fishing the shore of Lake Taupo (Central North Island New Zealand) not 100 metres from the main highway. My client, an American and die-hard dry-fly fisherman, needed a great deal of persuasion to fish lake waters.

He was particularly reticent having spent the prior week chasing wily browns in the crystal clear rivers and streams of the upper South Island. The idea of stalking and casting to trout in a lake seemed too far-fetched to be real.

Add to this the fact that we were fishing at mid-morning on a very bright sunny day with not a breath of wind ruffling the water.

Was my client now a happy chappy? I would not bet the family fortune against the idea.

The lure of the chase - the hunt - is what attracts many trout fishermen to the sport. Finding a trout hovering in its lie in a clear stream or river, and then casting to it, is the epitome of the angler's art.

Carefully and stealthily the angler moves along the bank, scanning the water for a shape, a shadow or a movement that will betray the presence of a fish, then he moves with infinite care into a casting position. One false move and the fish will bolt. Then the cast, the wait, and sometimes a hook-up.

It is all there - the stuff from eons back - etched deeply into our genes from our hunting forebears.

But confining the hunt and stalk to rivers and streams is to ignore the potential for sight-fishing along lake shores.

In late spring, through summer and into autumn, lake shores can provide the opportunity for truly wonderful fishing that satisfies all the elements of hunting and fishing.

As the sun begins to heat up the margins around lake edges, [smelt], whitebait or cock-a-bullies move into the shallows to feed and spawn. In other lakes, dragonfly and damsel nymphs move up from deeper water and across the shallows. Trout follow the bait in, feeding voraciously.

These trout usually betray their presence - initially at least - by the swirls and boils they make as they feed close to shore. This is the first and easiest part of the hunt, and should be conducted well back from the water and from as high above the water as possible.

Once the general area of activity has been established, it is good practice to pick out some easily identifiable ‘markers’ down at, or in, the water's edge to act as guides once you move into position along the beach. These can be rocks and logs, etc., in the water or on-shore.

Down on the beach stealth is absolutely essential.

Move slowly and carefully keeping arm movements to a minimum. Stay out of the water - any movement in the water by a fisherman will put fish down. Scan the water in an arc starting right at the water's edge - literally - and sweeping out to a right angle from the beach.

You should have your casting length of line held in coils ready to make a cast if fly-fishing, or your lure at the ready if spinning. If a fish is spotted, stand absolutely still, regularly fish will come within a rod-length if you do a good imitation of a statue.

Try and work out the fish's movement pattern, it's patrol course. Most of the fish feeding close inshore follow a fairly regimented pattern of covering the water in their patrolling area.

Once the fish has moved away, cast out and wait. When the fish reappears start twitching the fly or lure back to shore.

If the fish misses the fly leave it in the water. Leave it where it is until the fish turns back and away and try again on its next pass.

There is however a time when this advice can be ignored and another tactic often works. Sometimes an actively feeding fish will be [slashing at a shoal of bait]. Often a cast into the activity will result in a hook-up. But be careful - a fly-line should not hit the water anywhere close to the fish.

I usually use a small fly for smelt or cock-a-bully imitations. Something tied on a size 10 or 12 hook. A couple of these flies are shown in the photo. 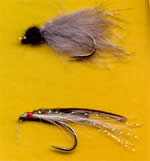 For the smelt fly Bottom fly alongside), run black thread from the eye down the shank to the bend, then back to the eye. Tie in a small clump of white marabou fibres. (Spinning the ends of the marabou between wet thumb and forefinger helps to make tying in easier.) Lay on and tie in a short piece of peacock herl on either side of the marabou. Over the top of the marabou, tie in a couple of strands of Flashabou. Just behind the eye, tie in a tiny piece of red wool to form a ‘throat’. Whip finish heavily to make a pronounced head and varnish. That is it. I call it "Rufazgutz"

For the cock-a-bully (top fly alongside), run black thread from the eye to the bend and back two thirds up the hook. Tie in a small strip of grey rabbit, or a small clump of grey marabou. Tie in two strands of Flashabou. By the tip tie in a big black hackle and wind forward in tight turns to the eye using the whole hackle, tie in, cut off any surplus, and whip finish. Trim the hackle to form a solid ball.

For dragon fly or damsel nymphs I use store-bought imitations, but I buy a range of sizes. This is another case where size of the fly can matter.

Any number of nymphs, fished under an indicator will take fish around the shore. A good trick is to use a leader just long enough to allow the nymph to rest on the bottom. Then lift the fly off the bottom and allow to re-sink.

If you are fishing to a ‘patrolling’ fish, wait till the fish moves off, cast out and let the fly sink to the bottom. When the fish reappears and moves near the fly give it a twitch or two.

If you are using spinning-gear, hanging the fly behind a water-filled float works, as can very small spoons or Veltic-type spinners. But again size does matter - usually smaller is better. Running a baitfish fly ahead or behind a spoon or spinner works too.

Sometimes trout can fool you.

Big Foam Flies, uglier than a Parking Warden's mood but they sure catch trout.

Actually trout can fool you very often, and in my case more often than not!

What seem to be smelting trout are in fact not. On days when the wind is blowing strongly from the shore and there are trees, bushes, or long grass nearby, trout can be feeding on bugs and beasties blown from the trees and lakeside vegetation.

Try some dry flies - bug-type dry flies - often big-bug flies like cicadas, ‘Madam X’ or foam flies. Don't be afraid to give the bug an occasional twitch or two.

Actually trout are pretty good at the old double-bluff. There have been days when the water was covered in bugs - great rafts of them - and trout could be seen under these rafts feeding strongly. But cast after cast produced nothing. Only after tying on a smelt fly could I pull a fish from under that morass of bugs. Beats me!

Sight fishing to lake trout is an exciting and rewarding part of trout fishing but for me it has some other advantages. Firstly this method of fishing works best on hot clear days - no need for really early morning starts. Secondly you do not need to use waders and rarely get wet. What more can you ask! 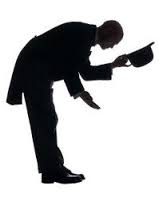