How To Fish For Trout At Night Part 2 - In Lakes

Fishing for trout at night is very rewarding if your aim is to catch consistently bigger fish than seem to be about in daylight.

Many people who fish at night concentrate their efforts around the current that forms where rivers or streams enter a lake (the "rip"). There is a good reason for this. It is much easier than fishing on a river in the black of night.

Fish seem to congregate around stream and river mouths. In the warmer months they come in to feast on baitfish that swarm in the shallows near these mouths. In winter, spawning trout congregate before making their dash up the river.

Most fishermen who fish river and stream mouths make a beeline for the centre of the rip, cast out and retrieve up the rip. Many catch fish using this method, but it is my observation that the fishermen who catch the most, and biggest fish, do not fish in the main rip where the river enters the lake.

In the diagram hereabouts I have attempted to illustrate the dynamics of a typical rip. The diagram is not to scale, but designed to show how most rips develop, and the prime positions to fish. 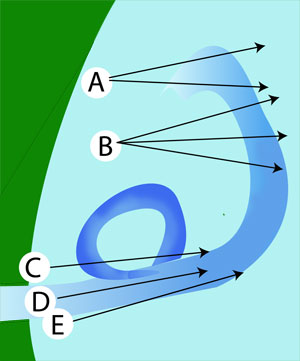 The first point to note about a typical rip is that almost invariably a rip, after flowing into the lake, will bend and travel along the lakeshore.

Sometimes, especially after high onshore winds, the rip may run very close to the shore. In any situation it is the wind direction that determines the direction of the rip once it has entered the lake. The wind will build currents in a lake, and it is these currents that push against the rip and govern its direction.

At some point the rip usually turns back towards the shore and forms an eddy that meets up with the main rip. Where this eddy turns back on the main flow may be only 50 to 100 metres down the shore, but it can be up to and over 500 metres.

Position ‘A’ is the prime spot.
Trout tend to move and feed into the current, so feeding or moving fish make first contact with the rip down-current from the mouth. It is also true that it is at this point that the most feed is concentrated. Current-borne nymphs, insects, and smelt are held in the highest concentrations where the current turns.

Position ‘C’ is the next best prime spot.
This is where the eddy rejoins the main rip, and is again a place where feed is concentrated. This position can be fished either by casting directly out into the current and retrieving straight back up-current, or casting as the dotted line indicates, and allowing the fly to swing across the current, before retrieving up the edge of the current.

Using this cross-current casting angle will be determined by how many people are in the rip. Casting across other lines is not on – very rude words often greet such tactics, along with enquiries as to whether your parents ever got round to getting married. .

Position ‘B’ is good for a ‘fan’ casting strategy.
If 12 o'clock is straight out into the lake, then start casting at 10 o'clock and work round to 3 o'clock. Using this method while walking along the shore can be very productive.

Positions ‘D’ and ‘E’ are right on the edge of the main rip.
If conditions and other anglers allow, cast across the rip, wait till the fly swings out to the current edge, and then begin the retrieve.

But in the black of night, how do you find these spots? Usually you can't, unless you have done some reconnoitering when you can see.

My practice is to wander down the shore in daylight to identify these spots and then make a marker; a scrape in the sand, a couple of sticks, a pile of rocks, etc. that will let me know where to wade when dark rolls in.

Wading In - Deeper is Not Best - Fish Your Feet!

When planning to fish a lake away from the rip at night it is good practise to place some ‘markers’ on shore to help guide casting. You may think you know a piece of shore, but the dark of night can change everything.

Wading in, now there is a subject that can stir things up. Far too many anglers work on the erroneous presumption that the deeper you wade the more fish you will catch.

On many occasions I have watched fish working behind anglers who have waded out to over waist-deep, and out past the fish. I have caught fish behind the line-up of anglers, and despite the clear evidence of fish in the shallows, many persist in freezing their testimonials with no fish to alleviate the pain.

The old trout-fishing adage of fishing your feet first may well have been invented for lake fishing at night. Fish regularly move and feed in water not much deeper than knee-deep. This is especially true if the eddy is sweeping along the shore.

If you are fishing near the ‘lip’ where the river meets the lake, wading too deep could get you dead.

A lip is formed at many river and stream mouths by a build up of sand or mud being pushed out by the river into the lake. In some river mouths, and the Waimarino lip in Lake Taupo is a good (or bad) example, the sand lip can be ten or more metres deep. Just like any sand dune, if you stand near the edge, the sand will run away under your feet. There is nowhere to go but down.

Apart from the danger, standing near the lip-edge is counter-productive. Fish can be holding or feeding right up to the lip-edge and moving out there to cast will only move the fish.