How To Fish For Trout At Night: Part 3 - Where A Stream Enters a Lake

How to fish the rip at night

Having decided where to fish at a rip, the next decision is, of course, how to fish that area. I use two main tactics. 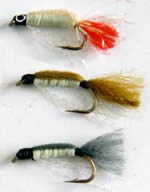 The first set-up is a floating line, at least a three metre leader, to two flies. The first fly something dark on a size six hook, usually made with a big black tuft of marabou as wing, and a fluorescent yellow body and tail – but any dark fly will do. Behind that fly I tie in a size 10 hook – dressed with two or three turns of aurora luminescent skirt or any of the new glow-in-the-dark materials, and a couple or three threads of something bright and shiny as a tuft of a tail.

A size 10 hook? Too small! No. I seem to get more hits, and more secure hook-ups. Mike Stent at Taupo's Fly and Gun shop put me onto these small hooks and it has really made a big difference.

Retrieve this rig at a steady rate, but mix in a few twitches and pulls to add a bit of extra life. If the current is moving the fly-line I will often let the line drift around and occasionally give the fly a twitch or two. It is important to retrieve the fly to the point where just the leader is out from the rod. Fish can hit anytime right up to the rod.

In the dark, how do you know when to stop retrieving before you pull the leader into the guides?
Before you go out, pull the line out through the rod and with 2 metres of line out from the tip, dab two or three bumps of Twink typing corrector, or a glob of knot glue, onto the line down near the reel. In the dark these bumps are easy to pick up as you retrieve.

The second tactic I use is to fish a luminescent [Booby fly], on a fast sinking shooting head. The Booby is tied on a size 10, long-shank hook. The Boobies made from black foam - the body three or so turns of Aurora luminescent skirt - and a black marabou tail with some sparkly stuff. Use less than a one metre leader – I often use just half a metre.

Cast it out, let it settle on the bottom, then give it a couple of pulls – less than half a metre – let it settle again, then repeat.

These two main tactics cover most fishing situations, but when a change is called for, try these.

On flat-calm nights when fish can be heard working but you cannot get a touch using the methods above, tie on a black luminescent Booby, size 10, to a long leader, five metres or more, to a floating line. You can tie a small size 10 luminescent fly off to the bend of the hook if you must.

Before casting out make sure the Booby’s marabou tail is wet with saliva. Cast out, and let the fly settle on the surface, and if you are using a second fly, give this fly time to sink. Then give the line a slow 10 to 20-centimetre pull and let the fly settle again. The hits, when they come using this method, are savage. Be prepared to let out line quickly to avoid a leader break, or a hook pull.

Sometimes fishing right in the rip is the place to be, especially when fish are moving into the rivers or streams. My preference is to use a sink tip line or an intermediate line. A fast sinking line tends to settle on the bottom and reduce lateral movement of the flies. If the rip current is not strong, try a floating line with a long leader, as much leader as you can cast.

Fishing the Lake Shore Away from a Rip

All the tactics that work during the day when fishing the lake's shore can be used at night with a couple of adaptations.

Fishing baitfish imitations on a floating fly-line or using a spinning lure presents few problems. But fishing nymphs in water that does not have significant baitfish populations can produce challenges.

The primary problem is strike indication. It is almost impossible to see a daytime strike indicator at night, unless the moon is bright. I have tried using luminescent indicators and very small chemical lights on the end of the fly-line or attached to a bubble-float. But I have found them more problematical than useful.

It is often difficult to detect when the indicator has ducked under the surface because the light is still visible some way under the surface. Besides, if there is any wave movement, or nymph ‘stalling’ when retrieved through weed, I find myself striking repeatedly but vainly to phantom fish.

There still persists a myth that brown trout will not take luminescent flies – that is flies that glow at night.
It is a myth.
Need convincing? Have a look at the [6.3kilo (14lb) brown trout] on the cover, taken on a little lumo fly. Yep, that is I, looking more surprised than the fish.
In the last 5 years I have taken over 10 brown trout over 4 kilos, at night.
Not one of them has been on anything but a lumo fly.

But despite the above I regularly use a strike indicator at night. In effect I am using it as a float to keep the end of the fly-line as vertical as possible in the water above the nymph. This way, when employing a very slow, pull and stop retrieve, the nymph will rise almost vertically, an action very similar to the pattern of natural nymphs.

Fishing this way I rely entirely on feel to detect a take and I do not know for sure why, but it seems that when fishing at night detecting a take by feel is much easier than during the day. It might have something to do with the fact that at night our senses generally are heightened in the dark or it may have something to do with the notion that without the benefit of sight our concentration is riveted on detecting touch.

A lumo Booby fly fished anywhere on a lake at night is for me the most productive method of fishing a lake at night. Regardless of whether the lake holds baitfish or not I use the same Booby – tied on a size 10 or 12 hook, eyes of black foam, two or three turns of lumo skirt for a body and a tuft of black marabou for a tail.

If you can hear fish working on the surface trying a big dry fly such as a Madam X, or foam fly, can produce great sport. Cast it out, let it sit, and then give it a gentle short pull to get the legs quivering, let it sit and repeat. Sometimes hanging a nymph under the fly a half metre or so can get help to increase hit rates.

Simply casting out a lure, with a few turns of lumo skirt wrapped around the hook shank, and retrieved up the current, will catch fish. This basic technique can be used anywhere around the lake’s shore, not just in or near the rip.

Out to the side of the rip, try a water-filled bubble-float, with a metre or so trace, and a spilt shot or two, to a small lumo fly. Cast out and give the fly plenty of time to sink, then bring the fly home with a slow, twitching retrieve. Again this technique works anywhere around the lake’s shore, not just in the rip.

Try a lumo Booby fly on a half-metre trace behind a heavy lure (without hooks). But check before you cast that the lure is heavy enough to sink to the bottom, without the Booby holding it up. Cast out, let the lure settle, then retrieve by lifting the rod tip to nearly vertical then lowering the tip and reeling in the slack.

Soft-plastic lures fished on small jig heads, or off the hook of a casting lure, can be lethal at night. There are some soft-plastic baits that have luminescence included in the plastic, or jig heads coated with luminescent paint. But if you cannot find them don’t worry, it is likely that the movement of soft-plastic baits sends out ‘eat me’ vibrations through the water. This can attract trout from some distance away.