Amongst all the lies in each water type – riffles, runs or pools – there are lies that have the best combination of food availability and access, good protection from predators and current, and the best environmental conditions. These lies are called ‘prime lies’ and it is these lies that hold the biggest and strongest fish.

Might is right in the water – and big strong trout will soon move smaller trout out. 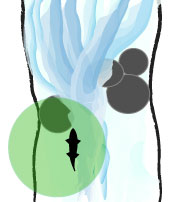 The illustration shows what must be a trout's heaven - a prime, prime lie. The river currents are compressed by rocks, the big rock on the left provides cover from the compressed current and overhead cover is provided by a low tree. Perfect!

If nothing changes in the prime lie, i.e. water level or direction, a prime lie may continue to harbour the biggest trout for many years. As one moves out or is pulled out by an angler, another will soon take its place. (This fact has lead to many mythical stories of the big trout that has occupied the same spot for many years.)

Prime lies are also the lies that hold
trout most often.

Most trout are transient, and when a big trout moves out of a prime lie, smaller trout may move in, for a time at least. If a prime lie is big enough it may hold a number of trout, big and not so big – especially during spawning runs. (Remember that during spawning runs, the shelter aspect of a lie is the prime aspect for trout - they need to rest as they fight their way upstream).

Find a prime lie and it may well produce trout on a continuing basis for years and years – if nothing changes in the lie.

But just as in anything else – change is the only constant. Floods, man, bank growth, bank clearing, silting, and many more factors can regularly change the structure of rivers.

There may be no better illustration of the ability of a river to change than what happened to the Tongariro River, NZ in 1992. In the preceding 10 or so years the river, aided by the control exerted by the Electricity Department through its series of upriver-dams, remained remarkably stable.

Throughout these years anglers were able to go to just about any of the well-known pools and know where the lies were. In fact in some pools it was possible to reasonably accurately predict – down to a metre or two – where a fly would be hit as it drifted along.

During the spawning runs of winter it was not uncommon for some anglers to park themselves in a pool and continue casting like robots, reasonably confident that fish, as they moved upstream, would hold for some time in a lie. Cast often enough and sooner or later a trout would grab a fly.

But in late 1992 things changed dramatically, a series of big floods re-shaped whole sections of the river. Some pools disappeared completely, others were changed, and many new lies were created.

In the following winter many anglers were totally lost. Many continued to cast in vain to lies that were no longer there; washed out, filled in, or moved. Others, too long conditioned to fishing to known lies, could not catch fish.

Fishless days became common-place. Fish were still there, it was just that the 'there' was not where it was.

But the anglers who sought out the new lies caught fish. There is a message here, and I have already delivered it in this book:

If an angler cannot identify where fish are likely to be at any one time, it is likely that angler will not catch fish. Identifying lies, or ‘reading the water’, is the key factor in determining an angler’s success – or failure.

(As I neared completion of the first edition of this book in July 1998, the Taupo region suffered under two major floods – ‘once in a hundred years’ floods. The impact on the Tongariro, Tauranga-Taupo, and Hinemaiaia Rivers was simply mind-boggling. Famous pools disappeared completely. Banks collapsed – corners and bends straightened. In parts it was like looking at a new river, and so we started trying to find lies all over again.)

Sometimes finding where trout are at any one time can be easy. There are three methods that work very consistently:

One of my theories, some call it an obsession, is that it is not what you fish with, but whereyou fish, that is the prime factor in determining fishing success or failure.