No matter how you fish for trout, fly-fishing, spinning, jigging, trolling or harling, this book will help you catch fish more often.

"Here is a piece of information all fishermen need to know - at any one time, trout are found in less than 10% of the water they live in - often in much less than 10%. This is an important piece of info. In any river, stream or lake only 10 percent or less of the all that water will contain trout."

If you want to become one of the 10% of fishermen who catch 90% of the fish you need to know where trout can be found more often, and then how to fish for them, when you find them.

His first fishing book ‘Fishing Smarter’ was first published in 1997, and reprinted every year since (updated and expanded, and re-released as ‘Fishing Even Smarter’). He has appeared on numerous fishing programs on television, and hosted radio programs.
Many of Tony’s articles and stories have a recurrent theme - an exploration of the many factors that determine the difference between success and failure to catch fish.

Tony started fishing as a youngster around Christchurch, then around the mouth of the Waimakariri River, where his family lived for a time. Then trips throughout the South Island followed. In his late teens the family moved to Auckland. Despite working in the hectic world of marketing and sales management and helping to raise three sons, Tony managed to fit in plenty of fishing, both around New Zealand and overseas.

Finally opting out of the ‘corporate lunacy’, for ten years till mid 1996 Tony owned and operated one of New Zealand’s most well known tackle shops, Just Fishin’, in Auckland

“It only seems a short while ago that I was reviewing Tony’s first book, Fishing Smarter. That’s because it was only a short time ago - less than a year in fact. Well, Tony’s been a busy boy since then and this latest offering is proof that he’s becoming one of New Zealand’s most prolific authors. Luckily, he’s also pretty good!

Actually I’m biased. I’ve always enjoyed Tony’s writing and have had the pleasure of editing some of it for the last few years. Quite a bit of the material in this book is familiar to me and will be familiar to regular readers of New Zealand Fisherman Magazine, as it first appeared in these pages. It is mostly worth reading again. The rest is new, and as always with Tony’s stuff its often slightly offbeat or tongue in cheek. As he writes early on, what you won’t find in Fishing Smarter for Trout is dogma.

What you will find are lots of practical hints and tips that will help you find and catch trout, gleaned from Tony’s own experience and wide reading. Its all arranged in easy-to-digest ‘bytes’ and written in no-nonsense prose. The anecdotes are funny but its the practical stuff I really like - the book is packed with it.

Nearly every conceivable aspect of trout fishing is covered in Fishing Smarter for Trout, some of it in depth and some less comprehensively. There’s an emphasis on fishing in the North Island (that’s where Tony chases trout) but most of the techniques translate to South Island fishing as well. The lack of trout fishing ‘mysticism’ and over-use of jargon, often such a feature of ‘trout books’, is refreshing, but most important of all, the book is entertaining and informative.
Try it, I challenge you not to learn something." 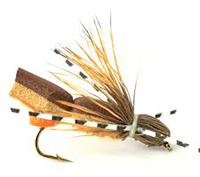