How To Find Trout Lies In Runs Or Glides 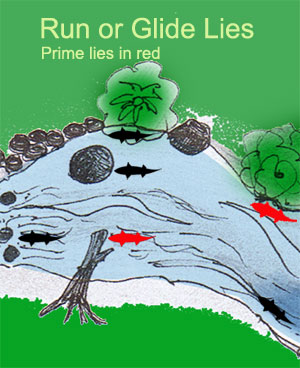 Lies in runs can be more difficult to find than in riffles.

In runs the water is moving less swiftly and because the water surface is calmer than that in riffles it can be hard to spot the areas that will hold fish. Of course spotting underwater rocks, boulders and logs in clear water makes finding lies easier, but only if there is good bank access.

One of the key things to remember about run lies is because the water surface is usually calmer it is easier for trout to be spotted from the air. Despite the fact that we have very few air-borne freshwater fish predators in this country (NZ), our trout's genes carry the fear of air-borne predators.

This water has one other attribute, not only is it easier to spot trout from the air, but the reverse is also true.

The deeper a trout is in the water the wider its cone of vision. Any unusual movement in the air will send them scurrying for cover. This in itself is a key to finding trout lies in runs.

Run lies are usually found near the strongest currents, close to some kind of obstruction, and near some protective cover.

This cover may be deeper water close at hand, rocks, boulders, sunken trees or logs. The stronger currents provide a food source drifting close to the lie. But because the current is not as strong as that in the riffle lies, trout will move further from the lie to pick up food. Any obstruction in a current tends to concentrate that current, hence concentrating the drifting food. This makes feeding easier and more efficient. 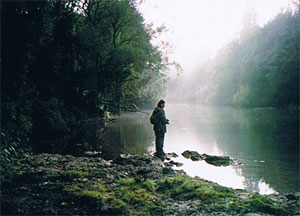 Early morning, a little mist, a great gliding run on the beautiful Ra River, a light spinning rod ready to go - could be heaven - It is.

Runs also provide another source of food. Many nymphs in our rivers hatch in runs. These nymphs are taken as they float or swim towards the surface. The insects as they emerge from their nymph into their insect form are taken on the surface by trout.

But hatches in runs can be happening over a wide area, so a trout could expend a lot of energy hunting down hatching insects. Bigger fish will tend to move down closer to the tail of the pool, where currents and flows are compressed. This concentrates food in a narrower area, and despite the fact that a fish must move about to take prey, the food availability easily overrides the energy used to chase it down.

Land insects (‘terrestrials’) are an important food source in runs.

Wind-blown insects, especially in summer, can form a significant part of a run trout’s diet. It is also one time when trout will move some distance from their lies to eat.

Bugs blown from trees and bushes can splash down any-old-where across the width of a run. But the size of the meal offered by big bugs will overcome the food intake to energy expended rule and allow fish to ‘chase’ after the prey.

If there are no trees or bushes close to the water, but long grasses, in strong winds look for fish feeding on terrestrials hard up against the bank. The same thing applies in heavy rain.

Anywhere that concentrates or merges currents will also concentrate these emerging nymphs and wind-blown insects. An easy method of spotting current concentration in runs is to look for ‘scum lines’. These are lines of scum, leaves and bubbles etc. that form wavy lines as the current concentration pushes this dross together. In fact trout will often betray their presence in runs by ‘rising’ to the surface feeding on insects trapped in the scum.

During spawning runs fish will be found all the way along scum lines. Spawning fish find the area of the river from where they spawned by smell. Areas in a river where currents are concentrated will provide the best source of the strongest smell.

This is partly because the food sources available is wider, and because in the trout’s world might is right. Bigger fish chase out smaller fish, and smaller fish again are eaten. But runs will often hold large numbers of fish of all sizes. 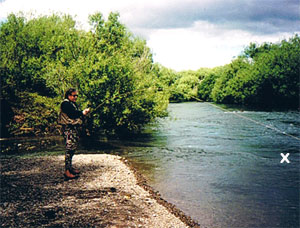 "X" marks the lie where the side-stream meets the main flow, and where the trout I was hooked-up on took the nymph.

In many rivers and streams, in runs, (also riffles and some pools), there are areas where two flows of water meet. These may be where the main flow is separated by an island, a mud, or shingle bank, or on wide ‘ribbon’ rivers where ribbons of water converge.

It can also be where another stream joins the main river.

These join lies can be prime fish holding points. The merging currents push floating food into a concentrated feed lane along the conjunction of the two currents. I would be trying to find these lies if I was targeting big fish.

Sometimes, during periods of low water levels, one or other of separate water flows can slow to almost a trickle. These should not be ignored. This offshoot water can be a fertile breeding-ground for nymphs, snails, worms, mosquitoes – in fact a trout smorgasbord.

Side channels, offshoots, backwaters can be found off riffles too.

Several years ago in mid-summer I rafted down the upper Tongariro. Our aim was to fish using the dry fly, but there was very little action in the main river, so we decided to explore some of the side water. Ribbons of slow-moving water ran parallel to the main river, but often some metres away.

In the first ribbon we explored we found five fish, slowly finning in the weak current, but regularly rising to pick off flies on the surface. We could not see what they were eating as the sun was nearly right in front of us so fly choice was a toss-up. So I tossed-up a small Elk-hair Caddis, and the hindmost fish picked it up and took off down to the tail of the run – bless it.

I was able to play, land, and release this fish without disturbing the others. When I finished, my companion, threw a fly ahead of the four remaining trout and one of them grabbed the fly, and the fight was a repeat of the first.

My turn again, so I tossed another dry fly upstream, and a third trout grabbed it. This trout had none of the genteel manners of the first two. Not only did it rush up to the head of the run, but also it jumped and skittered all over the place. This put fright and flight into the remaining two trout, and to top it all the trout actually jumped off the hook - no Bishop’s blessing for that fish!

We spent the rest of the trip fishing the offshoot water and backwaters and had a great time. Ignoring these offshoots and backwaters is to ignore the potential to find not only fish, but often big fish. As long as there is some current moving through, and as long as the trout has plenty of cover provided by overhanging trees, or plenty of logs, rocks, or boulders in the water, there will often be trout.

Where a riffle enters or exits a run or pool is another prime area to find trout.

Often at the tail of runs, the river or stream narrows before it drops into another riffle or a pool. This narrowing of the current again concentrates food and trout will often be found here, especially during hatches, or in the evening or night. 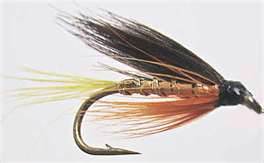