There appear to be three main reasons why trout can be tempted to bite something:

No prizes for coming up with this reason. If the item looks like the type of food the trout is eating, and it is presented in a similar way to the way the natural food is presented, it will likely get bitten. In some circumstances what looks like food can be a fairly broad definition.

For instance, in strong currents a trout has to make a quick decision about what is food and what is not, as that item whips past in the current. In these circumstances it may well be that a close [approximation of imitation or representation] may well suffice to fool the fish. In slower moving or still water, a closer imitation may be required.

Some flies and lures rely on their ‘action’ to represent food. If the artificial looks vaguely like food and moves like food, it may get hit. One of the main reasons for using fur and feather to construct flies is the lifelike movement these can impart.

Some lures such as soft-plastic baits rely on their action almost exclusively.

I used the word ‘bite’ in the headline instead of ‘eat’ for a reason.

Good lies, and prime lies in particular, are guarded with some vigour. Trout will actively chase intruders from their territory. I have observed trout moving some distance from a lie to slash at a spinning lure that bears little resemblance to fish found in the waters around the trout. Big gaudy fly creations that would not look out of place draped around a ballroom dancer get savaged, I believe, primarily for territorial reasons.

At other times, trout can be observed slashing at anything bright in the water, fly or lure. This is especially true during spawning. Whether this is because the bright colours mimic the bright spawning colours of trout, and trout will fight for the best piece of riverbed to spawn or females to spawn with, I do not know. But the behaviour is too regular an occurrence to ignore.

There are some in the fishing fraternity who believe a trout can be induced or annoyed into striking at a fly or lure. Theory is that if you drift or swing a fly or lure past a fish often enough it will bite it either through some notion of annoyance, or because the fish will believe the lure is part of a hatch.

But the so-called ‘induced hatch’ probably has merit.

The theory has it that if you drift or swing a fly or lure past a fish often enough the fish will be induced or persuaded into believing that there is a hatch or new food source that can be exploited.

I think I have witnessed this. Once, some 15 years ago while fishing the Mataura River in Southland, I was casting to a good brown that was feeding on an infrequent basis on some fly or other on the surface. That day I only carried nymphs in my fly box, having forgotten the dry fly box. But I did have lurking in the back of the nymph box a big Madam X dry fly.

Now, I knew that the flies the fish was feeding on bore absolutely no similarity to the Madam X. But I had no option, so out it went, to be totally ignored. I persisted, and persistence paid off. On the sixth or eighth cast the brown rose to the fly and grabbed it. I wish I could report that I caught the fish, but I did not. My mind had wandered, taking my concentration with it, and I missed my opportunity. But the opportunity to learn a lesson was not missed.

Subsequent to this I have observed apparent induced bites on numerous occasions. But I need to add that more often repeatedly drifting or swinging a fly past a fish will induce only a dash for cover.

But there is another but, if you do not drift or swing the fly you do have about your person even if it does not match the hatch, you at least have a chance to hook the fish. If you don’t toss out a fly, you have no chance!

Fly or Lure Size Is Important

As I wrote earlier, sometimes when a trout is feeding on a particular prey it will be difficult to persuade it to eat anything else. This can be very frustrating when you are all but absolutely positive you know what it is eating, and you are presenting the fish with something that imitates it, but you cannot get a hit.

Changing the size of your fly, nymph or lure rather than the lure to something else altogether, may persuade the fish to bite. Very often trout will bite only a fly or lure that not only looks like the natural prey it is feeding, but is of similar size.

As a brief aside there is an old fly-fishing saying that goes: the answer to the question, “is this fly too big” is always “yes”. But like so much about fishing it is not necessarily so.

This principle works in other ways too. For instance, if the trout was feeding on one type of nymph and you had no flies of that type in your fly box, changing to a fly of similar colour and most importantly, size, can incite the fish to bite.

As a matter of course when I am buying or tying flies and lures, I buy or tie each pattern or style in a range of sizes. I have a friend that only fishes with two types of nymph, ‘Hare & Copper’ and ‘Gold Ribbed Hare’s Ear’, but he has them in a range of sizes, weights and some with gold beads. 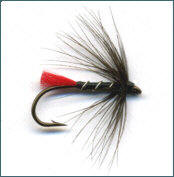