Weed beds are a veritable hothouse for trout food production.

The numbers of little beasties that lurk in and around weed beds make for a trout’s smorgasbord. Snails, nymphs, crustaceans, worms, eels, baitfish, you name it. But fishing in and around this morass of hook-tangling green or brown stuff can drive anglers nuts. 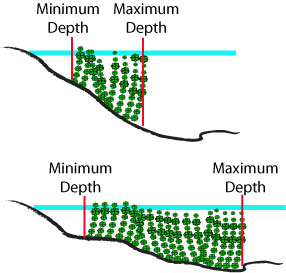 Most weed beds that reach near to or to the surface have strict depth criteria for growth. This usually revolves around the maximum and minimum depth that meets their needs.

Crustaceans, Snails, Worms & Nymphs, are most often found in the shallower regions of the lake.

In fact when looking at a weed bed you will notice how the deep water edge of the weed bed is very clear and precise, and how it follows the basic contours of the lake shore, and the depth at the outer edge of the bed.

But not just tiny beasties live in the weed, baitfish are often found there or there-about. Some feed on the weed itself, others feed on plankton. Others like cock-a-bullies use the weed for cover and to feed.

The reasons weed is such a good environment for growing the creatures that live in it are many:

A key piece of information when trying to learn about where the creatures of the weeds congregate is to look at how many beds are constructed. For most weed beds there is, as discussed earlier, a maximum depth at which the variety of weed will grow, and a shallow limit. These edges are important. 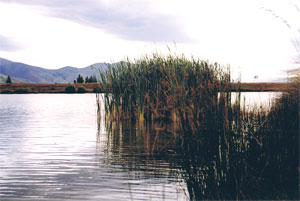 The Bullrushes are a giveaway that the water is shallow around this lake edge, and most likely there is weed below the surface.

The creatures that live on the weed mainly eat the weed itself, or freshwater plankton that drifts onto the weed. Some of course eat other creatures.

Bingo! A flash of enlightenment! Of course that would be along the edges of the weed – the plants living on the edge get more light there - their roots are less subject to competition. 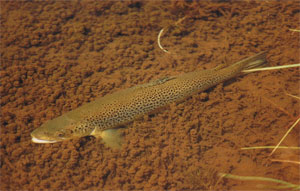 There she is, cruising along in the shallows close to the Bulrushes near the bank. Time to move with great caution, and remember Rule 1.

Along the edge is where most of the plankton is concentrated. But this extra food comes at a cost – trout have worked out that cruising along the edge of the weed beds is a great way to pick off food. Trout cruise along the weed bed picking off morsels as they go.

And while we are on the edge of weed beds, remember Rule 1: Fish your feet first.

Trout will cruise both edges of the weed, shallow and deep. Always approach the bank cautiously scanning the water between the bank and the weed. As long as the water is around adult mid-calf deep or more trout will move through it.

Many of the nymphs that crawl ashore are relatively big, like Dragonfly and Damselfly larvae, and trout love them. Trout cruise the shallow water on a regular ‘beat’, almost down to the minute. So careful observation can tell you when you can get your lure out ready to move it shoreward as the fish approaches – hunting and fishing!

Another thing to be aware of is that the time of the year can affect the density of the weed beds, over winter and often well into spring and early summer, the beds will thin out, sometimes drastically.

At these times trout can be seen moving in amongst the weed to feed. Once again remember Rule 1 – if a trout can see to move around in the weed you can be reasonably sure has the ability to see you.

There are of course weed beds that do not reach the surface, and these beds can also hold huge numbers of nymphs. It is a magic moment on a still day when you notice a dense hatch of insects coming off the water above a wed bed like a small cloud, closely followed by birds and trout getting into the action.

How can you tell where there is a weed bed that does not reach to the surface? Look for a patch of water that is darker than the surrounding water.

While abundance is in itself a defence for the huge numbers of creatures living in the weed, it also means that predators, such as trout can plunder that resource without making a major impact on the lifecycle of the rest of the weed dwelling community.

Contrary to many anglers’ moans and groans, weed beds can and should be the fisherman’s friend. The trick is to know how and where to fish amongst the weed to minimise hooking up on weed all day.

Another key to fishing weed beds is to remember that fish feeding here are usually on patrol – moving through a piece of territory picking off goodies as they move, in a fairly predictable pattern, as much as any pattern by trout is predictable.