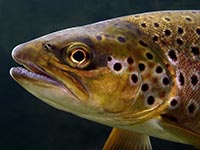 When does chasing big brown trout become an obsession?

I try to get down to the Taupo region on the central North Island of New Zealand in February or March. As autumn starts to bite here, brown trout move into the rivers and streams flowing into Lake Taupo to head upstream to spawn. This upstream movement is usually a reasonably sedate meander, not like the mad dash of pods of rainbows that tend to move up somewhat later.

Usually rivers and streams in February and March are low and clear, but this does not seem to deter brown trout. Mostly they move at night, spending the day hugging the bottom of the deeper water or tucked in under overhanging, undercut banks. Some hold deep in the branches of fallen trees - untouchable.

That year things were different.

A vicious drought was affecting the North Island and beyond, turning the land from the famed New Zealand green to a drab, lifeless brown. Driving down from Auckland I had never seen the countryside so devoid of grass. The sun was literally sucking the life out of the land and waterways.

When I reached the Tauranga-Taupo River (TT), I could see the effect of the drought. The river was now a creek, very low and clear. Despite this, Steve Yerex, a mate, guide and operator of the Keruru Lodge, where I regularly stay, was reasonably upbeat.

Browns were in the river in some numbers he reported over the phone. He suggested however that it might take some high level of skill and more than a big helping of luck to pry one or two out of the TT. He added that I had too little of the first, but to hope for heaps of the second. Cheeky.

Steve was going to be away for a couple of days raft fishing down the Mohaka River, leaving me on my own at the lodge - I liked that. This time of year I was likely to be on the river on my own, too - liked that even more.

Arriving late afternoon, I decided to wander a little way downstream with my Tenkara rod and see if I could annoy a few small rainbows that by now were moving downstream to the lake. Over the next hour and a bit, more than a score of small fish around 6 to 10 inches were plucked from the shallow runs. Great fun.

Next morning and now in serious fish-hunting mode I headed slowly upstream, peering intently into every pool and undercut bank.

The Browns were there. Some brutes among them too. Serious brutes. Brutes that have tempted and tormented me for too many years to recall.

Invariably these flies swept past, untouched. Occasionally a snag fish would sneak up on the fly and fasten it to a rock or piece of sunken timber. Demoralizing, if not for the fact that it echoed all the previous years. There is a toll to pay to chase these fish. 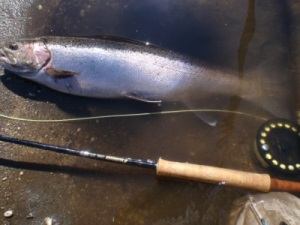 The river here flows down into a half Olympic sized swimming pool butting up to a cliff, then turning at ninety degrees, narrows and flows on down the river.

Big browns lie in the big pool, deep in the dark water, glimpsed only rarely. But around the bend, lie more browns, 10 - 12 of them. Big, some over 10 pound. Some bigger again. Just lying there on strips of white sand, unmoving, in plain sight. Possibly, if not probably, waiting for rain and increased depth to move on upriver to the spawning beds.

Big trouble is, the change of direction and compression of the flow introduces big back eddies and swirling unfathomable variable currents. Getting any sort of drag-free drift - impossible.

These browns seem to have some sixth sense about where the boundary of clear and present danger lies.

They can see you from some distance and remain unmoving, but take one step too close and they calmly slide over into the deeper, darker water up to and under the cliff. Move back beyond the danger boundary, and they glide out onto the sand again. Frustrating if not experienced before.

So the strategy is pretty simple really. One, creep up on the round-the-bend fish from downstream, toss the selected fish-seducing implement above them, and if they don't bite it or slink away as it drifts past, try again. But the second try will usually be the last - for now.

Strategy two: use downstream techniques from the top of the bend, till a fish bites or more likely they head off for a cup of tea and a lie-down under the cliff.

Trying to drift a fly of any sort down close to the cliff is simply impossible. The eddies and currents quickly pull the fly into the back eddies away from the cliff.

You try a few casts of course but soon surrender to good sense and preserving mental health.

So make your casts, watch the fish glide away, and then move up to the big pool for a session of blind casting with all the forms of flies at your disposal. Try to be happy with three or so, 3 to 4 pound rainbows that do bite and stick and be surprised that they are fat and silver and moving up to spawn too - in March? Very early. Well it was early a few years ago, but not so much these days.

After 15 minutes or so check on the round-the-bend fish and if back on station, repeat strategy one and two until the next tea break.

I did connect with one of the bigger fish that jumped on a streamer fished upstream and pulled past the white sand fish - but it came unstuck in very short order.

This game was played for an hour or so, till the trout became impossibly skittish, so I moved on upstream to give both pools a decent 'rest'.

About two hours later I returned from my upstream wanderings, and there were the round-the-bend-fish, lying on the white sand. Back to business as usual.

I was running out of time to get back to the lodge before dark, so I tried something, for me anyway, completely new. I pulled out from a fly-box lurking unloved in the bottom of my backpack, a bass popping-bug with great long legs, a marabou tail, and a cup-faced foam head.

A thoroughly dreadful device I thought to be useless given we have no freshwater bass here in New Zealand. I cannot remember how the horror got into my gear, but there it was, and now it was tied onto my leader.

Sneaking low and slow I got down below the fish and fired a cast upstream and slightly across so the bug hit high up the cliff, and plopped down onto the water. Leaving it to sit and drift for a few seconds, I then commenced a staccato retrieve, twitching the legs and popping water out front.

One of the bigger fish started to rise slowly, stall, and then dropping down a gear or two, raced up under the fly. Its jaws opened, engulfing the fly.

This time at least I blurted out the obligatory "bloody hell it's a fish," before setting the hook.

The brown, as is typical for these fish in this area, dogged down deep and long, swimming up to the top of the bend and then into the main pool. There was a 5 minute or so give and take battle up, down, and across the pool till the hook simply pulled out. I vented with a string of golly, gosh, damns and worse, wound in the line and prepared for the walk back to the lodge.

I am not sure for how many years I have tried to pull a big brown out of that water. Most anglers do not even bother to try.

The next day was pretty much the same as the yesterday. A few rainbows came and went back. I hooked two big fish of indeterminate genus in the big pool but failed to land them. The bass bug failed to gain any interest or action from any fish. So another trip, another meeting with my nemesis.

Yes, I will be back next year.

Why? Because it is so hard to pull fish to a fly there and then try and land it. I have not failed to hook up to big browns there, but landing them, not yet.

A few years ago I landed a wonderful 14 pound wild brown trout from a Taupo river-mouth. It graces the cover of my 'Fishing Smarter for Trout' book.

I yearn to feel the rush that a fish of that size and condition brings, but I am becoming more and more aware I am running out of time. Yes, I will be back next year!