Sometimes apparently disparate things come together to solve an issue that affects each thing.

I was watching some new fishing videos, when something struck me. Fish were taking to the air but none of the anglers ‘bowed’ to the fish. A good number of these aerobatic fish, splashed back down and departed the scene without the hindrance of attachment to hook and line. Why?

The rods in use in the videos, and by me, featured the latest fast-action models from big and biggish rod-makers.

Then there was the fourth thing:

What is this ‘bowing to the fish‘ thing anyway?

When I was first introduced to fly-fishing around 60 years ago, in the South Island of New Zealand, it was on a cane rod. The rod was, by today’s standards, very slow-action, and its lock-up point (the point where the rod can be bent no further without breaking) was reached sooner than modern rods.

This lock-up point is important to both old and new rods. The closer the rod bends towards lock-up the less ’cushioning‘ the rod provides to protect the rod or the leader from breaking, and/or pulling the hook.

One of the common and critical actions a trout can take to break a leader, or pull a hook, is to take to the air. It is when the fish splashes down that damage is usually done. By the time the trout hits the surface the line is usually tight to the rod.

Tight enough that if the fish lands on the line it can pop the leader or pull the hook out of its mouth. Also as the fish falls back toward the water gravity adds more weight, and couple that with rapid twists and turns and you are looking at a smashed leader, or pulled hooks.

So when I was young I was taught to ‘bow’ to the fish when it jumped - that is bend forward at the waist and lower the rod tip to waist height. This introduced some slack line to reduce the chances of line or rod breakage, or hook pulling. Once the fish was back in the water the rod tip was raised back to about 45° to the water surface and battle recommenced.

Over the years as I progressed through fibre-glass and graphite rods, for reasons that I cannot fathom, I slowly stopped bowing to fish. It seemed this was happening to fishermen around me. Maybe just went out of fashion.

While bowing was disappearing, rod actions got ‘faster’ and ‘faster’. 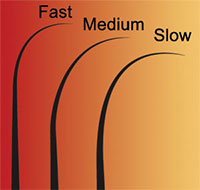 What is strange about the decline in bowing, and the concurrent growth in fast action rods, is the notion that bowing to a jumping fish when using a fast action rod should have become more important, not decline.

Under the load of a pulling fish the distance a rod tip will move towards lock-up is much shorter in a fast action rod, compared to a medium or slow rod. When a line is tight to a fish the pressure the rod exerts on the line increases towards breaking the tippet or pulling the hook out of the trout’s mouth.

Today’s fast action rods are so much faster than the 'fast’ action rods of only ten or so years ago. The risk of losing fish to tippet breakages and hook pull-outs has increased almost exponentially.

As the fish jumps away from the angler its speed and force increases pulling more bend in the rod. Out of the water the fish’s weight doubles. These two factors suddenly add a lot of extra 'weight' on the rod, tippet and hook.

So why don’t we bow to the fish when it jumps in any direction that is away from the angler?

I really don’t know, but what I do know is that I have gone back to my fishing roots and once again always bow to the fish when it gets airborne.

I drop the rod tip to down near water level as the fish rises and raise it again to about 45° above horizontal to the water, when the fish splashes down.

In my recent experience, bowing to a fish has dramatically cut my losses when a fish jumps. Fast action rods almost demand it.