To a South Island of New Zealand trained brown-trout fisherman, the answer to the question, what fly should I use to tempt a brown trout, was easy – a small brown nymph. If that did not work, toss out a smaller, darker nymph.

Our first days’ fishing was on the Nuir River, in the South West of Ireland, near Clonmell. But when we arrived at the river, Eddie and I were really disappointed to see the river was well up, the water chocolate-brown. Dark chocolate.

Jason, our gillie, was not at all perturbed and said we would still catch fish by using streamers, and when he showed us the lure he recommended we use I began to wonder if he retained any notion of sanity. The lures were big and bright, flashing in all directions, and around two to three inches long.

Now we knew that the wild brown trout in the Nuir were by NZ standards small, averaging 10 to 12 inches long, with an occasional 14 to 16 inch fish. So our doubts about the size of the flashy flies grew even more – but Jason, the Gillie, remained steadfast in his recommendation. 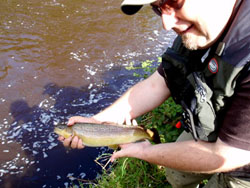 Pretty little brown trout from a very
brown river, on a very big and bright fly.

So we rigged up, and wandered down the river, and started fishing. We caught fish, plenty of fish. Beautifully marked and coloured brown trout that Ireland is famous for. Trout that fought like little demons, deep down in that dark-brown water. So what looked like when we arrived to be a dead day, turned into a most enjoyable session.

The next day Eddie and I fished the Nuir again, which miraculously and overnight, had returned to its clear normal level self, albeit still with some tannin colouration. We used some small nymphs recommended by the Lodge where we were staying, small and very bright sparkling nymphs, and we caught a couple of fish. Much harder work in the clear water though.

On my return to New Zealand I have noticed that bright, and I mean really bright, nymphs are getting the marketing and sales people very excited. Normally that would have my BS antenna rotating at high speed, but some good fishermen are behind the development of these gaudy monsters.

As for me, it would take a lot of convincing that a brown trout sitting quietly munching on little brown somethings, in water clearer than crystal, would not be scared witless by one of these bright flies, drifting down towards it. But in tumbling water with heaps of bubble and strife I guess I would give them a drift or two. Some dirt in the water might persuade me to give them a flick too.

All pimped up and
ready to boogie

As for rainbows, well, we all know they are suckers for a bit of flash, and these bright young things have proved successful for me in rainbow water.

Despite all the above I am sure that if faced with a really big South island brown in gin clear water, a “just one cast” situation, I would be tying something dark brown and small on my leader. But then that may be because I am getting old and gray, and resistance to change is becoming stronger every day, especially to new things. Especially flashy new things. But then again I have caught a hell of a lot of brown trout on little brown flies and still do. Yes, change will come hard. 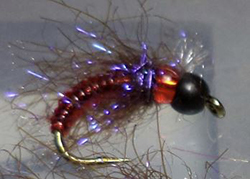