Nymphing the Rip? Fishing Where Streams Enter a Lake

My Dad used to say that if you do not learn something new every day, you should pinch yourself because you could be dead.

I reckon this adage has got to be very true in the field of trout fishing. If ever you think you have got it sussed, trout soon show you how wrong you are.

In my case I am constantly made aware of the vast extent of my fishing ignorance. Often a couple of minutes fishing with good fishermen, guides, or just another angler on the bank will take a mere a couple of minutes to show me something new that has eluded me for over fifty years. 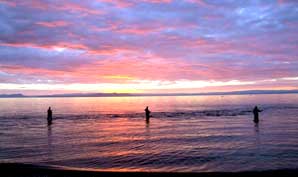 The rip can be seen in the photo above as the ruffled water running from left to right out into Lake Taupo. The beach is behind the anglers, and is below the base of the photo, as is the mouth of the river.

A case in point.

I was fishing the Hatepe 'rip' (the current formed where a river or stream enters a lake) down at Lake Taupo, (central North Island, New Zealand), as the sun began its last hour’s rush towards the horizon. I was in the company of three other anglers.

I fished the left-hand side of the rip using a Booby fly off a fast-sinking shooting head. Two blokes were in the middle of the rip fishing sinking lines to traditional type flies, Rabbits and Red Setters.

But it was the bloke fishing the right hand side of the rip that caught my interest. He was using a small nymph and a Glo-Bug (roe imitation) on a 3-metre trace, fished below an indicator, with a floating line.

My first thought – patronising old fart that I can be – was that he was a duffer who did not know what he was doing.

He would roll cast out his nymphs, only 5 or six metres in front of him, 'puddling' his line in a series of curves between him and the indicator. Then as the slight current out there at the side of the rip picked up his line he regularly flicked more line into the water in front of him.

The indicator revealed the slow progress of the Glo-Bugs as they meandered out in the swirling current. Once all the fly line was out in the current he maneuvered his line to the very edge of the rip and very slowly twitched the line back towards him.

For about a half-hour all four of us engaged in the usual rip ritual of casting and retrieving, each silently saying to ourselves that the fish would come on as dusk descended. For my part I was very confident that if my Booby was not getting hit then the fish were not about – such is my faith in the fly.

I was idly watching the indicator of the man on the right as it drifted away, when I saw it dip below the surface. The angler immediately – and this is important – swung the rod tip in an arc across and just above the surface of the water, at the same time using his line hand to pull on the line.

The fish boiled on the surface and then raced off across the bottom away from the rip. Once the angler got the loose coils of line on the reel he began the walk back to the beach where he landed a lovely six-pound hen.

The two in the middle of the rip declared this feat to be ‘beginners luck’, but I was by now less sure that was the case. My doubt was reinforced over the next hour.

This fish signaled the pre-dark activity and over the hour I caught a couple of fish, the guys in the middle of the rip caught one between them, and the ‘duffer’ on the right caught another two.

"There’s a lesson in here somewhere methinks," I thought as I wandered back towards the cottage heading for a bite to eat before I made another foray later that night.

Around 9.30pm I wandered back down to the rip. A three-quarter moon mostly screened by a thin cloud cover made it dark enough to fish but not too dark to see what was going on around me.

As I wandered down the road to the river mouth the nymph fisherman joined me. He was still rigged up with a floating line and an indicator. But he had changed flies. Now he had on at the top a size twelve gold-bead nymph with a couple of turns of luminescent material as a body and a little tuft of black marabou as a tail. Below this was a size twelve hook, no bead, two turns of lumo as a body and again a tuft of black marabou as a tail.

I had on a black-eyed Booby, size ten hook with a couple of turns of lumo as a body and a small tuft of black marabou as a tail. At night I would normally back this fly against all others. It was going to be interesting to see what happened.

We were the only two out that night – me to the left of the rip – fishing the current edge, he to the right of the rip fishing just off the edge of the current.

This time the nymph angler changed tactics. Instead of the short cast followed by the outward drift he cast way out – and I mean way out. For a ‘duffer’ he cast a mean line -  he must have been giving close to the whole fly line an airing.

He gave the nymphs a good time to sink and then began a very slow two or three-inch twitching retrieve. Every now and then he would pause the retrieve to give the nymphs time to re-sink. I noticed that this time he maintained a tight line to the nymphs.

Over the next hour and a half or so hours we each caught and released four fish, and driven away by the mid-winter June cold we both walked and talked out together.

Seemed the nymph fishermen had not seen his technique used somewhere else, it was just something he decided to give a go. He reasoned that if during the day Glo-Bugs were used in rivers and successfully caught fish surely they would work in the ‘extension’ of the river as it flowed into the lake. His logic on the evidence of earlier in the day was hard to beat.

But night fishing, that was a different thing entirely.

Both of us had used small luminescent flies when fishing at night, regardless of the line we were using. Mostly we had used floating lines off the main rip, with something dark to sink the leader, and small (ten or twelve) fly made of just a few turns of lumo as a body. I had taken this small fly theme and used it on the black Booby described earlier.

He had taken his daytime Glo-Bug theme and adapted it to night fishing.

Both of us agreed that in essence, at night our techniques achieved much the same thing. The slow twitching retrieve of the Booby caused the fly to sink to the bottom, and then bob up. His twitching retrieve using the wool-yarn indicator as a 'float' caused his flies to dart up during the pull, and fall back down during the pause.

Because he could not see the indicator at night he fished with a tight line as the hook needed to be set by touch not sight.

It is the daytime technique that intrigues me most. But with the caveat that unless the hook set is done properly it is hard to get fish to stick. Because the line is drifting away from you, and you must put slack in the system to achieve a good drift of the Glo-Bugs, there is a lot of slack in the system when it come to set the hook.

This is why it is so important to set the hook by sweeping the rod in an arc with the rod tip close to the water.

(Actually, I use the 'sweep the rod tip across the surface of the water' method to set the hook almost exclusively in rivers and lakes, it is the most successful method I know.)

I believe this nymph in the rip technique has a lot to offer, and I will be giving it a solid testing over the coming months.

I can now report that since I wrote the original story, I have 'nymphed the rip' on many occasions, and each time with success. But there are a couple of caveats:

The hits on the lift are quite easy to pick up, but hits on the drop are virtually impossible to feel - you really need to concentrate very hard on the indicator.

How to find
trout in lakes

Trying to fish a lake as a whole, unless the lake was very small, would be a bit like trying to shoot an elephant with an air-gun. You could get lucky, very, but chances are your efforts will not amount to much.

Breaking the lake down into manageable bits will increase your chances of catching fish – and increase your knowledge on an incremental basis.

You might think that after 60 years flicking a fly-rod I would be able to cast properly - unfortunately it is not so.

Sure, despite the fact that I was self-taught, I can get my fly out somewhere near where I want it most times, but too often when I really need to get it to where it needs to land I duff it up and watch the fish I was aiming to catch dart off to where-ever fish go when spooked.

I can most times get enough distance, but when the situation calls for an extra 3 or 4 metres I can almost guarantee the line wraps around my head, or collapses in a series of rings in front of me.

Time to call in the cast doctor, and correct my casting ills.