Catch a Salmon and Live For 152 Years

The 1950's seem such a long time ago, but that is when my fishing life started.

Back then, the mouth of the Waimakariri River, just North of Christchurch, New Zealand, saw an annual salmon run. To a boy, it seemed that hundreds of anglers would line the banks, almost shoulder to shoulder. Using four-meter-long rods they would cast out diamond cut, chromed lures, and begin a long, slow retrieve, trying to bounce the lure along the bottom.

Occasionally, the rhythmic winding of one of the anglers stopped suddenly. The rod bent, and the fight began. The line of anglers broke apart to allow the angler fighting room. Using the heavy gear of those times, it required only a few minutes before a silver bright Salmon was skull-dragged up onto the beach.

Any landing produced a gathering of anglers, setting off a learned discussion of the merits of the fish, the specific lure used, and comments that the angler, "Always was a lucky bastard."

Regardless of the merits of the fish to the anglers, to this boy, the salmon lying there on the sand became a life's mission.

I began squirreling away meagre pocket money. Smoking, a recent, but well-hidden passion, was given up, for the first of many attempts in my life. 'Man' magazine, with, by today's standards, tame photos of lingerie clad ladies, secretly purchased from the bigger boys at school, were also put on hold.

Eventually, I had saved enough to take the trip into Kaiapoi, and buy a four meter length of Rangoon cane. Fibreglass rods had appeared but were way outside my price bracket at the time. The staff at the fishing counter at Blackwell's, gave me the guide rings, the binding thread, and varnish to turn the cane into a rod.

Their apparent generosity was repaid many times. They set me down a track of fishing tackle purchases that has stayed with me ever since.

For my birthday, my parents gave me a new Mitchell surf spinning reel. I bound the reel onto the rod with sash cord, as was the style of the day. Sash cord, bound round the rod, formed non-slip grips.

I was ready, but the salmon were not. It was some months until the salmon season began. Salmon or not, other fish were available, and training and skill building were needed.

The mouth of the Waimakariri formed a bar. Where the river met the sea, a hook of sand extended some 70 meters out into the surf, The surf would roll over this bar, and subside into deep pools behind the bar.

Huge schools of whitebait, and small herrings would use the surf to disguise their passage to and from the river and sea. They would hold in the pools behind the bar, and using the backwash of the waves, and the force of the river, would rush out through the surf, to the comparative safety of the deeper water.

These small fish had to rush. In early summer large schools of Kahawai would enter the surf feeding on the bait fish. Kahawai ghosted through the faces of waves that reared up prior to breaking.

These schools were an ideal training ground. I would wade out into the waist deep water on the bar and cast out to the Kahawai schools. It seemed that each cast would produce a fish. The Kahawai would strike at anything that flashed in the water.

Sometimes when the tide changed, then incoming water would force back the outflow from the river. The Kahawai would come over the bar to chase and harry the fish in the pools. At this point I would change tack, and cast across and back up the river. Still the Kahawai slashed at my lures.

When the salmon returned, so did some hard lessons. A twelve year old boy, no matter how keen, had no chance of gaining casting space in amongst the wall of grown ups. "Watch and learn, you'll get your chance."

So, it was back to the bar. None of the grown-ups fished there.

Chest waders were rare, and the danger of a wave slopping over the top of thigh waders, too big a price to pay. It was no problem to me. Wading wet was a way of life.

If the Kahawai could cross the bar and hold up in the pools behind, so could salmon, was my reasoning.

After about an hour of fruitless casting, I felt a gentle nudge on the line, and the line came up tight. No kahawai had ever put a bend in the rod like this fish. Slowly, I backed out off the bar, and on to the river bank.

The anglers lined up there, reluctantly made room. "Probably a bloody barracuda out there on the bar," was the general disparaging consensus.

The fish came into view, in the shallows, about 10 meters from shore. I did what everyone did back then, and begun to back up the beach pulling the fish with me.

"Here let me give you a hand, sonny," said a Voice beside me. The Voice grabbed the rod from my hand and started to back up the beach. He went too fast, too hard, and the lure, as it pulled from the salmon's mouth nearly hit me, and the Voice, as it flew back at supersonic speed. The fish rolled out of view, and took off to the deeper water.

"Hard luck," said the Voice. The crowd seemed to agree, and turned to resume casting. Stony faced and barely fighting back tears, I returned to the bar.

Sometime later, a long time later, I felt another nudge, and again the line came up tight. Once more, I backed up off the bar, and onto the beach. Less reluctantly this time the anglers parted. Once again, the fish came into view, in the shallows. Slowly I began to back away up the beach. "I'd better give you a hand," said the Voice.

"Don't you touch this bloody rod," I said, believing, probably rightly, that drastic measures, and from a lad in those times, drastic language, was required. The tactic worked, as did the slow backward walk up the beach. Soon my first salmon lay flopping on the beach.

"Well done," was the general cry from the crowd.

"He's a cheeky little bugger though," said the Voice, "I was only trying to help. Someone should teach him some manners."

"I guess that someone had better not be you," said Peter, a large Maori bloke, who had often joined me, fishing for kahawai, "taking anybody's rod, even a kid's without permission, is not on."

Pete's size precluded further discussion of the subject of manners, and the Voice trudged off down the beach, muttering something about, "the kids of today.....mumble, grumble."

Childhood memories are fickle at best, and today I have no real idea how big that first salmon was. I know that at twelve years old, the head of the fish was by my shoulder as I carried it down the beach with my hand in its gills, it's tail dragging on the ground. Mind you as I walked back, past all the grown up anglers, I was at least ten feet tall, and by regular account, "I always was a lucky little bastard."

Some reckon the gods have decreed that every day spent fishing is added to your life span. I have fished for over sixty years, and by my reckoning should live to fish until I am 152 years old, lucky bastard indeed. 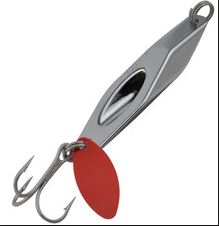 The temptation to go fishing can overcome even the most strong-willed of us - and he was sorely tempted.

Only three times had he made it to the river in the whole season, each time with little luck.
On the first occasion, a near gale made casting nigh on impossible.
On the second, a torrential downpour the day before, turned the river into a chocolate-brown torrent.
On the third, he flailed away all day without a touch, and now tomorrow, Sunday, was the last day of the season.

But how could he get away on Sunday?