Is The Temptation to Go Fishing Too Strong?

The temptation to go fishing can overcome even the most strong-willed of us - and he was sorely tempted.

He made it to the river only three times in this whole season, each time with little luck. On the first occasion, a near gale made casting nigh on impossible. On the second, a torrential downpour the day before, turned the river into a chocolate-brown torrent. On the third, he flailed away all day without a touch, and now tomorrow, Sunday, was the last day of the season.

But how could he get away on Sunday?

In his line of work Sunday was counted as a day you just had to front up. His boss made that fact very plain at the outset. It was a very important, non-negotiable part of his job specification and contract.

So each Sunday he would mount the pulpit, breath fire and brimstone, praise the virtuous, and damn the sinners to an eternity in hell-fire. Father Flutey waxed long and lyrical on the subject of resisting temptation, for resistance to temptation was the only true and straight road to the Pearly Gates.

Father Flutey’s ranting achieved almost cult status amongst the faithful. His sermons guaranteed to prop up the will of those yielding to the Devil’s dark designs.

But now Father Flutey approached a test of his own strength against the blandishments of a near overwhelming temptation. He struggled mightily, but finally he was overcome.

He picked up the phone, rang the Bishop’s office, and arranged for a stand-in Priest to cover his duties for tomorrow, Sunday, as he had to "travel to the bedside of an ailing close-relative." 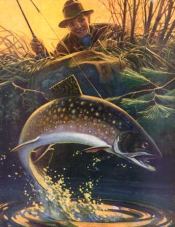 The next morning he was, as usual up before dawn, but definitely not as usual he skipped his morning prayers. Opening up a communication line to his boss a risk he just could not bring himself to take.

He collected his gear, grabbed some bread and cheese for lunch, filled the Thermos with tea, filled his hip flask with a fortifying Scottish libation, and all this deposited in his car he set off. He headed to a river over 100 kilometres away, hoping that distance would clear him from the possibility of recognition.

The drive was made doubly-long by pangs of guilt that erupted continually along the route. Several times he thought to turn back, but now committed he drove on to the river.

At the river conditions were just perfect.

The sun shone, there was no wind, and no other anglers. Heaven.

There were trout feeding voraciously on insects all over the pool. He began fishing, and soon was into fish. Absolutely brilliant fishing, all day, until he was nearing the time to return home.

Above, God was interrupted by a knock on the door, and an angel came into the office.

"Excuse me," said the angel, "have you seen what Father Flutey is up to?"

"Shouldn’t he be punished?" enquired the angel.

"Oh, he is about to be," replied God grimly, "watch the wrath of God in action."

Father Flutey was about to stop fishing when his eyes spotted the biggest trout he had ever seen. It was quietly moving just below the surface, sipping insects off the surface.

Now, trembling, not from the guilt of desertion from duty, but from sheer excitement as he watched the magnificent fish, he prepared to cast.

He nearly prayed that his cast would be perfect, but just in time he remembered that this might give the game away, so he relied on his own resources.

The cast was perfect. The fly drifting down onto the surface of the water just a metre in front of the fish. The fish glided up from beneath the fly and sipped it down.

Father Flutey uttered the obligatory, "thank you God," to give the fly time to be fully pulled inside the fish’s mouth, and then struck.

The fight was a long one, over 30 minutes. It raged up the pool, down the pool, across the pool and back again, sometimes the fish dogged down deep, sometimes it broke the surface.

It never jumped from the water it was simply too big. Finally the fish began to tire, and slowly Father Flutey edged the fish toward the shore.

He knew he could not use his net, it was too small, so he hoped to gently ‘beach’ the fish in the shallows. But each time the fish felt the bottom it bolted, and each time, Father Flutey, now beyond guilt and thoughts of punishment, prayed that the fish would stay hooked.

Finally the fish gave up all resistance and allowed itself to be gently moved into the shallows till it lay there on its side quietly, body heaving.

Father Flutey gazed down at the fish, in stunned amazement. The fish was well over 7 kilos (16lb), the fish of a lifetime. He simply could not take it all in, his heart pounded at the enormity of the fish, and his achievement.

His only regret that fact there were no other anglers to share in his moment of fishing glory.

Briefly, he considered killing the fish and having it mounted, but deciding against it, reached down, and twisted the hook from the trout’s mouth. Then gently he lifted and slid the fish into deeper water and he watched as it slowly swam away.

Even on high, the radiance of the Priest's satisfaction warmed the office.

"I thought you were going to punish him," pouted the angel, petulantly.

"I am just about to punish him, severely," replied God.

"By letting him catch a fish that is the stuff of dreams, a fish some fishermen would sell their soul to the Devil for, to coin a phrase. I simply do not understand," bleated the angel, "it does not look like punishment to me."

"Oh ye of little faith, it is a punishment all right," said God, smugly stroking her chin," in a moment Father Flutey will realise - who can he tell?"

Read about trout dying for a good photo here.