Buck Fever At The Sight Of Fish

In this over shackled world of ours, an occasional adrenal burst fuelled by buck fever is just great for the system.

A very pleasant evening. Very pleasant indeed. The sun was low, just beginning to redden the few clouds on the horizon. No breeze ruffled the water.

Throughout the late summer's afternoon, Mark Kitteridge and me caught many fish, but nothing of any size and not the quarry we sought. We caught Rudd, heaps of Rudd. Ruddy Rudd.

Each time the float bobbed and slid under the water hope rose, but invariably it was a Rudd, tiny Rudd. It was also getting very close to home time. Down to 'there must be time for just one more cast' time.

I think we both saw them at the same time. Two big dark-green shapes slowly meandering along close to the far bank. Carp! At last.

Separated from the far bank by a small stream mouth, and fishing under a canopy of Ti trees made long distance casting difficult.

Mark loaded a small handful of bread into his mouth and gave it a quick munch, and then with little delicacy spat it into his hand and threw it out to where we could cast our hooks. Hopefully we could entice the carp from the far bank to within our range.

We ripped out the centre of a slice of fresh bread and carefully moulded around the hook into a bell shape. The wide head of the 'bell' hung below the hook.

Out we cast, and waited till the float cocked upright under the weight of the split shot on the trace between the hook and the float.

Mark's bread berley was being savaged by fish; Rudd, again. But the carp were now there, mooching quietly about, occasionally sipping on the ground bait.

The sight was too much for us.

Out fired more bread ground-bait, slices of bread, sweet corn, chopped up luncheon sausage. The carp meandered around and about. Nudging, nosing our hook loaded baits, but disdaining them. The Rudd benefited from the carps' disdain.

We tried everything we knew, which for me was very little. This, my first coarse-fishing expedition. There was something I knew though, buck fever had struck again.

No matter what the fishing, no matter what fish being sought, the sight of your quarry in plain view, brings on the dreaded disease.

Here we were, Mark and I, two fishermen with at least seventy years fishing experience between us, standing on the bank of a very small lake, quivering with excitement and anticipation at the sight of two carp. Tossing everything we had at them. We did not hook these fish, too smart for our overheated efforts.

There you are quietly walking along the bank of a river and you spot him. Must be ten pounds at least, definitely ten pounds, not 4.5kg that would sound too small. He sits there, slowly moving slightly to one side or the other to pick up some morsel.

Then it starts, buck fever.

The symptoms are very evident. Out comes the fly box, and it drops, spilling the flies. How on earth can trout see nymphs in flowing water, when you cannot see them in the grass at your feet?

Finally you find one and tie it on. Despite the fever raging through your body, you test the knot, which slides undone. This is the same knot you have tied four-hundred-trillion-zillion times at a conservative estimate. The knot you can tie behind your back, with cold wet hands, in the dark. Re-tied, you move into position behind a bush to screen yourself from the fish, and plan your cast.

It is not a long cast, maybe only ten meters in all, to land the nymph seven meters above the fish. Plan decided, you slowly stand up and swing the line out, a couple of false casts to lengthen the line, and then into the final back cast.

Eyes riveted on your cast target you swing into the forward cast, but come up in a dead stop. You just knew the blackberries would get you didn't you? Well, you would, if buck fever had allowed you to note their presence.

Out you back from behind your cover and try to pull the line from the blackberries. The nymph too deep in the thorny clutches is sacrificed.

Another nymph tied on, you test the knot. Failed again. Not the knot, this time, but the leader. So you replace the leader which in its blackberry thorn nicked state would have probably lost the fish anyway. Bent backed, you return to the bush, peer over it.

Where's the fish? It's gone. Damn, and worse.

Standing up, and moving from behind the cover of the bush, you spot the fish moving back into its lie at just about exactly the same time it spots you. It bolts for the deep cover on the other side of the river. This time the fish is gone; for good.

Furious at yourself you look around and easily work out a much better casting position, with clear room for the back cast, and cover from the fish. A much better drift line too.

There are none so blind as those who will not see

One of buck fevers more insidious side effects is short term blindness to all that surrounds the sufferers. Something about, there are none so blind as those who will not see, springs to mind.

Another time and place, Kitteridge and me, again, with John Elliot of Daiwa. We arrived at Flat Rock, in Auckland's Hauraki Gulf, to the sight of yellowtail kingfish everywhere. Acres, actually hectares, of them. Boiling and bubbling all over the place.

Big kingis amongst them too. Instant buck fever.

Out came poppers, bloopers, chuggers, jigs, spinning lures, hexagon lures, - you name it. Each thrown, tossed, jigged and pulled. Nothing.

Eventually Mark Kitteridge went down to a tiny Stingsilda minnow lure and landed a very good kingi. But on the next cast another kingi took Mark's little lure, his only one, home to play. That was that. Seemed on that day size did matter.

I wondered after this episode what may have happened if we had calmed down at the sight of all these kingis and spent a little time trying to procure some live baits.

Failing that, some quieter contemplation and observation of the lolloping nature of the kingis on the surface, might have revealed their likely quarry.

The kingis were there when we arrived, still there many hours later when we left. Time was not the issue. Overheated, predatory over-heated blood definitely the issue. Ours; not the kingis.

Buck fever strikes at any old time there are visible fish.

Like the time you are motoring out to the 300 metre depth mark to start chasing marlin, and you come across a pod of bait fish being harassed by marlin. Panic stations. Out go the lures in double quick time.

Also what goes out, out the door, is good fishing practice. 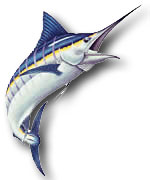 A marlin strikes and immediately breaks the line, tip-wrapped around a rod. Normally you would check, but not in your fevered state. Another lure takes off but no one notices until too late.

Someone forgot to set the ratchet. By the time you do notice it, the marlin decides it does not like the lure anyway and spits it back at the boat.

The third lure is merrily chugging away, and up behind streaks a marlin. A whack, a blat and nothing. Again the marlin comes in and in plain view scoffs down the lure. Just as quickly back out it comes. Again the marlin slashes at the lure, still no hook-up.

Must be something wrong with the hooks, you think, winding in. Something is wrong all right, very wrong. There are no hooks. Shackle-hooked rigs work very well when the shackle is done up. Hook-less, buck-fevered rigs do not.

Quickly another lure is grabbed and let out behind the boat to make sure it is running properly, and then the leader is let go. You watch the leader and lure sink away out of sight.

Would have been a good idea to attach the leader to the main line clip-swivel someone remarks. When you stop swearing, you agree.

There is only one cure for buck fever and that is to come to a dead stop. Stop what ever you are doing, take ten deep breaths, and think about what you are doing.

Then look at the fish, and forget the ten deep breathes you just took, and enjoy. In this over shackled world of ours, an occasional adrenal burst of buck fever is just great for the system.