How To Tie Fishing Knots Properly And Securely

Knot: A tangle with a name.

An - as yet unfulfilled - objective of mine is to catch a 13.5-kilo (30 lb.) snapper. I have come close a few times but never actually landed the really big one. Just off the Hen and Chicken Islands, off the East coast of the North, North Island of New Zealand a couple of years ago I thought I had finally cracked it.

It was not to be. My knot failed just as the fish neared the boat.

I could clearly see the huge snapper as it just rolled its head downward - that was all. Not a hard lunge - no vicious pull - just a roll away and down. It kept on going down, slowly but purposely. I stood there watching my rod that was now straight, and saw the line lying slack in the water.

Slowly I reeled in till the line-end lifted off the water. At the end of the trace was a little curl of line where the hook had been. That little curl irrefutable evidence that my knot had failed.

No amount of yelling, "Bother, golly, gosh, and darn it" could bring that fish back. No amount of "If only" could disguise the fact that my knot simply came undone.

Undertaking a personal debrief afterwards I realised the mistakes I made.

In my excitement and rush to get my new rig into the water I hurried tying on the hook.

All these factors contributed to the lost fish.

"But why didn't the knot come undone during the early part of the fight," you ask?

Very often under hard-fight conditions the tension and compression on the line is enough to hold the knot from slipping. However once the tension comes off, as in this case when the fish began to drift up toward the boat, the nylon line begins to recover its original non-stretched shape. The coils and twists that formed the knot become loose and the knot just quietly slips apart.

So what makes a good knot?

The Du Pont Company, the world's largest manufacturer of fishing line, has done an enormous amount of research into knots for monofilament and other types fishing line.

As a result of this research they established a set of guidelines that they use to determine whether a knot is suitable for them to recommend for their lines. It should be noted that these guidelines are for 'every day' knots.

So what is the best knot?

There are books full of knots, but amongst the best are the Uni knot and the cinch knot (sometimes called the blood knot). Both the Uni and the blood knots are quick and easy to tie, and both maintain overall line strength to over 85% of the lines original breaking strength.


But no matter which knot you choose there is one factor that remains true. If you do not practice tying the chosen knot so that you can tie it easily and securely, you will lose fish to knots coming undone.

Meaning one-knot, the Uni-knot is pretty much just what it says - you can use it for most knot tying situations. 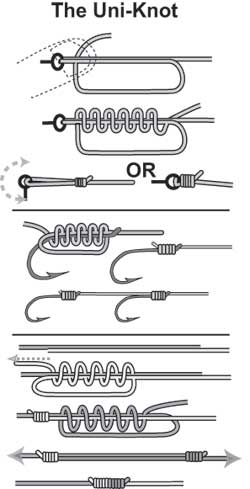 I use it for tying leaders to hooks (including snood knot), flies, lures, jigs and to join line. It has a knot strength when properly tied of over 95%.

When using the Uni-Knot to tie on flies, jigs, hooks or lures, you have two options. First you can pull the knot up tight to the eye of the hook, as most people do. 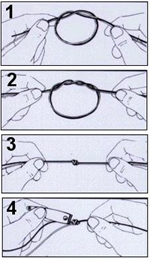 The double hitch or Surgeon's knot is a another quick and strong way to join line together - for example when you are assembling a leader, adding a trace etc., and to make loops in the leader butt to join the leader to the fly-line loop.

In fact never wet your knots, it is a myth founded in an old truth but now way past the time it should be thrown away with old line. (See below) 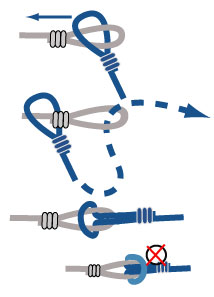 Alongside is a diagram of the way to correctly and without any possibility of screwing up, attach the leader-butt loop to the fly-line loop. Learn this way of making a loop to loop connection and you will never suffer from a break-off at the loop.

Practice Helper: If you are new to knot tying use some thin string to practice, it is easier to see what you are doing.

To Wet The Knot Or Not?

One of the more enduring myths, sadly perpetuated in the fishing books, magazines and videos - still being published today - is the 'wet your knot' myth.

When mono lines were first introduced, they were thick and stiff. The line surface was, by today's standards, very rough. Theory, (and it is just a unproven theory), was and in many cases still is,  is that pulling a knot up tight built up friction and hence heat.

Heat is a line killer. It reduces line strength markedly. Trouble is there is no evidence that pulling up a knot tight builds up anywhere near enough heat to damage the line.

Modern lines are more supple and thinner for similar breaking strains. They form into knots much more easily. The surface of modern line is very smooth, and has very little friction quotient.

It is because modern lines are thinner and more supple that you should not wet your knot - here is why.

The best method of tying a knot is to tie the knot carefully, ensuring there are no hidden line cross-overs. Then pull the knot up tight, slowly but firmly, allowing the twists to form-up properly. If you wet a knot there is a distinct danger of forming what is called a 'liar' knot.

A 'liar' knot is a knot that has not formed properly.

It looks the part, but its appearance is deceptive. Saliva allows the twists and turns to slide over themselves as the knot is tightened. Deep within a liar knot a piece of line has crossed over another piece. This will act like a scythe when the knot is jerked tight.

Fishing line is designed to achieve maximum strength in a straight pull. A knot by its very nature changes the direction of the pull. Each pull on the line reduces line strength at the knot.

It is a pain, especially in the midst of a good bite, but it is good practice to re-tie knots after landing, or losing a good fish. This is especially true when fishing lines of less than 10 kilo breaking strain. It is imperative to re-tie a knot that has secured any part of your terminal tackle to a snag to line-breaking point.

Just as important is to re-tie all knots before starting fishing. A knot left tied from the last fishing trip is a time bomb waiting to lose you the fish of a lifetime.