Just one more - a last word on the last cast 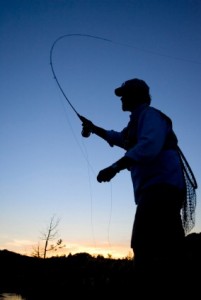 If it is true that the first can be the last, then it can also be true that a first last cast is not the last, last cast.

The day drew to a close. A deadline loomed. Not the usual, "I'll be home about then," deadline. No, much more serious than that. This was the guests for dinner, "and don't you dare be late again" restriction. An unbreakable deadline.

But the fishing had been slow. I fished the Leigh Harbour mouth, an hour and a bit North of Auckland, NZ, for kahawai on light spinning tackle. Most fish that jumped on the line, jumped off. The few that did not, deserved to grow to a size where in a year or two they might least put a small bend in the light rod.

So now it was down to finite timing. Given a fair wind, light traffic, no radar and speed cameras, there must be time for just one more cast.

Out flew the cast. Nothing. Surely there is time for just one more; the definite last. Out went this final cast and just as surely, nothing. Time for the absolute last, no nonsense final end last cast. Nothing, nil, zilch.

I could be a wee bit late surely? Probably expected.

Besides, to arrive on time might set a dangerous precedent. Out fired the very last definite 'one for the road' cast. Nothing. Then out of the corner of the eye, wasn't that a swirl on the water? Faint hope pushed a strong case for just one more. Out it went, and back it came, unmolested.

OK, deep breath, small prayer and time for the ultimate, 'the lucky last.' Out it went, back it came. The lucky last, unlucky.

The rest went pretty much to plan,
for those who are late.

The rocks, easily traversed on the way out all moved from their original locations. They became slippery, the footholds just that little bit further apart. Of course I slipped, and arrived at the car, wet to the waist.

I turned the car onto the main road, and into a long stream of crawling traffic. This day someone decreed that all the cattle trucks in this country would be on this road at the same time. Finally clear of the cattle trucks, freight trucks took over.

Probably by no coincidence a caravan driven by the dirty digit of destiny threw a wheel right at the bottom of the Waiwera Hill, halfway home. Traffic backed up for miles.

On arrival I expected a cool reception, but I was wrong.

'Cool' was far too mild a word. I met a cold dinner, colder stares, frigid tone of voice, and the icy-clear unstated promise of more frost when the guests left.

I was not wrong. All my excuses about the traffic, this time factual, meant nothing. Crawling into the fridge to get warm seemed a very viable option.

As a small aside, it has taken a great deal of time for it to finally dawn on me that telling small lies when it does not matter, about why I am late home from fishing, is pointless. It rebounds when you finally try to tell the truth.

Something about the boy who cried wolf too often springs to mind.

The danger of the last cast is not confined to straining relationships.

Eddy, the lad and I spent a fruitless day sitting in the tiny 'tinny' (Kiwi speak for an aluminium dinghy) chasing yellowtail kingfish. The huge berley trail we constructed was working well, but off the coast of Chile. The only fish we saw that day were our baits.

It was time to go. Way past time given the results of the day. I set about cleaning up the boat, ready to leave.

Still in his pre-teens, Eddy had not yet learned the futility of fishing for fish where fish are not. He decided to cast out one more bait, a snapper bait, 'just in case', while we cleaned up. Carefully he rigged a pillie and cast it a short distance from the boat. The bait hit the water, and Ed reached out to drop the rod in the holder, the rod in gear.

We both saw it at the same time.

A big kingi shot out from under the boat, grabbed the pillie, and departed at high speed. Ed off balance, and with pilchard-coated slippery hands had no chance. The rod slid from his hands, bounced once on the side of the boat, and disappeared.

The trouble with the last cast is that the timing of the cast is not always at the end of a fishing trip. The last cast can arrive with no warning. As the good book nearly said, the first shall be last.

For 40 minutes I bounced out to Takatu Point, from Sandspit, an hour North of Auckland, and anchored up. I set up the berley, and rigged up. I cast out the bait, and just as the bait hit the water, a steep wake-wave hit the tinny. The boat lurched, I reached out for side to hold on, dropped the rod, and over the side it went.

When the swearing stopped I reached for my second rod. Where was it? It could not have gone over the side, could it?

Even my declining powers of observation could soon work out that that if you cannot see a rod in a tinny, it is unlikely to be in the boat, there are not too many places for it to hide.

The gloom of my long slow trip back to Sandspit did not lift by finding my second rod right where I left it, still in the back of the car.

If it is true that the first can be the last, then it can also be true that first last cast is not the final cast.

To my eyes Lake Otamangakau, south of Taupo, central North Island, New Zealand, is not the most beautiful place on the planet in kind weather. In bad weather it is distinctly less that lovely. But the fish, that is the draw. Big fish. Hard to catch, but caught, what a reward.

This day the weather was plain awful. A freezing breeze blew a cold wet mist into every nook and corner of the lake, and through every pore and seam of my wet weather gear. The lake was grey and sullen. Nothing stirred, no birds, no fish, no other anglers. Any horror movie maker would love this scene.

For four hours I had slogged around the edge of the lake, casting to the merest hint of fish, to no avail. I could not even catch the weed.

Cold, damp, thoroughly disillusioned, and with an appointment looming back at the motel, I started to trudge back to the car. As I walked round the lake edge I spotted a tiny ripple some fifty metres along the beach. Just another methane bubble I grumbled as I trudged along. As I neared the area where I saw the ripple, another small ring waved across the surface.

"Just one cast, absolutely just one" I promised myself,
in fierce determination to fulfil this vow.

Out went the nymph, and it settled under the small indicator. I waited, gave the line a twitch, and waited, twitched and waited. I was just about to reel in, and may in fact begun to do so, when the indicator did not bob under the water, it slowly slid under, hardly making a ripple.

"Caught in the damn weed," I muttered to me, the only person listening.

I pulled up on the rod, and something pulled back hard, and fast. The fish fought deep and strong, but eventually I slid up the bank a beautiful hen that might have given 4 kilos (9lb) a distinct nudge.

As I released the fish I noticed many more ripples in the area. All over the area.

"Better have one more last cast" I said to my now very enthusiastic audience of me.

In the next half hour or so I landed two more trout, and hooked more, on a succession of last casts, until as suddenly as it livened up, the water returned to its sullen unmoving former self.

But now, a much more happy chappy, I strolled back to the car. As I neared it, the mist parted and the sun came out. As the sun turned the lake from surly to sparkling, the water in front of my parked car erupted in a frenzy of rises. Feeding fish everywhere.

"Just one more, I cannot leave this," I argued to my non-argumentative self.

Out went the nymph, and back it came, again and again. Out went new nymphs, followed by dry flies, and back they came, repeatedly. Dry fly and nymph combinations hit the water, followed by smelt flies; all spurned. Last cast after last cast tempted no fish, yet fish were feeding everywhere.

"OK, this is it, the very last cast," I promised myself, and out it went. I twitched it back a long way. There was just one or two metres of fly line out from the tip, when the water heaved and rolled as a very big fish pricked by the hook heaved half out of the water, and then raced back towards the deep. The line slashed off the water around my feet, and out through the guides.

My excitement knew no bounds, right up until the moment the line came up tight, very tight. Too tight. The leader cracked wickedly in the early evening quiet. Crushed, I lifted my foot up from where it firmly anchored one of the loose loops of line.

This cast now definitely my last.

Ban last casts I say. They are a pox and a blot. The despotism of deadlines should not extend to anglers. Hasn't it been decreed that every hour we spend fishing is added to our allotted life span? To cut back on fishing time is to cut back on life itself.

Too often I heard over the counter of my shop the complaint from a customer that they are doing too little fishing because they didn't have enough time. Arrant rubbish of course. We all get exactly the same amount of time. It is the priorities we set ourselves that get in the way. Silly inconsequential priorities like jobs, mortgages, families, ad nausea. To restrict ourselves further by tight deadlines, and frantic last casts, is foolish.

Besides, every last cast is actually a first cast. The first cast and first chance to catch the next fish. The next time you anguish about whether to make that last cast, forget it; the anguish that is, and cast away. The next fish caught on a last cast will not be the first.