5 Rules For Safely Releasing Fish To Maximize Chances Of Survival

Rule 1: Speed Does Not Kill

The faster you can get a fish to the boat, bank or shore the better its chances of survival. The longer the fight, the lower the chance of the fish surviving.

It is likely that the survival rates decrease exponentially as fight time increases. That is as fight-time goes up, survival chances decrease at an ever increasing rate.

If you fish on a catch-and-release basis you should use gear that will minimise the fight time.

Lifting a fish out of the water, dramatically decreases its survival chances. The longer a fish is out of the water its chances of survival decrease exponentially. Try and remove the hook with the fish still in the water.

If it is not possible to remove the hook while the fish is still in the water use a landing-net with a wide mesh, and a mesh made out of soft material.

Rough, hard netting will remove slime and scales from the fish, which is its natural protection against parasites and infection.

On bigger saltwater fish, it may be necessary to use a gaff. If so, try and gaff the fish from inside the mouth and out the lower jaw.

Lay the fish on a wet towel or cloth while the hook is removed. Covering the fish's eyes often helps to calm it down.

If you must touch the fish make sure your hands are wet or use a wet cloth or wet gloves between you and the fish.

Never touch a fish's gills, they are extremely delicate and just touching them can damage them. 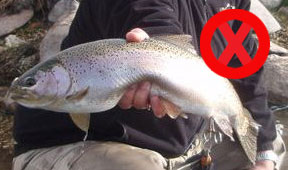 A Death Grip - almost guaranteed to injure or kill the fish.

If you must lift a fish in your hands, hold the fish under the gill latch in one hand, and just in front of the tail with the other.

Never, ever, not even once, lift a fish out of the water by holding the belly area. You will almost certainly damage internal organs. It reduces survival chances dramatically.

Never lay a trout on dry ground it will remove slime and allow the fish to be attacked by fungi and bacteria that can kill it.

Use a pair of forceps, long-nosed pliers, or a purpose made hook-out to quickly and efficiently remove the hook. If the fish is deeply hooked back in the throat or stomach cut the line as close to the hook as possible and leave the hook in the fish - it will probably do more damage trying to remove a deep hook than leaving it where it is.

Never, ever, not even once try to remove a hook through the gills.

Barbless hooks are also much easier to remove and do far less damage. You can flatten a barb with parallel jawed pliers.

Do not use treble or double hooks - these can really damage a fish, and can be very hard to remove.

If you are saltwater fishing try using circle hooks, which hook up most often in the corner of the jaw, and are much easier to remove.

Throwing a fish back into the water is likely to greatly decrease the fish's chances of survival.

The major problem with tossing a fish back into the water is that the fish can go into shock, and float belly-up. In the sea this is an open invitation to predators to attack. In a river the current will take the fish downstream and away from any chance of re-catching it and of reviving it. In a lake the fish can be out of reach, and die belly-up.

It is always better to gently cradle the fish in the water, head pointed upstream, until it moves off of its own accord. Never move the fish backwards and forwards in the water, it will damage the gills.

In a boat have the boat move slowly ahead while the fish is held, in a river hold the fish into the current. Never move the fish backwards and forwards, this damages the gills.

In both situations the fish will indicate it is OK by swimming out of your hands.

If you must take a photo do it very quickly - remember every second the fish is out of water is reducing the chances of its survival.

Don't pose and shoot - taking one shot, then reposing the shot and taking another, and so on will add to the time the fish is out of the water. Instead, just get the photographer to fire off a rapid series of ten or twelve shots in very quick succession - this is what the professionals do, and it is the reason they get better shots.

In these days of digital cameras there really is no excuse for taking one shot, re-posing...etc. Do the fish a favour and run off a 'bracket' of shots.

To repeat: never lay a trout on dry ground it will remove slime and allow the fish to be attacked by fungi and bacteria that can kill it.

So, you have landed the fish as quickly as possible to limit capture stress and you are about to pick up the fish and a get a few 'grip and grin' shots before release.

But, grip and grin, can all too often turn into grip and kill, and it is all down to where you grip, and how you grip, the trout that can determine its survival. Read the full story here.