How to Stop Reel Over-run or Backlash When Casting

There is a time when the dreaded reel backlash (bird's nest or over-run) strikes with more venom than most other times. 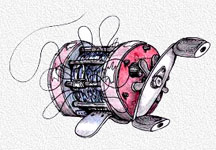 There you are in a red-hot bite, fish going nuts trying to engulf your hook ahead of the other fish in some vast school. You land a fish, whack on another bait or lure, and swing the rod, stopping in the direction you want the bait to go, and away it flies in a graceful arc.

Away it flies right up to the time the bait's flight is interrupted by the slithery fluffy-muffled rattle of a backlash under construction.

No obscenities tossed in the direction of the loose tangled-loops of line on the reel's spool seem to alleviate the situation, so you settle down to a half-hours worth of line and loop unpicking while your mates land fish after fish.

The mechanical principles behind building better backlashes are relatively simple, and once understood, the means of stopping them becomes clearer.

When a lure or bait is cast, the rod stops in the direction you want the bait or lure to go, and the acceleration provided by the rod straightening out sends the bait or the lure away on its journey. At the same time the line behind the bait or lure starts to try and pull line off the reel spool.

But the spools inertia resists the pull of the line. Finally the spool gives in to the relentless pressure of the line and it starts to spin, allowing line to follow the path of the bait or lure.

But the reel-spool extracts a price for allowing itself to be spun. It stores the energy it gained from its original inertia, and adds some extra centrifugal force to its storehouse as well.

There this force waits for the best time to do the most harm.

As soon as the lure or bait starts to slow down as it heads toward the water, the force on the line being pulled off the reel lessens. Now it is the first opportunity for the reel spool to wreak its havoc. If the spool is not slowed at this point it will carry on spinning - spewing out loose loops of line that wrap around, under and over each other, forming a backlash.

If the angler manages to get over this hurdle, the next chance for the spool to do some damage is when the lure or bait hits the water, and again no line is being pulled from the reel. As in the above paragraph, unless the reel spool is stopped at the same time it will go on spinning a wonderful web of loops.

Understanding the above principles should lead us to conclude that to avoid backlashes we need a system that allows the line spool to spin with the least amount of force to overcome inertia.

The less force required to overcome inertia, the less force is stored by the reel to use to keep spinning once the line is not pulling at the line-spool.

We also need a method to quickly and effectively slow the spool down, when the bait and lure slow down.

The first thing to consider is the reel itself. If you are planning to do a good deal of casting with a free-spool reel, you need to buy a reel that is up to the job.

A good casting reel should have the following features:

The reason that a good casting reel features a quick take-down to get to get at the line spool, is so the spool mechanics and the spool spindle can be properly lubricated with a fine oil - less is best.

The aim is to allow the spool to start spinning as freely as possible.

The spool-tensioning knob is used to achieve the same result. It should be adjusted so that the spool spins as freely as possible, without 'wobble'. I find the best way of achieving this is to hold the line spool gently between the thumb and forefinger and adjust the spool tensioning-knob until the spool moves just slightly from side to side, a mere frog's eyelash width is just right. The merest hint of a movement.

The shoulder on the line spool is critical.

Once the rod is cast and the lure or bait starts pulling line off the reel the angler must at the critical times slow the spool down; but with an often feather-light touch.

If the thumb is placed lightly on the outer coils of line on the reel spool, the stored energy in the line-spool will keep the spool spinning, and the layers of line just under the top few layers will spill out. This builds truly nightmarish birds nests.

The thumb must be placed on the spool shoulder not on the line.

What about backlash control devices?

There are a number of systems, but the two that have withstood the test of time are magnet based or centrifugal based systems. But it has been my experience that these are often more hindrance than help, and removing them actually assists in getting to grips with casting successfully more quickly.

Now the mechanicals are sorted what about the cast itself?

The first thing to be conscious of is to make the whole casting action as smooth as possible, right through the whole motion from whoa to go. Jerky actions tend to add to casting problems. It is important to give the action plenty of oomph.

Many people try to avoid backlash by casting 'lightly'. This probably leads to more backlashes than it cures.

If the line is only coming off the line-spool slowly, the line will start the spool spinning, but this will in itself 'stall' the lure or bait, and backlash building starts immediately.

Once the cast is made and the bait or lure is on the way toward its destination, it is usually only necessary to 'feather' the line spool once - at the top of the bait or lures trajectory.

As the bait or lure starts to curve downward toward the water it slows. 'Feathering' is lightly slowing the line-spool by applying a little pressure with the thumb to the shoulder of the spool to slow the spool-speed to the speed of the lure through the air. The idea is to slow the spool, not stop it.

Then when the bait or lure is about to hit the water, lock the thumb down on the shoulder of the spool to stop it completely.

Casting an overhead reel does take more skill than casting a spinning reel, but it is a relatively easy skill to acquire.

However there are some occasions where trying to cast an overhead reel can give more aggravation than congratulation. Casting into a strong breeze or wind is time to bring out the spinning gear. Casting very light or lightly weighted baits or lures is another.

If you do build a better backlash, and it does happen from time to time, the first thing to do is stop swearing, then do nothing and calm down, and think on this.

I have seen it too often to be funny. Someone builds a better bird's nest, and in frustration cuts the line and attempts to untangle the mess by threading the cut end over and under the tangle.

This is frustration negating clear thinking. How can the line coming off the spool and up the rod thread itself under and through the loops on the reel? It cannot of course.

Trying to thread the line under, over and through loops will achieve exactly the opposite of what you want. 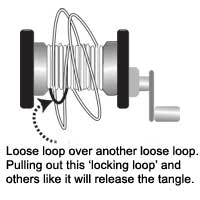 Most backlashes can be unpicked with some patience, usually in a relatively short time. A crochet hook, if you can find one to buy, helps unpicking no end. Try raiding Grandma's sewing box.

The trick is to pull gently on each loose loop until you find one that releases some line.

The key loops to find are the loops around the base of other loops - these loops at the base are the ones that bought everything to a halt. Then move onto more loops till you find another loop that will release some more line.

Sooner or later you will come across the loop that started the problem and as if by magic you are fishing again, often surprised by the short time taken to unpick the mess.

While you are unpicking the backlash, and your mates are happily catching fish around you, it may be a good time to reflect on what advantages you might have gained by doing some casting practice before going out fishing.

I had been doing some reading on tuna ‘cubing’ or ‘chunking’ (depending on whether the magazine was American or Australian) and a germ of an idea had formed.

The time for the idea to germinate had arrived.