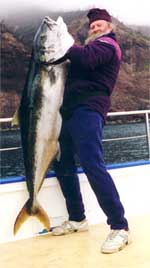 A truly great fighting fish, that fights right to the boat. Widely distributed throughout much of the world.

Virtually all the world records are held by New Zealand caught fish where they grow to prodigious size. (Except the records for the "Californian yellowtail" which is the same fish, but smaller. Why do they have a local record for a world-wide fish?

Is the IGFA going to have World records for trout caught in each river? Nonsense of course.

So is the two records for Kingfish! A world record is just that, the biggest fish of it's type in the world.