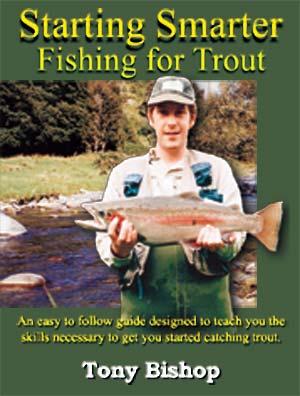 Starting Smarter - Trout Fishing is for the beginning trout fisherman and teaches all the skills necessary to become successful. Rather than repeat the same dreary platitudes that other instructional books have provided, Tony involves the reader and deals in an innovative and new way to explore the act of fishing from different perspectives with the one object of catching fish.

Tony is the author of the highly successful, Fishing Smarter, Fishing Smarter for Trout, Tips and Tricks to Catch More Fish, and Starting Smarter - Fishing in Salt Water. His first saltwater fishing book 'Fishing Smarter' has been reprinted every year since it was first published in 1997 (now rewritten and released as 'Fishing Even Smarter').

Most of Tony's articles and stories have a recurrent theme; an exploration of the many factors that determine the difference between success and failure to catch fish.

He has appeared on numerous fishing programs on television, and hosted radio programs.

Tony started fishing as a youngster around Christchurch, and then around the mouth of the Waimakariri River, where his family lived. In his late teens the family moved to Auckland and the rocks and beaches of Auckland and north Auckland became his fishing grounds, before heading out off-shore.

Despite working in the hectic world of marketing and sales management and helping to raise three sons, Tony managed to fit in plenty of fishing, both around New Zealand and overseas.

Finally opting out of the corporate rat-race - he opened, owned and operated one of New Zealand's most well known tackle shops, Just Fishin', in Auckland, for ten years till 1998.