How To Cast A Spinning Rod

When spinning you want about 20 to 45cm (18") of line out of the rod tip to the lure. This is not a fixed distance; you will need to adjust it to take account of the rod and the weight of the lure. But less ‘drop-back’, the distance between the rod tip and the lure, is usually better. 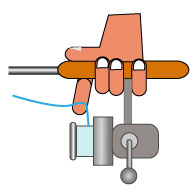 Your thumb should be lying along the top of the rod handle pointing toward the tip of the rod. The number of fingers on either side of the reel ‘stem’, which connects the reel to the handle, is determined by ensuring your forefinger is directly above the reel spool.

Using your opposite hand open the ‘bail arm’ which is the curved wire that picks up the line to wind line back in. Pushing the bail arm forward will open the arm.

Pick the line up immediately in front of the reel, with the tip of your forefinger of your casting hand. The weight of the lure should hold the line in place as you move through the cast.

Making sure that the reel stays below the rod throughout the cast, move the rod back behind your casting shoulder and stop. Then bring the rod rapidly forward and with a last second strong but small flick of the wrist, point the rod in the direction you want the lure to go, but aim 3 or 4 meters or more above that spot.

Once you have made the cast and flicked the wrist the rod should come to a dead stop. At this point the line should slip off your forefinger with no more input from you other than to straighten your finger to keep it out of the way while line loops off your reel.

Once the lure has hit the water flick the bail arm over to its original position, or turn the handle of the reel which should automatically engage the bail arm. Then start slowly winding in the lure. Easy eh?

With practice you can make casts with a spinning reel from all sorts of angles:

All these casts become easy after practice
- must be a message there somewhere.

One of the prime advantages that spinning gear has over fly-fishing gear is that you can use spinning gear in situations that would preclude casting a fly-rod - such as where there are over-hanging bushes and trees.