What Is, And Is Not, In This Trout Fishing Book

What I hope you will find in this book

Trout fishing is an activity that can provide some panel beating for a mind bashed and dinged by this frenetic world of ours. A few hours on the water, trying to catch a trout or two, soon repairs the brain.

For some there are two sports involved, fishing and catching fish.

The fishing part is just being there, on the water, away from it all. Some find this can become an end in itself. Back to nature, and if a fish comes along, great. Anyway, if all else fails this is a great way to explain a fishless trip.

Yes, I enjoy the river and the lake. Yes I enjoy getting away from it all, and New Zealand is one country in the World where pristine water and forest is still relatively easy to reach, but the reason I am there is to catch a fish.

So I will endure standing up to my testimonials in freezing cold water with ice forming on my rod's guides facing nature in the raw. But to endure this and not catch a fish? 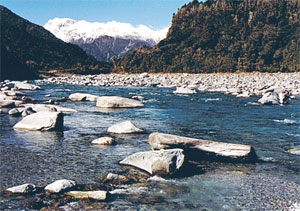 Trout fishing paradise in the South Island of New Zealand, worth the walk-in just to be there, but one of those fabled brute browns would really make the day.

I will enjoy the hike into the backcountry through blazing summer heat to reach a piece of water where it is assured that trout jump out of the water to reach the flies in the fly box in my vest. But to get there and not catch a fish?

I will love the long walk in my waders through the native bush toward the promise of that secret pool where the negative of the photo of its trout weighs 10 kilos.

Secret pool indeed! When you get there you realise the only secret about this pool is the name of the one fisherman on the planet who does not know its whereabouts. To get there and find there is no room to fish?

Give me a break. The reason I go fishing is to catch fish.

What I hope you will find in this book are ways to combine the peace and calm that comes with immersing yourself in the wonders of our natural world, with the supreme thrill of finding a fish, presenting a lure to it, and then hooking up. Now that to me is fishing – one sport.

What I hope you will not find in this book – Dogma

Most aspects of human endeavour have collected their share of dogma and cant. Trout fishing is one sport where a short-sighted, blinkered view of how things could and should be done is rife amongst a self appointed ‘elite’.

There are some in this sport of ours, thankfully only a very few, that consider it some kind of duty to mystify and ritualise trout fishing. Most of these seem to be in the fly-fishing fraternity. They try to imbue trout fishing with an almost religious mysticism, complete with rituals and conventions. These ‘purists’ attach themselves to one form of trout fishing and will brook no deviation from this ‘pure’ practice. Bah and humbug!

If you are new to fishing for trout and you encounter someone who tries to convert you to ‘one way’, quickly run one way – away.

But sometimes, it can take years for lessons learned on the water to filter through the dogma and cant that getting older seems to build up in the brain cells. We are supposed to get wiser with age. As my boys persist in reminding me, my broad mind and narrow waist have swapped places. A case in point.

My nearly teenage observations of trout swirling on the surface to take flies, moths and other UFOs had sparked a lot of reading on the subject of dry fly-fishing. Armed with a borrowed outfit I haunted the banks of the Waimakariri River, (South Island, New Zealand) trying to match the promise of the books to the reality of the river.

The Waimakariri is a classical shingle bottom, ribbon-streamed river of the Canterbury plains. Rivers like these did not fit the mould established in the dry fly books of the day. The chalk streams of the ‘Old Country’, were far cries from the Waimakariri.

But by riding along the banks of the river, I discovered pockets of water that bore some resemblance to the literature. The regular cycle of floods had cut semi-permanent channels alongside banks overhung with willows.

One such channel was about 10 to 15 metres wide. The left side ran alongside a high bank. The middle of the stream was littered with the remains of willows, toppled by the erosion of floods. At its deepest, the water was about 1 metre deep. The current moved relatively slowly.

This pool sparked my interest in dry fly-fishing. In late afternoons, I had regularly seen trout rising. My attempts to take these fish ended in failure. Using a wet fly produced too many snags for my meagre allowance available for flies and leaders to bear.

Now armed with a light rod, a floating line, some dry flies, and the confidence of book-learned knowledge, I headed for the pool.

My reading had convinced me that putting a line over a fish (‘lining’) was a cardinal sin and would lead to the trout bolting for cover. My experience had taught me that my casting skills were not of the standard required to fish the far side of the pool. The combination of these two factors forced me to target the midstream risers.

For some time I sat very still and watched for some pattern in the rises. Toward the middle of the pool was a thigh-thick branch lying along the bottom, in line with the current. A trout rose regularly to the far edge of a thin smear of suds travelling parallel to, but slightly on the far side, of the sunken log. Some further concentration finally revealed the fish, tucked in behind a short branch coming off the main log. I made a fly selection, settling on a coch-y-bondhu. It was not a truly inspired guess – it was all I had.

I pulled some line from the reel – enough I guessed to land the fly some 3 metres ahead of where the fish was lying.

My first cast could not have been better. The fly dropped gently down some 3 metres ahead of the fish and perhaps half a metre to my side of its lie. The drift was good, but the fish showed no interest.

Another cast, not as good as the first, but in roughly the right area, was treated with the same disdain as the first. Cast followed cast with no result. Throughout, the fish continued to rise regularly.

Frustration grew rapidly, but the fear of lining the fish overrode everything. I suppose I spent an hour on the fish, before I admitted defeat and moved down to the lower, narrower, reaches of the pool. Here I achieved some small success. Twice fish rose to the fly. My excitement overcame my book-learned instructions, to count to three, then strike. On each occasion the fly disappeared, my young, finely tuned reactions succeeded in pulling the fly into a near perfect back-cast, without the fish.

It was approaching time for me to return home, but I decided to take one last look at the fish I had spent so much time on earlier. It was still there, still feeding.

Carefully, I pulled line from the reel and made a cast. It was too long, and the fly ended up about half a metre on the far side of the foam line. I decided to let the fly drift as I thought that picking the line off the water would be worse than lining the fish.

It seemed like minutes before the fly, and the line, drifted down close to the fish. At any moment, I expected the fish to bolt. It did not bolt. It rose straight to the fly. At the very last moment, it swung away and down. I lifted the fly and cast again, this time back into the slot on my side of the foam line. Not a movement from the fish. I cast again and again, with no reaction from the fish.

I cast again, this time again, too long.

The fly drifted down the far side of the foam line. Again, I waited for the line to spook the fish, but it rose, the fly disappearing in a swirl.

This time I ignored the book advice to count to three, but took my fishing mentor, ‘Uncle’ Norm's advice, and said, aloud, “bloody hell, it’s a fish,” and then struck. The reaction was immediate, and spectacular. The trout rose from the water, flashing in the low-angled sunlight.

The fight was a short line, no quarter affair that soon had the trout safe and sound on the shingle. I lifted the fish to inspect my prize, and it was then that I noticed the fish was blind in one eye. 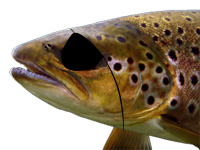 “Nelson” the trout was blind in the eye that had been facing me as it lay in its lie. Anything drifting down my side of the fish was invisible to it.

Since this episode I have noticed that if the fly-line drifts naturally, and the key is the word naturally, over a trout, there is little fear that trout will be disturbed. All kinds of rubbish, weed, branches, etc. drift past trout, without disturbing the fish. However, any movements out of the ordinary or perhaps more accurately, unnaturally, will send the fish scurrying for cover.

I am struck more and more often by the realisation that we humans love to make and apply rules to all sorts of activities, and fishing is no exception. Trouble is, we extend this desire to apply rules to try and cover creatures that have no knowledge of our rules. More damning of our arrogance is that we try to imbue wild animals, such as fish, with human traits that are derived from the human ability for abstract thought. Abstract thought, the ability to link apparently disparate things together to form a whole, is supposed to be the thing that separates us from animals.

If we continue to do things as we have always done them, we can only expect to get the results as we always have!

In fact Benjamin Franklin's definition of insanity was: “doing the same thing over and over and expecting different results.”