Trolling and Harling for Trout

The prime advantage, to some, of trolling and harling is the fact that an angler can cover a large amount of water in a lake and hopefully come across a fish or two. If you want to spend some time on the water motoring up and down, and perhaps nab a fish, this is as good a way to go as any. Can be quite pleasant on a fine sunny day, with your family or some good friends on the boat, especially as probably not too many fish will interrupt proceedings.

If you are serious about catching fish by harling or trolling then all the elements that go to catching trout by all other methods must be bought into play.

The same questions must be answered:

Like jigging – trolling and harling are just so much more effective if you use a sounder or fish-finder. And again just like jigging finding the depth at which fish are holding is critical to success.

If fish are working on or near the surface, setting the depth is not a problem. Using a lead, wire or fast sinking fly-line, let out enough of that line to sink the leader a metre or less under the surface. Use a fly or lure on a 25 metre or more leader. Boat speed should be as slow as possible, not much above a slow walk.

The major problem with trolling is to ensure that the fly or lure is set at the correct depth. Setting the depth is a combination of the type of sinking line used – wire, lead, or sinking fly-line – and the speed of the boat.

For a similar amount of line out, the faster the boat is moving, the shallower the line will be in the water. This is due to the increase in water pressure on the line. Only experience will ultimately give the clues as to what boat combination of factors will set the line at the correct depth.

If you have a sounder and you know the depth the fish are holding, and you hook-up you have a very good guide as to the depth the lures were running. Note the amount of line out and your speed. Over time you will build up a good database of speed-depth info.

To indicate just how important boat speed is to the depth of the line a little story. Some years ago I was trolling on Lake Tarawera with some friends who had invited me along for the day - the things I have to do.

We were trolling along deep water where a cliff dropped into the lake.

The wind was blowing along the cliff face, so in one direction we trolled downwind, in the other direction upwind.

Soon we began to notice that we caught fish on the upwind leg, but none on the downwind leg. The initial reaction was that it was something to do with the way the fish were facing, but soon common-sense took over. Going downwind our speed increased, so we pulled the lures up over the fish. Once we reduced boat speed on the downwind leg we began to catch fish going that way too.

When trolling with lures, especially Tasmanian Devil types, the tip of the trolling rod will usually 'nod' a short distance from side to side. If this side to side motion stops it is a sure sign that the lure has picked up some weed.

Confession time – catching trout on conventional trolling gear, lead, wire and other heavy lines is for me about exciting as watching metal rust.

It is not that I do not admire the skill and knowledge of good practitioners of the art, it is just that once a fish is hooked there is no sport at all.

One day I was persuaded to go out trolling with some friends on Lake Taupo. We were fishing to very deep holding fish, so we had two joined lead-lines all the way out. Finally a trout jumped on my designated line, so I picked up the rod and did nothing.

Despite some rumblings amongst the crew I waited a full minute till the trout finally dragged all that lead-line to the surface where it half-heartedly swam about near the surface and finally just finned along quietly. I wound the line in with no resistance from the fish what-so-ever.

The trout was an average Taupo rainbow of around 2.2kg(4.5lb). The weight of the two lead-lines was 600g or 27% of the body-weight of the fish, excluding the drag from the resistance of the water on the line. Boring!

But fishing light lines off a downrigger – now that is another thing altogether. 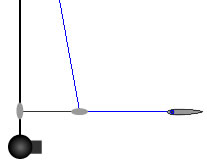 Of course downriggers range from the basic to those with all the bells and whistles. But really the only bell or whistle you need on a downrigger is a depth counter to let you know at what depth you are fishing.

Here is some good news and bad news – the bad news first. 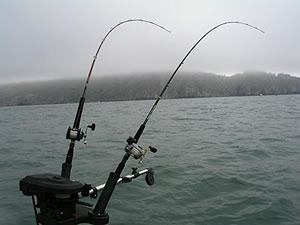 Downrigger rods really need to be quite different from traditional trolling rods. They should be at least 2.5 metres long and have a soft tip section. When the downrigger weight is lowered you feed out line from the fishing reel as the weight goes down. Once the weight is down the rod is placed in the rod holder on the downrigger. You should then wind the rod reel so that the tip of the rod is pulled down into a good curve.

When a fish hits a lure or fly off a downrigger there is so much inherent slack in the system that there is little visual indication anything is going on below until too late. By pulling the rod tip down as described, if a fish hits a lure or fly and pulls it out of the downrigger line clip the rod will spring up straight indicating what is going on below. The rod straightening will remove some slack and will help to set the hook.

The good news? Downrigger rods can double as jigging rods, which is heaps more fun anyway.