How Not To Break A Fishing Rod

Used properly, and within the line breaking strain limits, rods rarely break, but add a fisherman and all things become possible.

There was a certain elegant symmetry to the act of breaking the rod.

The rod came to a halt on the backcast, and the line carried on its way to the rear. As I felt the weight come on the rod, I leant into the forward cast. At that point the weight really came on - and on. Something was going to give, and it did. The rod broke cleanly about a third of its way down its length.

As is their way, from deep in the bowels of one impenetrable clump of this fiendish plant, a long tendril reached out and wrapped itself around the fly and the line. It hung on until the pressure on the rod could no longer be sustained. Yet another rod breakage in a long line of minor catastrophes.

Breaking a rod can take many forms, and I have seen a wide spread of methods - and tried many of the methods myself - some with commendable success.

Some rod breakages can be achieved with spectacular results.

Like the time I was in Fiji and in excited expectation of doing a spot of light spinning over a sand-flat next morning, was setting up my gear. The job finished I stood up to place the rod in the corner of the room. My little world exploded in a machine-gun like burst of sound followed in short order by the flying shrapnel of the tip section of my rod.

I have not tried the next method, but have had it on good authority from people who have witnessed the event, that a rod raised into helicopter blades is prime contender for a top spot in the most spectacular stakes.

If handled right, and it does take some special skills, breaking a rod by heaving back on a snagged line can have spectacular results.

Especially spectacular if the angler is fishing on rocks, and full balance can only be achieved with difficulty. The line snags so the angler winds out the slack and then rears back on the rod. The rod breaks, and the sudden slack tosses the angler backward into a graceful arc. An arc only terminated by the contact of rocks with various parts of the body. A bit of blood can add resonance to the whole business.

All it needed was to put the rod down, wrap a towel or such-like around the hand, then wind the line around the cloth, and pull till something gives.

Actually, the rearing back on a snag can work well in boats, especially if sea conditions are a little bobbly.

Rear back on the rod, preferably while slightly off-balance, and when something gives, go careering across the deck until something stops your progress. The far-side gunwale is good, especially if your head can come into contact with the said transom. But failing that, coming into contact with one or more of your fishing crew can lead to some merry tangles.

To make this method particularly telling, time your snag-pulling trick to coincide with one of the crew cutting up bait. A knife slashing about can add some real drama to the scene.

While out on the boat another good rod-breaking trick to try is to rest the rod on the gunwale of the boat.

You can do this in two ways:

The first is to rest the rod on the gunwale while you lounge back in your seat, idly listening to talk-back radio. (This will guarantee your senses will be dulled.) Make sure the rod is leaning on the gunwale round about two thirds of the way up the rod, but anywhere from halfway can do. Then all you have to do is wait.

Eventually that big'un you have been dreaming about will come along and grab you bait and motor off into the gloom. Down slashes the rod tip, down and down and down. Something gives and it is your rod. So you get on the cell-phone and ring up the talk-back radio station and send out a serve about the poor quality of rods today.

The second is to lean the rod on the gunwale when you get tired fighting a good size fish. Again, make sure around half the rod is on your side of the gunwale or rail. When the fish makes a sudden rush for the bottom the rod can snap with remarkable noise.

This method can be moved into the truly noteworthy if as the rod breaks, the line is cut off on the edge of the break. The shattered stump of the rod can fly back and produce some nice scars in the facial region. Good story to tell your Grandchildren.

Blame too many fishing programmes on TV for the next item in the list. 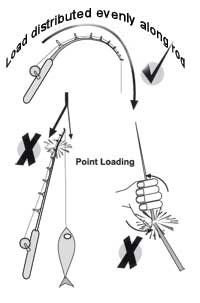 As the fish nears the boat grab the rod a foot or two from the tip and lean over the side to net, gaff or pick up the fish. Then watch as the fish gets a second wind and dives for the bottom. Watch and feel the rod break in or near your hand.

No you don't see the breaking part on TV - the sponsors would not like that!

A close cousin to the above method is to lift the rod tip to near vertical to lift a fish closer to the boat, net or rocks.

All the weight is then concentrated down the rod instead of along it.

This particular method produces a beautiful splayed fibre effect at the broken ends. Makes it a bit hard to convince the shop where you bought the rod that "it just broke while I was fighting a fish, and I was only using 10kg line."

While you are in the shop, you can make the staff dart about in frantic movements toward you, if you pick up a bright shiny-new rod and use the good-old thumb test.

To use this method, grab the rod near the tip in the palm of you hand, with your thumb down the rod. (Like a thumbs-down sign). Then pull back with your hand and push forward with your thumb. Great stuff.

All that force concentrated under your thumb at the slim end of the rod can do wonders to increase your credit card debt.

It would be too difficult to outline all the methods of successfully breaking a rod in one article. The tyranny of space restricts me from giving any decent coverage of tried and true methods such as, the leaving the rods in the rocket launcher and driving under a low bridge or tree. Leaving rods lying down on the rocks, deck or ground is another winner, a winner that has strained friendships.

Walking along with a surf or fly rod tip low to the ground is efficient. All you have to do is find a tree root, or slippery rock, fall forward a couple of feet and watch the rod tip fail in its new mission as a stake in the ground.

It is not all bad. I could not guess how many rods I have owned over the years, but I still have over twenty.

In all my sixty-plus years of fishing, I guess that I have broken no more than 7 or 8 rods, and all bar one were my fault. Just poke a pin anywhere in the catalogue of methods above and I probably have managed that method one or its close cousins.

There was one rod I did break that was due to a fault in the rod. It was brand new and never been fished. There is a clue here.

Rods, if there is a fault, usually fail within the first use or two under load.

(Good tackle outlets will have put a bend in every rod they are about to put in the rod racks.) If a rod that you have fished with for a month or two and put some pressure on breaks suddenly, look for operator error. Has the rod been hit with something - say a flying sinker or heavy nymph or has it been strained by leaning it over a gunwale.

To repeat, used properly, and within the line breaking strain limits, rods rarely break, but add a fisherman into the equation and all things become possible. Adds a little more spice to fishing life.