Many recreational or sport fishermen will jump up and down about any attempts to reduce our ‘right’ to be able to take to our waters and catch a feed of fresh fish. It is part of the fishing culture, with a capital K.

Then how come so many of those who rabbit on so vociferously about this right, bring back fish for the table that is often an inedible mush – a pale travesty of the genuine delight available by serving truly fresh fish?

Every summer the following sad story will be repeated ad nausea - and nausea is the right word – around New Zealand's coast and around the world.

The crew sets out in the morning and over the next four or five hours catches a feed of fish. As they are caught, the fish are chucked into the fish bin where they flap and struggle as they slowly drown in the air. As more fish are caught they are thrown on top of the fish already dead and dying in the bin. 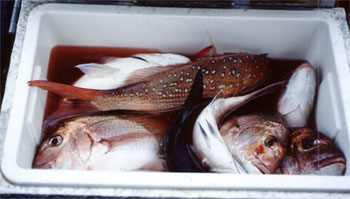 By the time this bin of fish gets to shore it should not be eaten. The fish have 'cooked' in their own blood and slime. What a waste!

By the time our intrepid crew get back to the bach, crib, campsite or home, the fish is a smelly, slimy mess.

Cleaning and preparing the fish to cook is a long slow job – the soggy, flabby-fleshed bundles of slime are hard to handle.

But eventually fish fillets make their way into the fry pan where foul cooking smells begin to fill every nook and cranny in the immediate vicinity. The whole performance, in a word, disgusting.

It is a sad fact is that much of the fish served up by amateur fishermen is passed its used-by-date. By the time it reaches the table it is well on the way to being rotten.

Many fishermen would be better advised to go fishing on an exclusively catch-and-release basis, and buy some fish to eat on the way home at the fish shop. The fish in the shop would be in better condition – the shop would not be allowed to sell (apart from legal problems) the amateur’s catch because of it's poor condition.

Fact is – if we have any right to demand a share in the way our fishery is managed, and that a significant share of that fishery is reserved to ensure that recreational and sport fishers can indeed continue to catch a feed of fish – then it is also true that we must use our share with care.

That share must not only be controlled and managed by the obvious measures such as catch limits, etc., but also by ensuring that the fish we choose to take to the table is in prime eating condition.

If you were buying fish at the fish shop, the rules for checking the condition of the fish are simple.

There is no reason why the fish we catch at sea cannot be in prime condition when we start preparing it for the table. The simple facts are that to produce table fish in prime condition to be served is a very simple process of just five easy steps.

Second step
– as fish come over the side, kill them straight away with, preferably an 'Iki stick' (sharp implement for killing a fish - a sharpened screwdriver works well) into the brain, or a solid whack over the eyes with a club.

Third step
– slop some water into a fish bin, add plenty of ice, and drop the dead fish into this 'slurry' as they come aboard. Keep adding ice regularly.

Fourth step
– at any break in the action remove the stomach and gills and drop the fish back into the slurry, or move to step five.

Fifth step
– at home time, remove the fish from the slurry, and pack into the 'chilly bin' (insulated container) or another fish bin, ensuring that each fish is well covered with ice, and the gill and stomach cavities are also filled with ice.

When the time comes to prepare the fish for the table, the job is much easier and much more pleasant.

The fish will not be slimy so it is easier (and safer) to handle. Because the flesh is chilled down, cutting and slicing is much easier and more efficient. Filleting especially is a breeze.

Many people, who have trouble filleting fish, have this trouble because the fish they are trying to fillet is so hard to handle because of slime and soft flesh. Making clean sweeping cuts is much easier through flesh that has the consistency of soft balsa wood.

The job will be more pleasant because there will be little or no stink of fish. Lack of complaints from family and friends will be a bonus.

The cooking fish will smell appetizing, not off-putting.

I know many people who do not like eating fish because of bad experiences in the past from the smell of cooking rank fish. Smell is an integral part of taste – bad smell equals bad taste – that is what our brain tells us.

But by far and away the biggest bonus will be in the taste.

There is little to compare with the taste of fish that has been well cared for since capture, especially fish that we have caught ourselves. For me that is one of the true joys of fishing.

Despite the very real problems in our saltwater fisheries, in comparison with most other places in the world our fishery is a dream fishery. The ability to take to the sea with a realistic anticipation of hooking into a feed of fish is one of the things that make New Zealand unique.

To poorly treat  the fish we choose to keep for the table is an abuse of this right and privilege.