How to catch kahawai - a Top New Zealand sportfish - Part 1

Kahawai (Arripis trutta) are a tremendous sportfish; found only in New Zealand and Australia (where for some unknown reason it is called 'salmon').

Most kahawai weigh between 1kg (2lb) and 2.5kg (5lb)*, but they fight well above their weight class. Pound for pound, kahawai, if fished on appropriate gear, are one of the hardest fighting sportfish in any ocean.

There are few sights that stir the fishing blood more than a school of kahawai in full attack mode. When they are really on the bite, kahawai can be almost too easy to catch, but some days they can drive anglers to distraction by their fickleness. Despite the sight of fish slashing and splashing after bait-fish kahawai can be particularly fussy about what they will and will not eat.

There was a move some years ago to try and promote kahawai as ‘sea trout’ to try and attract American anglers. Kahawai is superficially similar to the fish called ‘sea trout’ in the USA, but are no relation.

But the name 'sea trout' has a more pertinent meaning to New Zealand anglers.

There is a saying in trout fishing circles that goes, ‘match the hatch’. Match the hatch means to present the trout with a fly or lure that closely matches the insects or small fish they are feeding on. Sometimes trout can be extraordinarily single-minded about the food they are eating.

Kahawai can be very much the same, and ‘matching the hatch’ has some meaning in the sea.

Kahawai often school in an iceberg shape. The fish that are showing on the surface may represent only a small percentage of the total school, which is invisible under the water.

It is a common sight; a school of kahawai is clearly visible working on the surface, and it soon attracts a fleet of boats that charge into the middle of the school, trolling lures. The school quickly disappears. Put down by the boats in their midst.

Then follows a game of catch-me-if-you-can; the school ducks and dives all over the place with the flotilla of boats chasing them, charging about; soon this will put the school down for good. 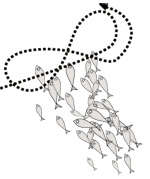 Trolling for kahawai does produce hook-ups; however it can be the least successful method of catching these fish. If you must troll, approach the school carefully, racing up at full throttle is an ideal method of putting the school down.

The best method is to quietly approach the school from behind and in the direction the school is moving, and move the boat so that the lure intersects the school, not the boat.

A 'figure-eight' trolling pattern will achieve this aim. Remember the iceberg theory. Often you can pick up fish some way off the visible surface activity.

Lures for trolling should ideally match the size of the food the kahawai are chasing. My personal favourite is a metal jig only about 40 mm long, from the Stingsilda range, but there are lures of similar size and shape, in tackle shops. Trolling these small lures behind a diving trolling-board seems to produce well.

Another lure that will do the trick when kahawai are being fickle is a saltwater fly, again trolled behind a diving board. The fly, once wet forms the shape and size of whitebait and small infant pilchards, and the like.

If you troll for trout, drag out some of your trout lures. Toby's and Tasmanian Devil lures work well. Just as in freshwater, the addition of a fly about 20 cm behind the lure makes the lure even more attractive.

I find that when trolling at these low speeds a couple of twitches on the line, either by jerking the rod tip, or by giving the line itself a short sharp pull, often triggers strikes. However don't take walking-pace trolling speed as a hard and fast rule.

You need to match the trolling speed to the speed the kahawai are moving at, and sometimes they can move at a fair clip.

There are many diving trolling-lures that catch kahawai. The bibbed lures of the Rapala type all take fish; in general, the smaller the better. Lures around 40 to 60 mm long seem to work best. Using bibbed lures of this size means tackle must be light. Anything over a line weight of around 6kg (12lb) will kill the action of the lure.

Footnote: Kahawai can grow well above the usual size, and specimens reaching just over 20 lb. have been recorded.