Where To Find Trout In Lakes, Rivers And Streams?

First step – get the books, get on the net and visit a local tackle store

The first part of answering the question “where do I find trout” is easy – in the water. And finding water that holds trout is just about as easy – get the books,  or get on the Net.

For a fish only introduced to New Zealand about 100 years ago, the trout has done a good job of colonising many of our waterways. They can be found from Northland, to the heart of Auckland’s North Shore, and right down through both islands.

There are three books that cover just about every piece of trout-holding water in this country (New Zealand):

All three of these books, and the web site, will direct anglers to water that holds trout – that is the easy part. Finding trout in the water they live in – now there is the part that is just a tad more difficult.

In fact, most often, it is this one factor that separates the 10% of fishermen who catch 90% of the fish, from others.

Here is a piece of information all fishermen need to know – at any one time, trout are found in less than 10% of the overall water they live in – often in much less than 10%.

This is an important piece of info. In any river, stream or lake only 10% or less of the all that water will contain trout. No matter what follows in this book about how to catch trout, in fact no matter how many books or magazines you read, how-to videos you watch, and how many web-sites you visit, two things will remain true:

No matter what method of trout fishing you use, no matter where you use that method – stream, river or lake – identifying the most likely place where trout could be holding at any one time is the key to increasing your catch rate. In fact no matter how good you become at the technique of casting a fly or spinning lure, at jigging, harling or trolling, all this technical expertise will be useless if you do not learn to fish where the fish are, more often.

To repeat myself; this is one of the key factors, if not the one key factor, that separates the 10% of fishermen who catch 90% of the fish from the others. They fish where fish are most often.

To emphasise the point even further - good fishermen (the 10%), are usually not just good fishermen in water they know. Take them to a new river, stream or lake and they will get amongst fish quicker than others. Why?

In fact nearly all trout water has three main features: 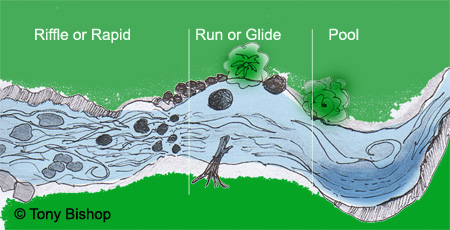 The diagram nearby shows a typical set-up of a stream or river. The current flows from left to right across the page. The riffle is shallow water flowing quickly around boulders and rocks. The run is deeper water with a calmer surface. The pool is below the run, the deepest water with less current.

In a small stream the riffle, run, pool ‘set’ can be less than a 100 metres from whoa to go, on a big river the set could many hundreds of metres – if not kilometres.

In the braided-shingle rivers of the lower North Island and South Island the individual ‘ribbons’ of the river branches often contain these same sets – riffles, runs and pools.

Heads or Tails - Or Both?

The part of the river or stream where water enters of exits a feature such as a riffle, run or pool, is called the ‘Head’ (entry) or the ‘Tail’ (exit). This has the potential to cause some confusion.

For instance if you have a run emptying into a pool, the tail of the run is also the head of the pool. So if you were describing a tail section of a pool, it is usual to describe it in full, in this case “the tail of the pool”. I use this convention in this book.

On many of New Zealand's more famous rivers some of the waters that consistently produce fish have been named. For instance on the Tongariro River there are a number of named areas – Judges Pool, Major Jones Pool, Bridge Pool, etc. There are many more.

Often when anglers refer to so-and-so pool they are in fact referring to a section of a river that can consistently contain a high number of fish in various lies. Some of these ‘pools’, can be up to a 100 or more metres in length, and contain many lies in a variety of water types.

In this book I use the word pool to describe an area of deeper, slow moving water, not in the more generic sense of named ‘pools’.

‘Lie’ is the name for the places where trout can be found in water – as well as the lies fishermen tell when they don’t catch fish because they couldn’t find the trout lies!

Despite a human-bred reputation for cunning – trout are about as thick as a ditch-digger’s sandwich. A ten-pound trout has a brain smaller than a pea. So a trout’s life is reduced to very simple basics.

To survive successfully trout need three factors, food, shelter and an environment that will sustain their physiology:

‘Prime lies’ are the lies that offer the best shelter, close to a good food source.

No matter where trout lies are found – in rivers, streams or lakes – in riffles, runs or pools – all lies will have all the above characteristics most of the time.

What do you do when you have found trout? Read the Ten Commandments of Stealth, a very good article on the subject. 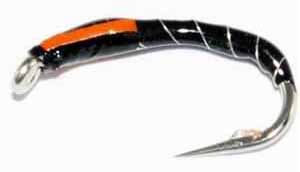